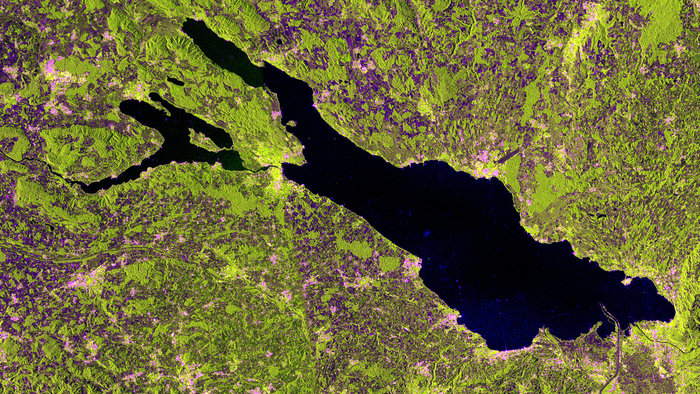 The freshwater Lake Constance in Central Europe is pictured in this image from the Sentinel-1A satellite.

Formed by the Rhine Glacier during the last Ice Age, it covers an area of about 540 sq km and is an important source of drinking water for southwestern Germany.

The lake has shorelines in three countries: Germany to the north, Switzerland to the south and Austria at its eastern end. Over the water body, however, there are no borders because there is no legally binding agreement on where they lie.

In the lower-right, we can see where the Rhine river flows into the lake from the south, which then flows out of the lake to the west (left). This and other rivers carry sediments from the Alps, extending the coastline and decreasing the lake’s water depth.

The runways of Germany’s Friedrichshafen Airport are visible in the right section of the image. The Aviation & Aerospace Museum is nearby.

This image was acquired on 10 May in ‘interferometric wide swath mode’ and in dual polarisation.

The radar instrument gathers information in either horizontal or vertical radar pulses, and colours were assigned to the different types. In this image, buildings generally appear pink, while vegetation is green. Areas with lowest reflectivity in all polarisations appear very dark, like the water.

Sentinel-1A’s radar is still being calibrated following its 3 April 2014 launch, but early images like this give us a glimpse of the kind of operational imagery that this mission will provide for Europe’s Copernicus environmental monitoring programme.