CLOUDTOP PHENOMENON: For years, researchers have been studying red sprites and blue jets--strange forms of lightning that come out of the tops of clouds. On May 27th, a new form appeared. Pilot Cherdphong Visarathanonth was in the cockpit of an A320 at the airport in Bangkok, Thailand, when he saw a white tornado-like beam dancing atop this cumulonimbus cloud: 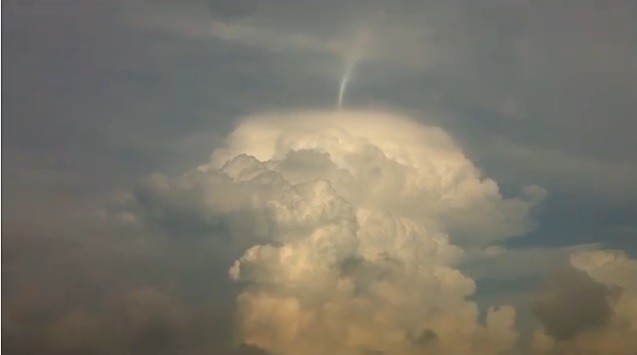 "We could see the same phenomenon through both windshields even after the aircraft has pushing back in a different direction," says Visarathanonth. "I made a 4 minute video in which we can see the phenomenon quickly moving and disappearing from time to time."

Brian Whittaker, another pilot with extensive sky watching experience, says, "I have seen Blue Jets and Sprites, but this is something totally different. Good luck figuring out what it is."

One reader suggests that it is a "jumping sundog." Lightning discharges in thunderclouds can temporarily change the electric field above the clouds where charged ice crystals were reflecting sunlight. The new electric field quickly re-orients the geometric crystals to a new orientation that reflects sunlight differently. Videos of the phenomenon show that it might be related to what Visarathanonth saw.

Other ideas are welcomed. If you have one, post it in the comments section of Visarathanonth's Space Weather Gallery page.