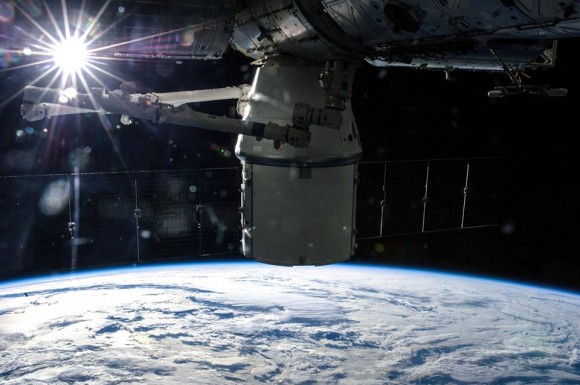 SpaceX CEO Elon Musk to Unveil Manned Dragon ‘Space Taxi’ on May 29
.
SpaceX CEO, founder and chief designer Elon Musk is set to unveil the manned version of his firms commercial Dragon spaceship later this week, setting in motion an effort that he hopes will soon restore America’s capability to launch US astronauts to low Earth orbit and the International Space Station (ISS) by 2017.
Musk will personally introduce SpaceX’s ‘Space Taxi’ dubbed ‘Dragon V2’ at what amounts to sort of a world premiere event on May 29 at the company’s headquarters in Hawthorne, CA, according to an official announcement this evening (May 27) from SpaceX.
“SpaceX’s new Dragon V2 spacecraft is a next generation spacecraft designed to carry astronauts into space,” according to the SpaceX statement.
The manned Dragon will launch atop the powerful SpaceX Falcon 9 v1.1 rocket from a SpaceX pad on the Florida Space Coast.
Dragon was initially developed as a commercial unmanned resupply freighter to deliver 20,000 kg (44,000 pounds) of supplies and science experiments to the ISS under a $1.6 Billion Commercial Resupply Services (CRS) contract with NASA during a dozen Dragon cargo spacecraft flights through 2016.
Musk is making good on a recent comment he posted to twitter on April 29, with respect to the continuing fallout from the deadly crisis in Ukraine which has resulted in some US economic sanctions imposed against Russia, that now potentially threaten US access to the ISS in a boomerang action from the Russian government:
“Sounds like this might be a good time to unveil the new Dragon Mk 2 spaceship that @SpaceX has been working on with @NASA. No trampoline needed,” Musk tweeted.
The ‘Dragon V2’ is an upgraded, man rated version of the unmanned spaceship that can carry a mix of cargo and up to a seven crewmembers to the ISS.
. 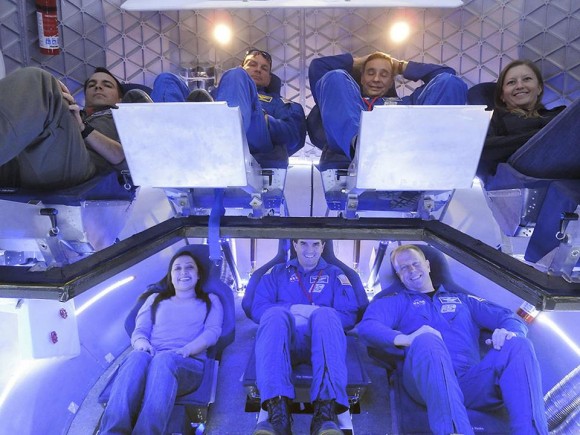 NASA astronauts and industry experts check out the crew accommodations in the Dragon spacecraft under development by SpaceX. The evaluation in Hawthorne, Calif., on Jan. 30, 2012, was part of SpaceX’s Commercial Crew Development Round 2 agreement with NASA’s Commercial Crew Program. Credit: NASA
.
Dragon is among a trio of US private sector manned spaceships being developed with seed money from NASA’s Commercial Crew Program in a public/private partnership to develop a next-generation crew transportation vehicle to ferry astronauts to and from the ISS by 2017 – a capability totally lost following the space shuttle’s forced retirement in 2011.
Since that day, US astronauts have been totally dependent on the Russian Soyuz capsules for ferry rides to orbit and back.
The Boeing CST-100 and Sierra Nevada Dream Chaser ‘space taxis’ are also vying for funding in the next round of contracts to be awarded by NASA around late summer 2014.
All three company’s have been making excellent progress in meeting their NASA mandated milestones in the current contract period known as Commercial Crew Integrated Capability initiative (CCiCAP) under the auspices of NASA’s Commercial Crew Program.
However, US progress getting the space taxis actually built and flying has been repeatedly stifled by the US Congress who have severely cut NASA’s budget request for the Commercial Crew Program by about half each year. Thus forcing NASA to delay the first manned orbital test flights by at least 18 months from 2015 to 2017.
The situation with regard to US dependency on Russian rocketry to reach the ISS has always been awkward.
But it finally took on new found importance and urgency from those same NASA budget slashing politicos in Washington, DC, since the ongoing crisis in Ukraine this year exposed US vulnerability in a wide range of space endeavors affecting not just astronaut rides to the ISS but also the launch of the most critical US national security surveillance satellites essential to US defense.
US space vulnerability became obvious to everyone when Russia’s deputy prime minister, Dmitry Rogozin. who is in charge of space and defense industries, said that US sanctions could “boomerang” against the US space program and that perhaps NASA should “deliver their astronauts to the International Space Station using a trampoline.”
Rogozin also threatened to cut off exports of the Russian made RD-180 rocket engines which power the first stage of the United Launch Alliance (ULA) Atlas V rocket used to launch numerous US National Security spy satellites.
“Moscow is banning Washington from using Russian-made rocket engines, which the US has used to deliver its military satellites into orbit,” Rogozin said at a media briefing held on May 13.
NASA is also a hefty user of the Atlas V for many of the agency’s science and communication satellites like the Curiosity Mars rover, MAVEN Mars orbiter, MMS, Juno Jupiter orbiter and TDRS.
Musk and SpaceX have also filed lawsuits against the US Air Force to legally block the importation of the RD-180 engines by ULA for the Atlas V as a violation of the US economic sanctions.
So overall, US space policy is in a murky and uncertain situation and Musk clearly aims for SpaceX to be a central and significant player in a wide range of US space activities, both manned and unmanned.
The 3rd operational Dragon cargo resupply mission completed the 30 day SpaceX-3 flight to the ISS with a successful Pacific Ocean splashdown on May 18.
SpaceX will webcast the Dragon unveiling event LIVE on May 29 at 7 p.m. PST for anyone wishing to watch at www.spacex.com/webcast
Stay tuned here for Ken’s continuing SpaceX, Boeing, Sierra Nevada, Orbital Sciences, commercial space, Orion, Mars rover, MAVEN, MOM and more planetary and human spaceflight news.
Quelle: UT
.
Update: 29.05.2014 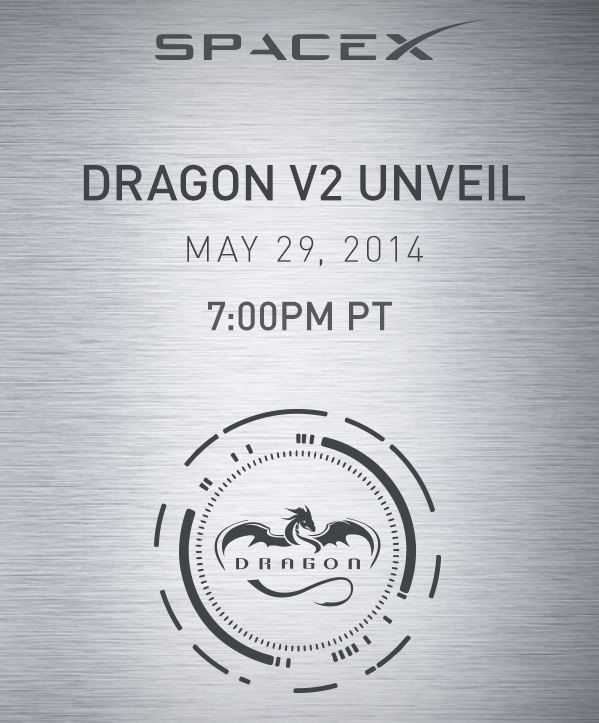 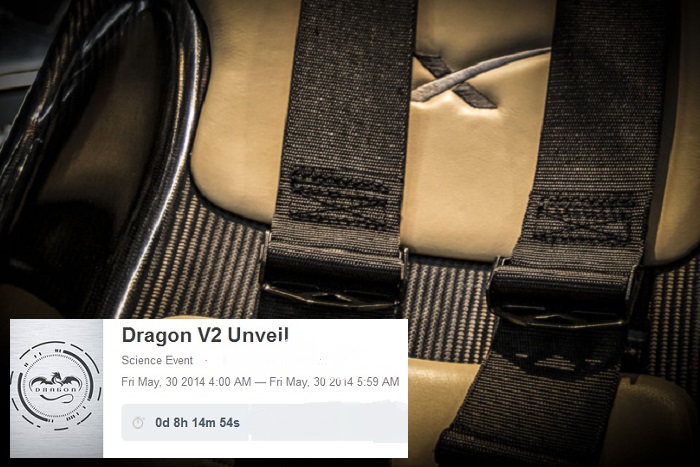 Next up, Dragon V2 – SpaceX’s next generation spacecraft designed to carry astronauts to space. 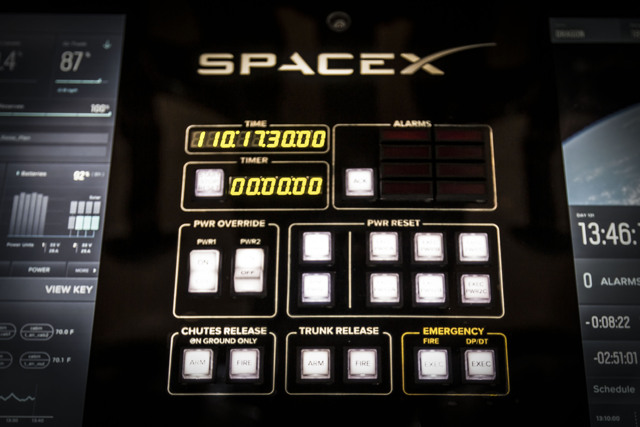 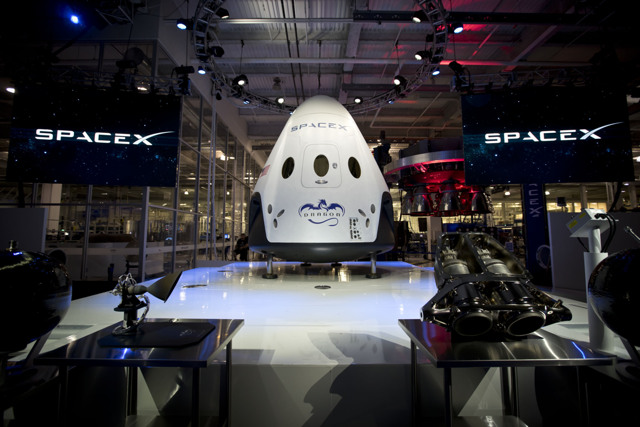 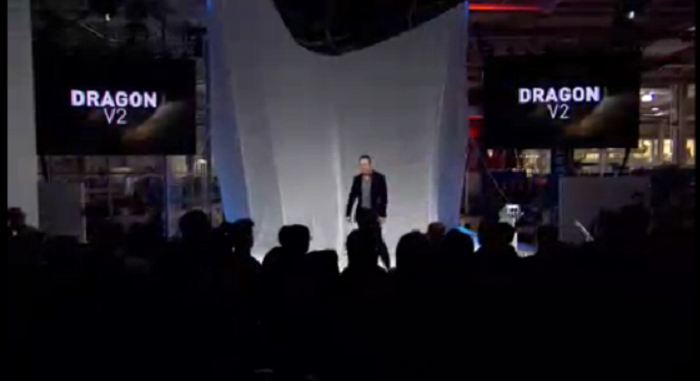 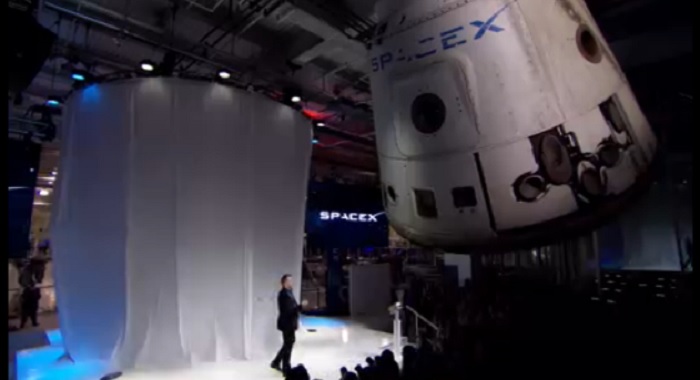 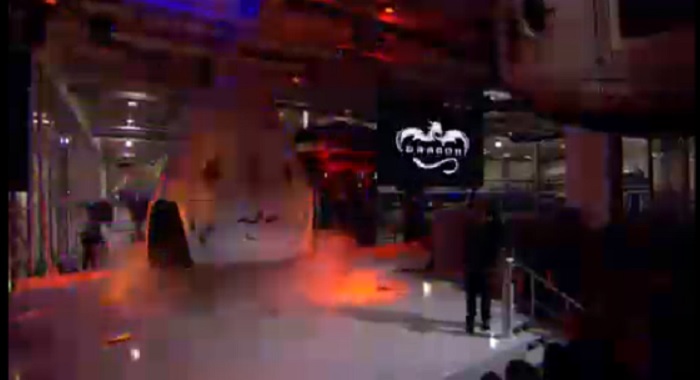 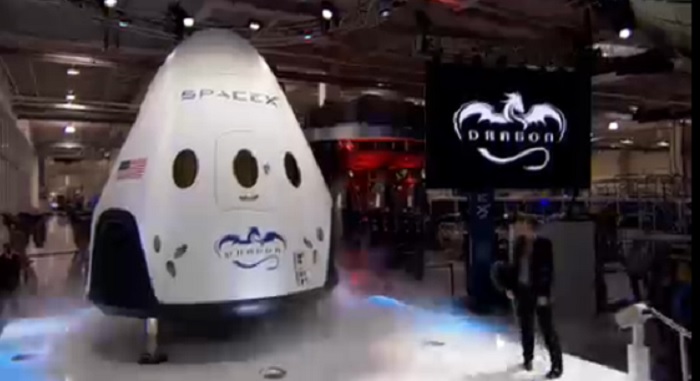 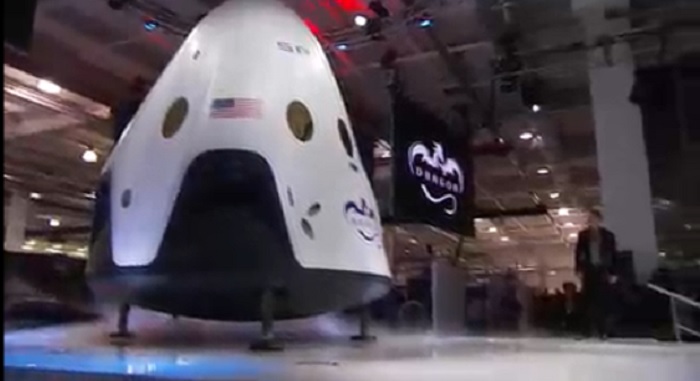 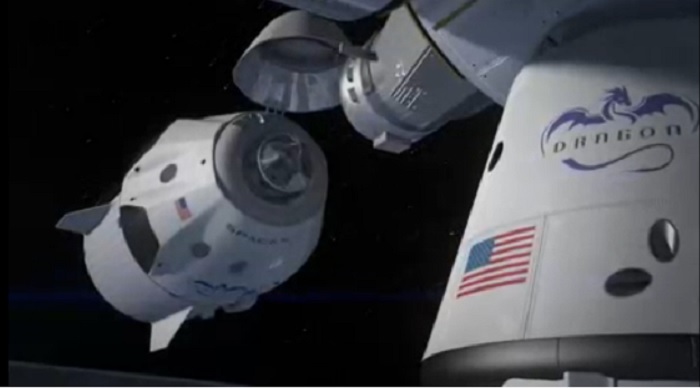 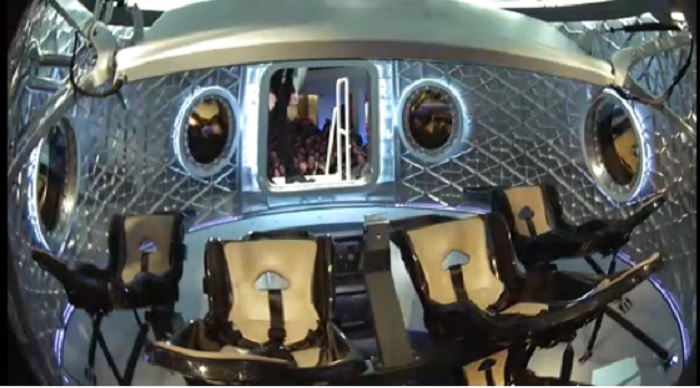 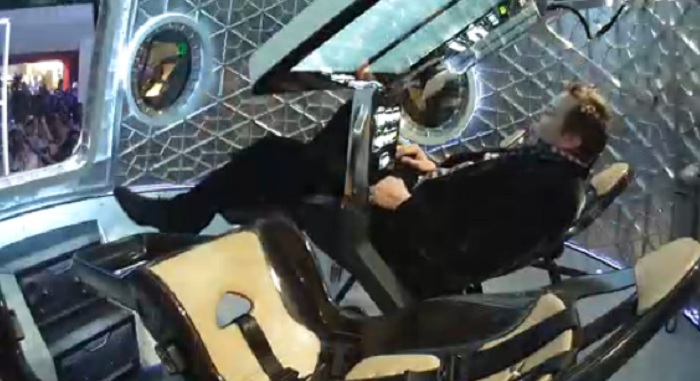 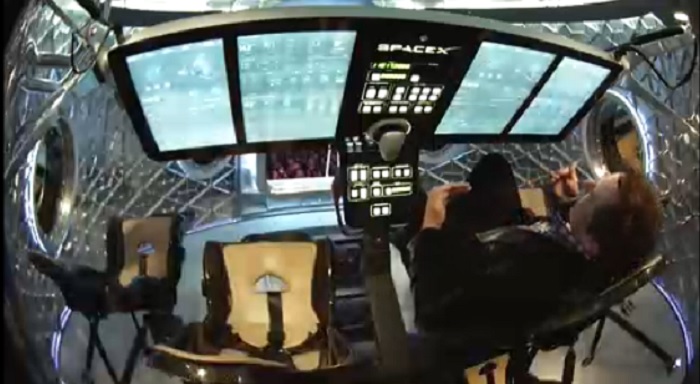 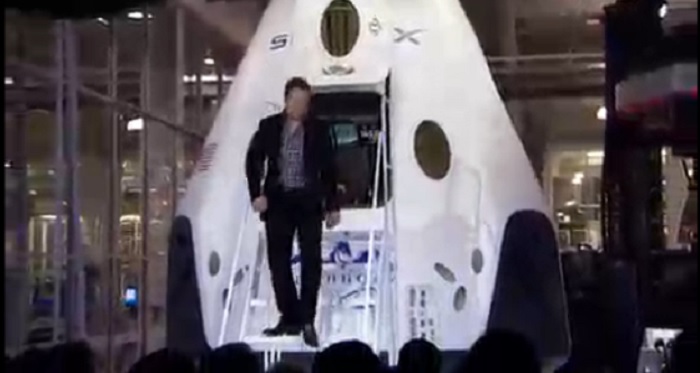 Elon Musk has taken the wraps off a new spacecraft designed to ferry up to seven astronauts to the International Space Station.

The unveiling of the cone-headed craft dubbed Dragon V2 took place at the southern California headquarters of Musk's company, SpaceX. Musk declared the spacecraft a big leap forward in technology.

SpaceX is one of several private companies competing to build "taxis" for Nasa to replace the retired space shuttle fleet. It previously flew four cargo missions to the space station, delivering food and supplies.

Nasa has been relying on Russian Soyuz rockets to carry astronauts to low-Earth orbit until a commercial spacecraft is ready to take over the task.

Since the shuttle fleet retired in 2011 Nasa has depended on Russian rockets to transport astronauts to orbit and back, paying nearly $71m per seat. The space agency has said it wants US companies to fill the void by 2017 and has given out seed money to spur innovation.

Companies competing for the right to ferry astronauts need to design a spacecraft that can seat four or more and be equipped with life support systems and an escape hatch in case of emergency. SpaceX has said it is designing a seven-seat spacecraft.

John Logsdon, professor emeritus of political science and international affairs at George Washington University, said SpaceX and longtime Nasa contractor Boeing were "more or less neck and neck" in the competition but progress overall was slower than anticipated, mainly because Congress had not fully funded Nasa's budget request for the effort. He said it was important for the US to move away from reliance on Russia for space travel given the political tension over the annexation of Crimea from Ukraine.

"It's essential to have our own capability to transport people to space," he said. "This is an important step in that direction."
.
Frams: 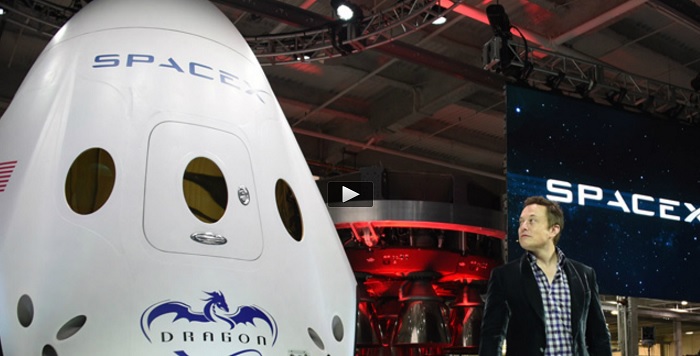 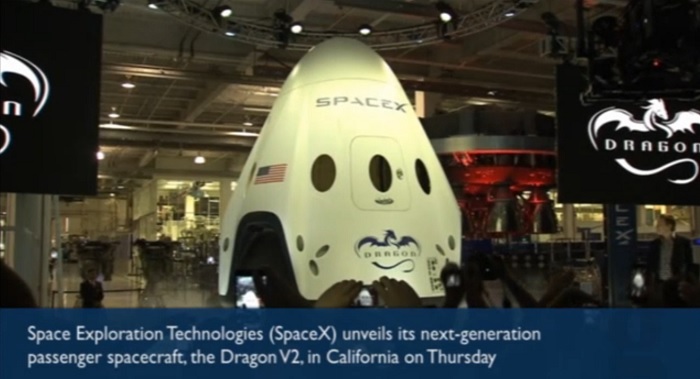 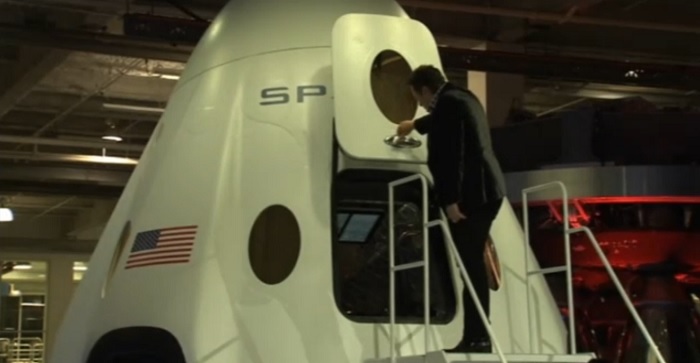 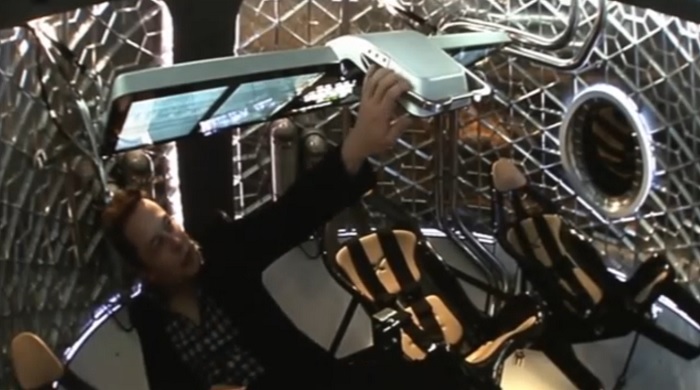 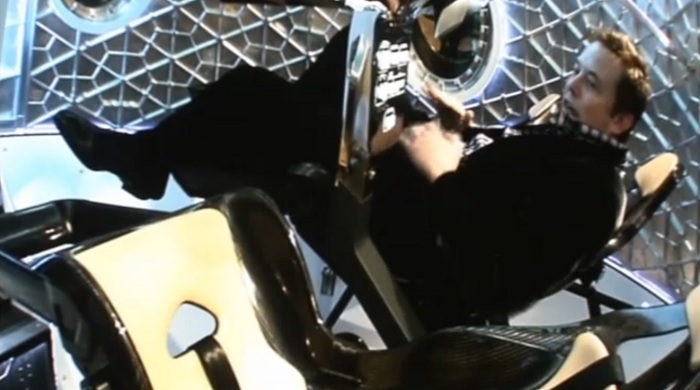 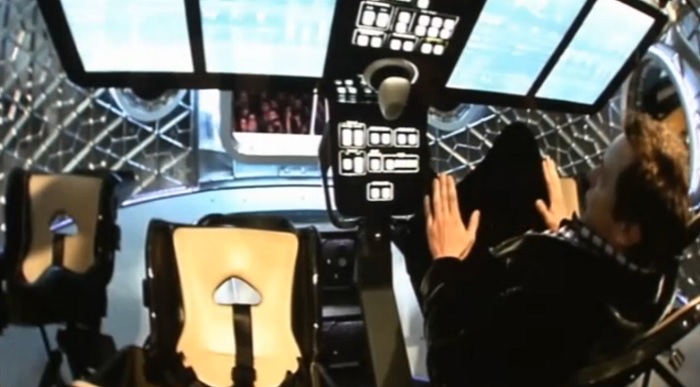 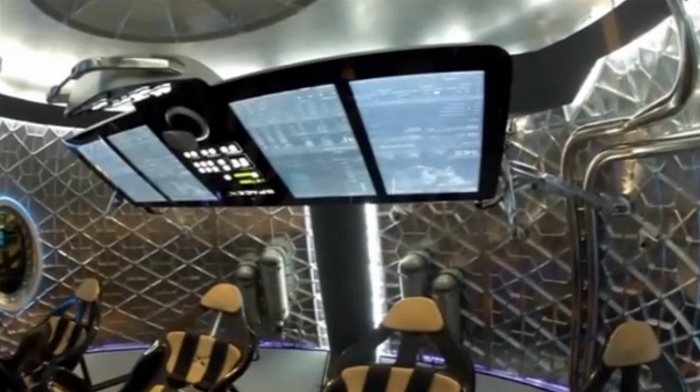 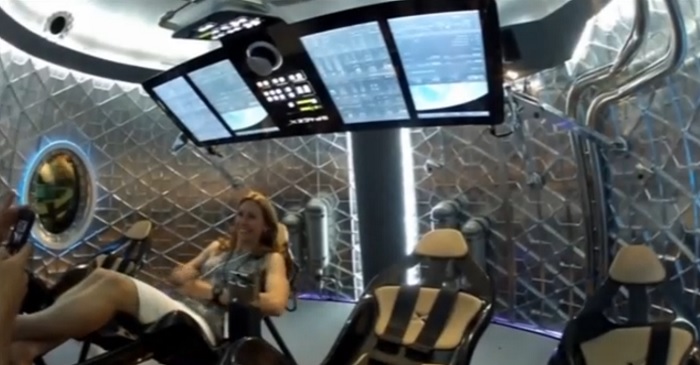 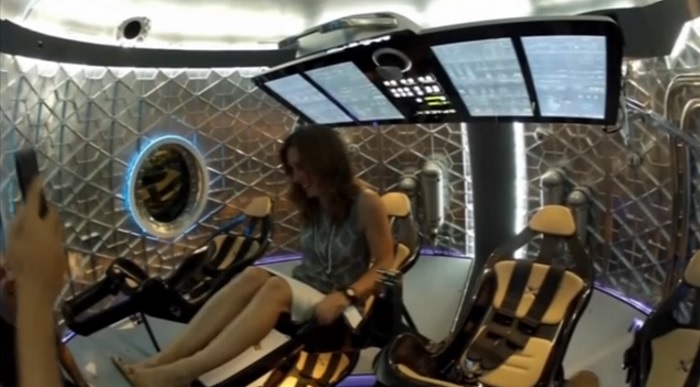