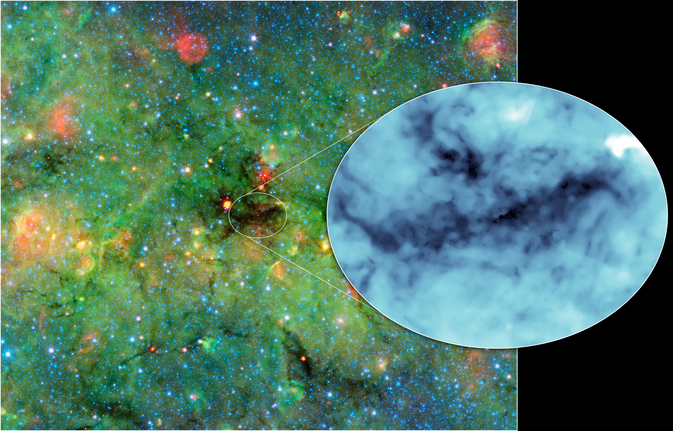 Astronomers have found cosmic clumps so dark, dense and dusty that they throw the deepest shadows ever recorded. The clumps were discovered within a huge cosmic cloud of gas and dust.

Astronomers have found cosmic clumps so dark, dense and dusty that they throw the deepest shadows ever recorded. Infrared observations from NASA's Spitzer Space Telescope of these blackest-of-black regions paradoxically light the way to understanding how the brightest stars form.
The clumps represent the darkest portions of a huge, cosmic cloud of gas and dust located about 16,000 light-years away. A new study takes advantage of the shadows cast by these clumps to measure the cloud's structure and mass.
The dusty cloud, results suggest, will likely evolve into one of the most massive young clusters of stars in our galaxy. The densest clumps will blossom into the cluster's biggest, most powerful stars, called O-type stars, the formation of which has long puzzled scientists. These hulking stars have major impacts on their local stellar environments while also helping to create the heavy elements needed for life.
"The map of the structure of the cloud and its dense cores we have made in this study reveals a lot of fine details about the massive star and star cluster formation process," said Michael Butler, a postdoctoral researcher at the University of Zurich in Switzerland and lead author of the study, published in The Astrophysical Journal Letters.
The state-of-the-art map has helped pin down the cloud's mass to the equivalent of 7,000 suns packed into an area spanning about 50 light-years in diameter. The map comes courtesy of Spitzer observing in infrared light, which can more easily penetrate gas and dust than short-wavelength visible light. The effect is similar to that behind the deep red color of sunsets on smoggy days -- longer-wavelength red light more readily reaches our eyes through the haze, which scatters and absorbs shorter-wavelength blue light. In this case, however, the densest pockets of star-forming material within the cloud are so thick with dust that they scatter and block not only visible light, but also almost all background infrared light.
Observing in infrared lets scientists peer into otherwise inscrutable cosmic clouds and catch the early phases of star and star cluster formation. Typically, Spitzer detects infrared light emitted by young stars still shrouded in their dusty cocoons. For the new study, astronomers instead gauged the amount of background infrared light obscured by the cloud, using these shadows to infer where material had lumped together within the cloud. These blobs of gas and dust will eventually collapse gravitationally to make hundreds of thousands of new stars.
Most stars in the universe, perhaps our sun included, are thought to have formed en masse in these sorts of environments. Clusters of low-mass stars are quite common and well-studied. But clusters giving birth to higher-mass stars, like the cluster described here, are scarce and distant, which makes them harder to examine.
"In this rare kind of cloud, Spitzer has provided us with an important picture of massive star cluster formation caught in its earliest, embryonic stages," said Jonathan Tan, an associate professor of astronomy at the University of Florida, Gainesville, and co-author of the study.
The new findings will also help reveal how O-type stars form. O-type stars shine a brilliant white-blue, possess at least 16 times the sun's mass and have surface temperatures above 54,000 degrees Fahrenheit (30,000 degrees Celsius). These giant stars have a tremendous influence on their local stellar neighborhoods. Their winds and intense radiation blow away material that might draw together to create other stars and planetary systems. O-type stars are short-lived and quickly explode as supernovas, releasing enormous amounts of energy and forging the heavy elements needed to form planets and living organisms.
Researchers are not sure how, in O-type stars, it is possible for material to accumulate on scales of tens to 100 times the mass of our sun without dissipating or breaking down into multiple, smaller stars.
"We still do not have a settled theory or explanation of how these massive stars form," said Tan. "Therefore, detailed measurements of the birth clouds of future massive stars, as we have recorded in this study, are important for guiding new theoretical understanding."
NASA's Jet Propulsion Laboratory, Pasadena, California, manages the Spitzer Space Telescope mission for NASA's Science Mission Directorate, Washington. Science operations are conducted at the Spitzer Science Center at the California Institute of Technology in Pasadena. Spacecraft operations are based at Lockheed Martin Space Systems Company, Littleton, Colorado. Data are archived at the Infrared Science Archive housed at the Infrared Processing and Analysis Center at Caltech. Caltech manages JPL for NASA.
Quelle: NASA
3008 Views
Created with page4