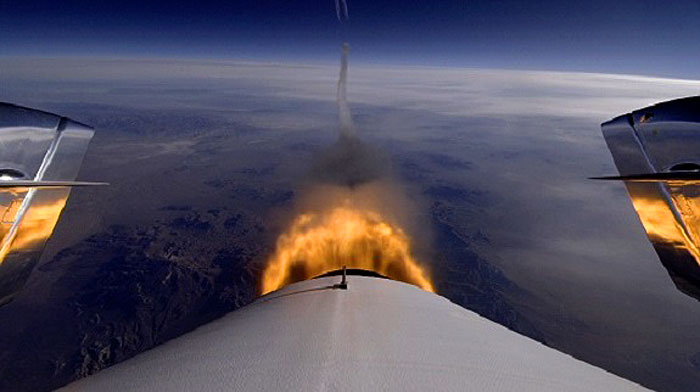 One of the more interesting revelations that came out of the London Sunday Times story I co-wrote on WhiteKnightTwo’s wing cracks was that Virgin Galactic finally acknowledged that SpaceShipTwo won’t be able to reach the internationally recognized boundary of space, which is 100 km (62 miles).
So, just how high can this first version of SpaceShipTwo go? Virgin now says the spacecraft will be able to exceed 50 miles. Other sources I know are far less confident it will be able to reach that high.
The reason is simple: the Sierra Nevada Corporation hybrid rubber-nitrous oxide engine they are using performs very poorly. The vibrations and oscillations in the version they used for the first three test flights would have torn the ship apart well if it had been fired for anywhere near full duration of about a minute.
So, remember how after the first powered flight in April 2013 when Virgin Group Founder Richard Branson declared that engineers had finally perfected the engine, and he promised to fly into space on Christmas Day dressed as Santa Claus? Utter bollocks. It had no relation to anything happening behind the scenes.
But, Virgin Galactic has a plan to fix it. Sources tell me engineers have modified SpaceShipTwo with additional tanks to hold helium that will be to dampen out the oscillations and vibrations. However, the additional weight will at least partially offset the extra engine performance. It also will reduce the number of passengers in the back from six to four, sources tell me.
Will the ship be able to reach 50 miles? In theory, yes. In practice…we’ll have to wait for flight testing to resume sometime later this year to find out.
In short, after nearly a decade of effort, Virgin Galactic has a ship that can’t even reach the same altitude as its predecessor, SpaceShipOne. This despite having advertised and sold tickets based upon a promised altitude of 100 km or more and about five minutes of weightlessness. (The actual contract with passengers says a minimum of 50 miles, but that wasn’t widely known, much less publicized.)
Further, the spaceship will carry one-third fewer passengers than originally planned. Or to put it another way, it will carry two more passengers than SpaceShipOne would have carried if it had ever been put into commercial service. Of course, SpaceShipTwo is much roomier than its predecessor, so passengers will be able to float around.
But, no matter. Virgin Galactic is pressing forward and still targeting the 100 km target at some point in the future. Meanwhile, the company expects customers to be happy with exceeding 50 miles, which in truth would still be a significant accomplishment.
Earlier this week, CEO George Whitesides said in the following statement to Gizmodo:
“NASA and the US Air Force have a long tradition of celebrating everything above 50 miles (~80km) as spaceflight, and we look forward to joining those ranks soon as we push onward and upward. We are still targeting 100km. As we have always noted, we will have to prove our numerical predictions via test flights as we continue through the latter phase of the test program. Like cars, planes, and every other type of vehicle designed by humans, we expect our vehicle design and performance to evolve and improve over time.
“When SpaceShipTwo reaches space for the first time—which we expect will happen just a few short months from now—it will become one a very small number of vehicles to have ever done so, enabling us to commence services as the world’s first commercial spaceline; our current timetable has Richard’s flight taking place around the end of the year.”
How thrilled customers will be with the change — which will likely mean less zero-g time — remains to be seen. Despite what their passenger contract says, Virgin Galactic had no trouble marketing the experience as something more than it will deliver.
This is rocket science, and it’s not surprising that something like this could happen. But, why did the customers have to find out about it from the newspaper? Astronaut relations should be more than just an endless stream of assurances that all is well and attacks on the media.
Quelle: Parabolic Arc
.
Update: 17.05.2014
.

To Space or Not to Space? Virgin Galactic Addresses the Question

Virgin Galactic's CEO says his company is aiming to take passengers beyond 62 miles (100 kilometers) in altitude, but they'll be counted as space travelers if they just rise above the 50-mile mark.

That 12-mile span highlights differences in definitions of the outer-space boundary, as well as questions about the initial capabilities of Virgin Galactic's SpaceShipTwo rocket plane. The spacecraft is expected to go through a series of flight tests over the coming months, setting the stage for commercial passenger operations.

Does going up a mere 50 miles count as spaceflight? That question was raised in a series of reports over the past week that took a close look at Virgin Galactic's policy.

According to the International Aeronautical Federation, a flight goes astronautical when it crosses the 100-kilometer line, also known as the Karman Line. That was also the definition of space used for the $10 million Ansari X Prize a decade ago, and Virgin Galactic has referred to the 100-kilometer definition numerous times since then.

However, the U.S. military has historically awarded astronaut wings to pilots who rose above 50 miles (80 kilometers) during the 1960s. NASA followed that definition for its X-15 test pilots — although three of those pilots didn't get their astronaut wings until 2005, 40 years after they flew. (One of them, Bill Dana, died last week at the age of 83.)

More than 700 customers have paid as much as $250,000 for the space experience — which would give them several minutes of weightlessness, a view of the curving Earth beneath the black sky of space, and a roller-coaster re-entry that involves as much as 6 G's of acceleration. That experience would be much the same at 50 miles as at 62 miles, though with somewhat less time spent in zero-G.

Whitesides said Virgin Galactic is targeting the 100-kilometer altitude and beyond, but added that "we have to prove that out in our test program."

"Just like everything else, we'll get better over time," he said. "We're trying to invent a new industry from scratch — we need to do that by stages, and we need to do it informed by safety."

The current plan calls for flying Virgin Galactic's billionaire founder, Richard Branson, on SpaceShipTwo as early as this year. However, Whitesides emphasized that schedule was dependent on the outcome of the flight test program. (Virgin Galactic's development schedules have been consistently overoptimistic: In 2004, Branson was talking about beginning space tourism flights in 2007.)

Whitesides said flight operations may undergo refinements during the early commercial flights. "It'd be unreasonable to think we're going to launch this like a pristine jewel," he told NBC News.

SpaceShipTwo's most recent powered flight test took place in January and rose to a height of 71,000 feet (13.4 miles, or 21.6 kilometers). Since then, Virgin Galactic has been putting the rocket plane's WhiteKnightTwo mothership through rounds of inspections, repairs and upgrades — including the installation of a beefed-up landing gear.

Whitesides said the landing gear was "working well" during an 80-knot (92-mph) runway taxi test at the Mojave Air and Space Port on Thursday. WhiteKnightTwo should resume flights in "a couple of weeks," with SpaceShipTwo tests to follow, he said.

NBCUniversal has established a multi-platform partnership with Virgin Galactic to track the development of SpaceShipTwo and televise its inaugural commercial spaceflight.