Scientists have discovered new evidence to suggest that lightning on Earth is triggered not only by cosmic rays from space, but also by energetic particles from the Sun 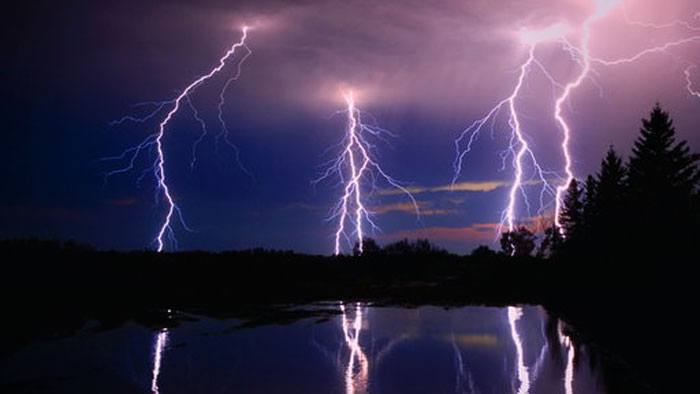 University of Reading researchers found a link between increased thunderstorm activity on Earth and streams of high-energy particles accelerated by the solar wind, offering compelling evidence that particles from space help trigger lightning bolts.
Publishing their study today, 15 May 2014, in IOP Publishing’s journal Environmental Research Letters, researchers from Reading’s Department of Meteorology found a substantial and significant increase in lightning rates across Europe for up to 40 days after the arrival of high-speed solar winds, which can travel at more than a million miles per hour, into the Earth’s atmosphere.
Although the exact mechanism that causes these changes remains unknown, the researchers propose that the electrical properties of the air are somehow altered as the incoming charged particles from the solar wind collide with the atmosphere.
The results could prove useful for weather forecasters, since these solar wind streams rotate with the Sun, sweeping past the Earth at regular intervals, accelerating particles into Earth’s atmosphere. As these streams can be tracked by spacecraft, this offers the potential for predicting the severity of hazardous weather events many weeks in advance.
Lead author of the study, Dr Chris Scott, said: “Our main result is that we have found evidence that high-speed solar wind streams can increase lightning rates. This may be an actual increase in lightning or an increase in the magnitude of lightning, lifting it above the detection threshold of measurement instruments.
. 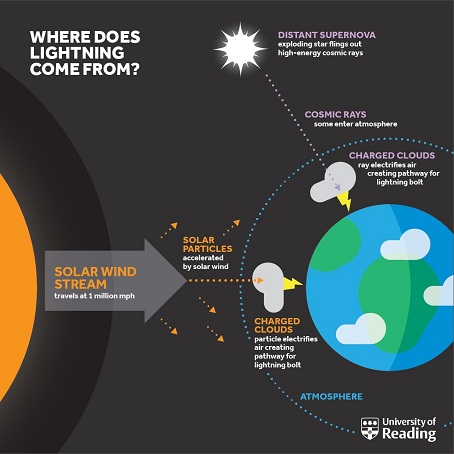 “Cosmic rays, tiny particles from across the Universe accelerated to close to the speed of light by exploding stars, have been thought to play a part in thundery weather down on Earth, but our work provides new evidence that similar, if lower energy, particles created by our own Sun also affect lightning.
“As the Sun rotates every 27 days these high-speed streams of particles wash past our planet with predictable regularity. Such information could prove useful when producing long-range weather forecasts.”
Professor Giles Harrison, head of Reading’s Department of Meteorology and co-author of the ERL article, said: “In increasing our understanding of weather on Earth we are learning more about its important links with space weather. Bringing the topics of Earth Weather and Space Weather ever closer requires more collaborations between atmospheric and space scientists, in which the University of Reading is already leading the way.”
To arrive at their results, the researchers analysed data on the strikes of lightning over the UK between 2000 and 2005, which was obtained from the UK Met Office’s lightning detection system. They restricted their data to any event that occurred within a radius of 500 km from central England.
The record of lightning strikes was compared with data from Nasa’s Advanced Composition Explorer (ACE) spacecraft, which lies between the Sun and the Earth and measures the characteristics of solar winds.
After the arrival of a solar wind at the Earth, the researchers showed there was an average of 422 lightning strikes across the UK in the following 40 days, compared to an average of 321 lightning strikes in the 40 days prior the arrival of the solar wind. The rate of lightning strikes peaked between 12 and 18 days after the arrival of the solar wind.
The solar wind consists of a constant stream of energetic particles—mainly electrons and protons—that are propelled from the Sun’s atmosphere at around a million miles per hour. The streams of particles can vary in density, temperature and speed and sweep past Earth every 27 days or so, in line with the time it takes the Sun to make one complete rotation relative to the Earth.
The Earth’s magnetic field provides a sturdy defence against the solar wind, deflecting the energetic particles around the planet; however, if a fast solar stream catches up with a slow solar stream, it generates an enhancement in both the material and the associated magnetic field.
In these instances, the energetic particles can have sufficient energies to penetrate down into the cloud-forming regions of the Earth’s atmosphere and subsequently affect the weather that we experience.
“We propose that these particles, while not having sufficient energies to reach the ground and be detected there, nevertheless electrify the atmosphere as they collide with it, altering the electrical properties of the air and thus influencing the rate or intensity at which lightning occurs,” said Dr Scott.
The increase in the rate of lightning after the arrival of solar winds was corroborated by a significant increase in the days in which thunder was heard, which were recorded at UK Met Office stations around the UK.
Quelle: IOP
« Zum vorherigen Eintrag Zum nächsten Eintrag »
3462 Views
Created with page4