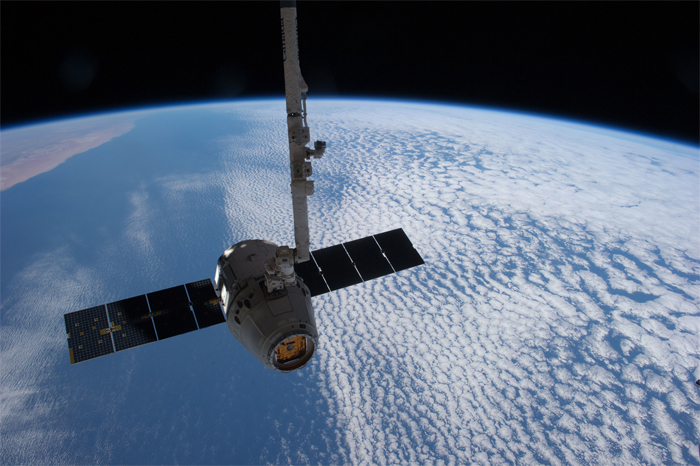 SpaceX Dragon Spacecraft with NASA Cargo Set for Return to Earth
.
NASA Television will provide live coverage of the departure of the SpaceX Dragon spacecraft from the International Space Station beginning at 9 a.m. EDT on Sunday, May 18. After leaving the space station, the capsule will splashdown in the Pacific Ocean carrying more than 3,500 pounds of NASA science samples and cargo.
Dragon is set to be detached from the Earth-facing side of the station's Harmony module and unberthed through commands sent by robotic ground controllers at mission control in Houston operating the Canadarm 2 robotic arm. Dragon then will be maneuvered into place for its release scheduled for approximately 9:25 a.m.
Dragon will execute three thruster firings to move away from the station to a safe distance for its deorbit burn at 2:10 p.m. Dragon will splash down around 3:05 p.m. in the Pacific Ocean west of Baja California. Neither the deorbit burn nor the splashdown will be broadcast on NASA TV.
Dragon is the only space station resupply spacecraft designed to return to Earth intact. Among the 3,563 pounds of return cargo are science samples from human research, biology and biotechnology studies, physical science investigations and education activities. The spacecraft also will return crew supplies, vehicle hardware and spacewalk equipment.
Dragon was launched on a SpaceX Falcon 9 rocket from Cape Canaveral Air Force Station in Florida on April 18 on the company’s third contracted commercial resupply mission to the station. Dragon arrived to the space station on April 20 with approximately 5,000 pounds of supplies aboard.
Quelle: NASA
« Zum vorherigen Eintrag Zum nächsten Eintrag »
3597 Views
Created with page4