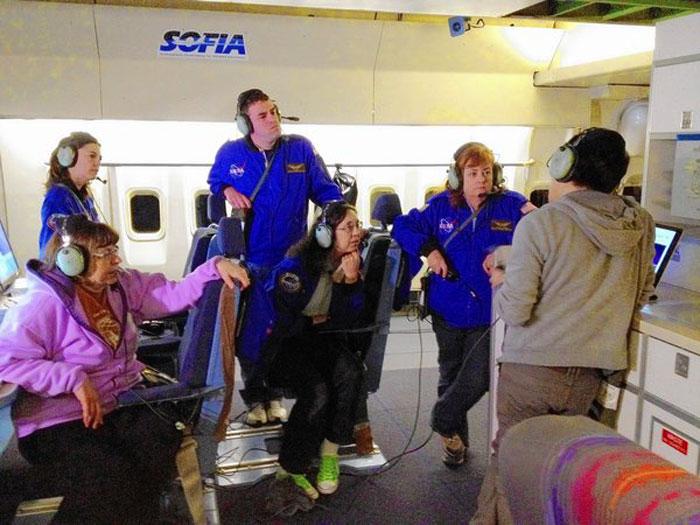 Educators Vivian Hoette, from left, Heidi Steinbrink, Tom Jenkins, Lynne Zielinski and Marcella Linahan fly on the SOFIA airborne observatory as scientist Ryan Lau explains the infrared astronomical research he’s conducting on board. (SETI Institute.Photo / May 6, 2014)
.
Cruising in a Boeing 747 at 43,000 feet, teacher Lynne Zielinski marveled at the green glow of the aurora borealis and the curvature of the Earth from the stratosphere.
As an educator at Yerkes Observatory near Lake Geneva, Wis., Zielinski was already plotting how to bring her experiences back to ground level to share with her students.
Zielinski, who taught at Glenbrook North High School in Northbrook until her recent retirement, and Marcella Linahan, a science teacher at Carmel Catholic High School in Mundelein, were passengers and participants this week on two flights of SOFIA, the Stratospheric Observatory for Infrared Astronomy, a NASA jet equipped with an infrared telescope.
The aircraft flies at high altitude to avoid interference from water vapor in the atmosphere and to see certain infrared wavelengths that no ground-based telescope can see, NASA says.
A door opens on the side of the plane during flight, so a telescope can research how stars are formed and how the black hole at the center of the Milky Way influences our galaxy. The passengers are walled off from the telescope to keep the cabin warm and pressurized during flight.
NASA has selected 54 teachers nationwide to join the periodic flights since the space agency began offering them in 2010.
The educators get to meet researchers on board and interview them about the work they're doing and how they got to their current positions. The teachers will share that information online and at schools, with the goal of encouraging students to take up science, technology and math.
Connecting students to real scientists at work can open the youths' minds to future job possibilities and to what it takes to get those jobs, said Vivian Hoette, director of education at Yerkes Observatory in Williams Bay, Wis. She also was on the SOFIA flights.
"Kids always ask, 'Why do I have to learn this?'" she said. "When a teacher can say, 'I met a person who has a job in this cool observatory on an airplane, and this is how they got their job,' it gives it real substance."
.

NASA's Stratospheric Observatory for Infrared Astronomy (SOFIA) is a converted Boeing 747SP jetliner, which flies astronomers and teachers 45,000 above the water vapor of the Earth's atmosphere. (Handout, NASA photo / January 27, 2014)
.
Yerkes Observatory, operated by the University of Chicago, also offers classes for visually and hearing-impaired students. SOFIA participants will create tactile graphics of infrared images from the flight, helping visually impaired students compare the properties of massive stars at the center of the galaxy.
After presenting her findings before an international symposium of students, Zielinski will also share her experiences with the public this summer during special events at Yerkes. She said she has numerous former students who work in astronomy, physics and aerospace.
The other local teacher on board, Linahan, said the 10-hour flights were a lesson in how real science works.
On each outing, scientists take turns getting precious time to focus on a particular spot in the cosmos. One astronomer tracked an object for two hours, but found nothing he was looking for.
"It was an eye-opening moment," she said. "They have to go back to the drawing board and revise their hypothesis."
Despite its unique mission, SOFIA may not survive. The White House has proposed grounding the plane and putting it into storage this fall to slash its $85 million budget, unless the agency can find other partners to help operate the program. A bill in the U.S. House of Representatives would keep the observatory flying for $70 million.
.
Quelle: Chicago Tribune
.

Michael Maccarone of Sunset Park, who teaches at the private Avenues: The World School in Manhattan, has been selected to do science research onboard the space agency’s Stratospheric Observatory for Infrared Astronomy or SOFIA — a retrofitted Boeing aircraft that can fly up to 45,000 feet in the air 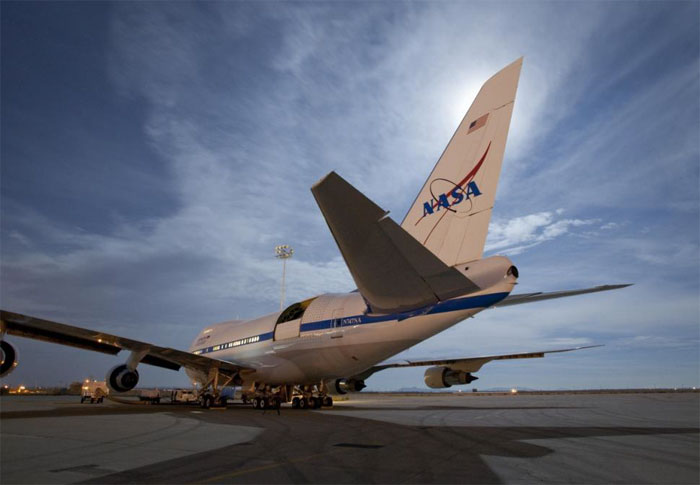 NASA's Stratospheric Observatory for Infrared Astronomy is a retrofitted Boeing aircraft equipped with an 8.2-foot in diameter telescope.
.
A Sunset Park physics teacher will boldly go where few Brooklynites have gone before.
Michael Maccarone, an upper-level teacher at the private Avenues: The World School in Manhattan, has been selected to do science research onboard NASA’s airborne observatory.
“As a science teacher, it’s incredibly interesting and fascinating to do anything with NASA. It’s a privilege and an honor,” said Maccarone, 30, who developed the science curriculum at the Avenues school and other institutions.The Sunset Park resident will join engineers and scientists onboard the space agency’s Stratospheric Observatory for Infrared Astronomy or SOFIA — a retrofitted Boeing aircraft that can fly up to 45,000 feet in the air, which is a few thousand feet higher than typical commercial airliners fly.Maccarone and his colleague Elizabeth Rosenberger of Manhattan were the only two New York residents chosen out of 24 teachers nationwide to participate in the research program, which allows educators to shoot for the stars.
CARLA THOMAS/NASAThe cockpit of the NASA's airborne observatory.“Our job is really to observe and report,” said Maccarone, adding that he had to complete a 12-week graduate-level astronomy course to partake in the program. “We’re always trying to find ways to connect our students to real science and there’s no better way than to say ‘here’s the data we collected while we were on flight.’”
. 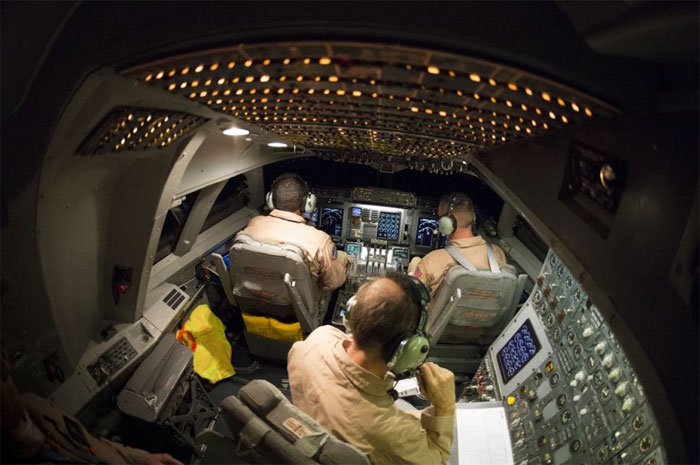 The cockpit of the NASA's airborne observatory.
.
After training at the Ames Research Center in California starting Monday, Maccarone will take two 10- to 12-hour flights onboard the jumbo jet — which is equipped with an 8.2-foot-in-diameter telescope — once it launches on May 15 and May 16 from Ames.
NASA
. 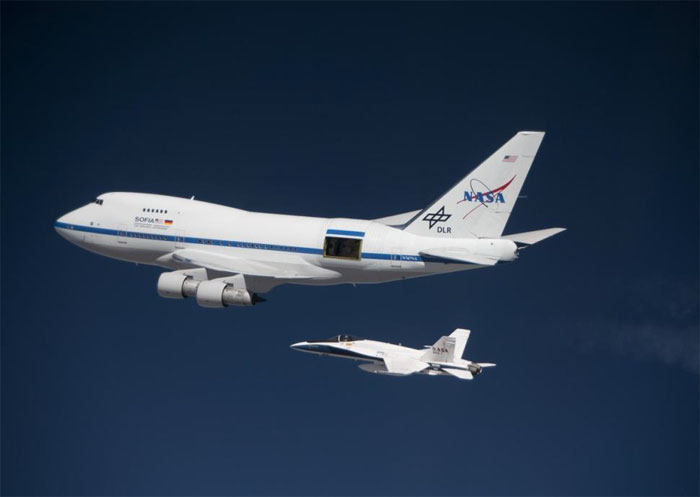 NASA's SOFIA can fly at an altitude of up to 45,000 feet.
.
Maccarone will have in-depth conversations with scientists onboard the flight about what they are looking for.
“They’re looking for new observations about the planets in our solar system and what we can learn through the infrared spectrum that we haven’t been able to see visibly with our land telescopes,” he said.
Maccarone plans on developing iBooks for kindergarten through high school students relating to his findings.
“We will use the experience to tell a bunch of different stories about many different levels of science from astronomy to the electromagnetic spectrum to parts of the atmosphere and everything in between,” he said.
Quelle: NY Daily News
« Zum vorherigen Eintrag Zum nächsten Eintrag »
3792 Views
Created with page4