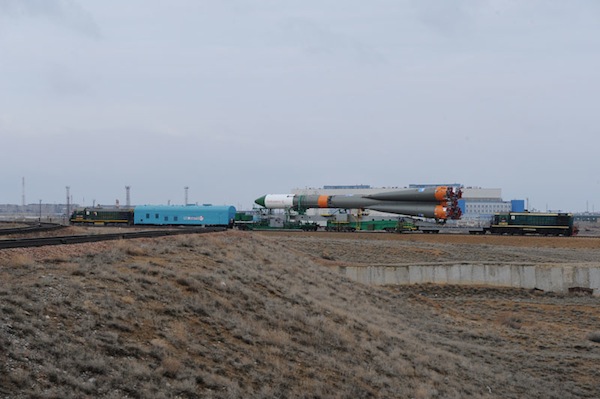 Russia is poised to deliver fresh supplies to the International Space Station on Wednesday with the launch and docking of an automated Progress cargo spacecraft.
The Progress M-23M spacecraft is set for liftoff aboard a Soyuz rocket at 1526 GMT (11:26 a.m. EDT) Wednesday from the Baikonur Cosmodrome in Kazakhstan.
It will mark the 55th Russian Progress resupply spacecraft to launch to the space station since cargo deliveries began in 2000.
Mounted on top of a three-stage Soyuz booster, the Progress spaceship is packed with more than 1,700 pounds of propellant, 926 pounds of water, 48 pounds of oxygen and more than 3,100 pounds of dry cargo comprised of spare parts, scientific experiments, food and other items for the space station's six-man crew.
The Soyuz rocket emerged from its assembly building at the Baikonur Cosmodrome before sunrise Monday on a specially-built railroad car. The rocket arrived at the launch pad by mid-morning before a hydraulic erector system lifted the unfueled rocket before work platforms were raised to encapsulate the rocket for final launch preparations.
The images below show the Soyuz rocket's rollout Monday.
Liquid oxygen and kerosene propellants will be pumped into the rocket in the final hours before liftoff, which is set for 9:26 p.m. local time Wednesday.
The rocket's four strap-on boosters will shut down and fall away from the Soyuz about two minutes after liftoff. The launcher's liquid-fueled core stage and upper stage will boost the Progress M-23M spacecraft into orbit about nine minutes into the flight.
The Progress is programmed to extend its solar arrays to begin charging the craft's batteries moments after deploying from the Soyuz rocket's upper stage. The spacecraft will also open navigation and communications antennas shortly after the launch.
After a series of engine burns to fine-tune its approach to the space station, the Progress begin its automated rendezvous sequence at 1914 GMT (3:14 p.m. EDT). The radar-guided rendezvous will culminate with a flyaround maneuver to line up with the station's Pirs docking compartment. Docking is set for 2120 GMT (5:20 p.m. EDT), less than six hours after liftoff.
The Progress M-22M spacecraft undocked from the space station Monday to clear the way for the arrival of the new unmanned supply ship. Loaded with trash, the older Progress is set for a series of experiments to help Russian engineers determine how they can better track rocket exhaust plumes from the ground.
The Progress M-22M spacecraft is set for a de-orbit burn and destructive re-entry over the Pacific Ocean on April 18.
. 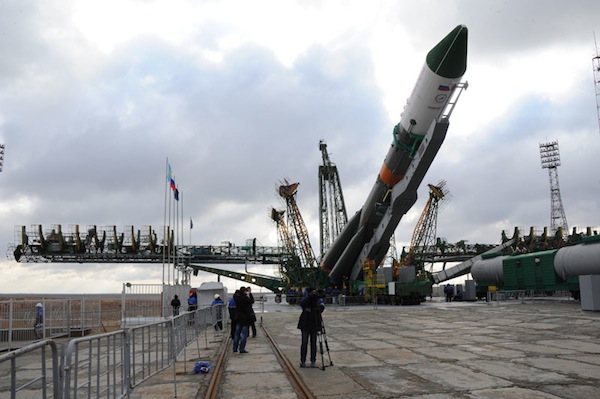 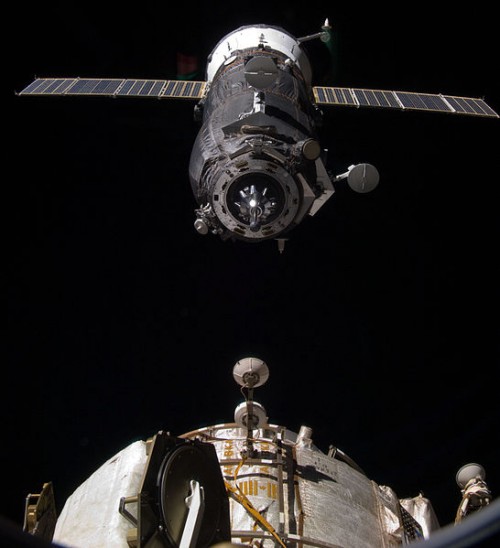 The Russian resupply spacecraft Progress M-23M is to be launched to the International Space Station (ISS) from Baikonur spaceport's Site 1 (Gagarin's one) on Wednesday, an official of Roscosmos (Federal Space Agency) told Itar-Tass.
"The liftoff of the carrier rocket Soyuz-U with payload transport spacecraft Progress M-23M is scheduled for 19:25, Moscow time," a Roscosmos press service official said.
According to the press service, "the spacecraft is to deliver more than 25 tonnes of supplies of various purpose to the ISS: fueld to sustain the ISS orbit; equipment to fit the Station up; food, water, air for cosmonauts, as well as pallets with research equipment for the conduct of experiments".
The spacecraft is to dock with the ISS six hours after liftoff.
The process of the six-hour flight (during which the spacecraft makes four revolutions around the EarthNote by Itar-Tass) was fitst tried out in August 2012 by means of the Progresd M-16M spacecraft. Until that time all resupply spacecraft of this series had traveled to the ISS according to a 48-hour diagram.
Currently working in orbit are Russian cosmonauts Mikhail Tyurin, Alexander Skvortsov, Oleg Artemyev, American astronauts Richard Mastracchio and Steve Swanson, as well as Japanese astronaut Koichi Wakata.
Quelle: The Voice of Russia
.
Update:
.
Erfolgreicher Start von Progress (55) M-23M  / Progress begins six-hour journey to space station

The Progress will begin its automated rendezvous sequence at 1914 GMT (3:14 p.m. EDT). The radar-guided rendezvous will culminate with a flyaround maneuver to line up with the station's Pirs docking compartment. 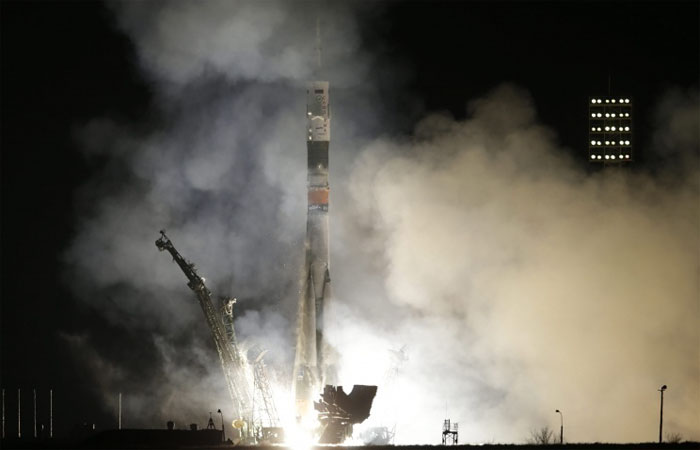 BAIKONUR, April 09. /ITAR-TASS/. The transport ship Progress M-23M has separated from the Soyuz-U carrier rocket and continues flying to the International Space Station (ISS), officials at the Baikonur spaceport told ITAR-TASS ion Wednesday, April 9.
The transport ship is to dock with the ISS in six hours after the liftoff. It is carrying more than 2.5 tonnes of supplies. Working aboard the ISS are Mikhail Tyurin, Alexander Skvortsov and Oleg Artemyev of Russia, Richard Mastracchio and Steven Swanson of NASA, and Japanese astronaut Koichi Wakata. 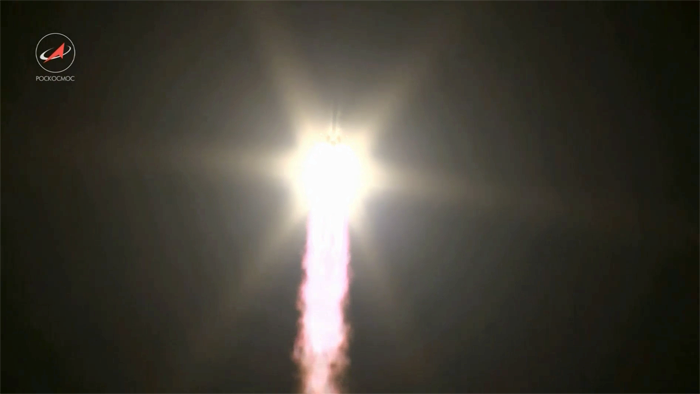 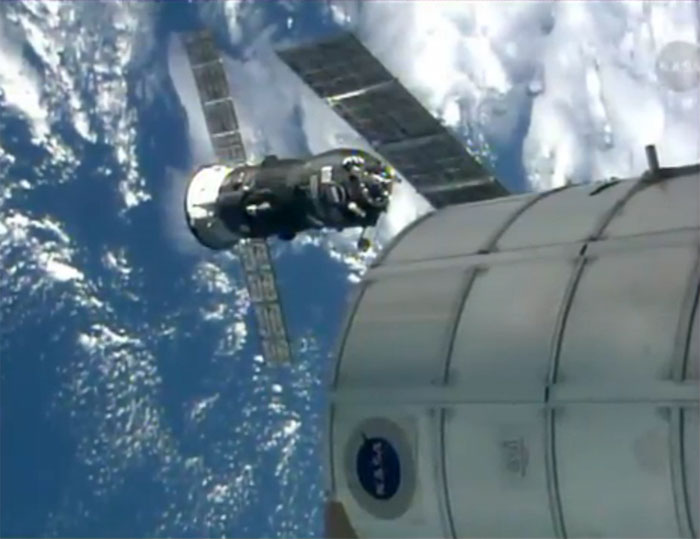 The unmanned Russian Progress 55 cargo ship is seen near the International Space Station just before the two spacecraft docked on April 9, 2014. The Progress 55 spacecraft launched into orbit earlier on April 9 from Baikonur Cosmodrome, Kazakhstan, carrying 3 tons of supplies.
.
A Russian cargo ship linked up with the International Space Station today (April 9) to deliver tons of vital supplies during a swift, six-hour trip to the orbiting outpost.
The unmanned Progress 55 spacecraft linked up with the space station at 5:14 p.m. EDT (2114 GMT) nearly six hours after launching into orbit atop a Soyuz rocket from the Baikonur Cosmodrome in the Central Asian nation of Kazakhstan at 11:26 a.m. EDT (1526 GMT). It was 9:26 p.m. local time in Baikonur at the time of the launch.
The Progress 55 spacecraft performed flawlessly during the docking during its "silky smooth six-hour adventure," NASA spokesman Rob Navias said during live NASA TV commentary.