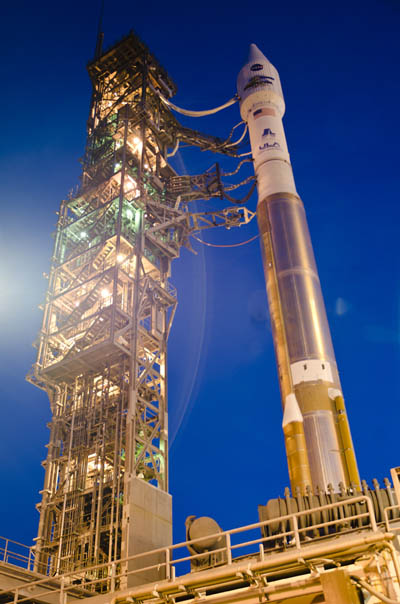 A blast from the past Military weather satellite finally set to launch
.
A $518 million military weather satellite that has been waiting 15 years to shine will be launched into orbit Thursday atop an Atlas 5 rocket from the western spaceport in California.
Liftoff of the Defense Meteorological Satellite Program Flight 19 spacecraft is planned for 7:46 a.m. local time (10:46 a.m. EDT; 1446 GMT) at the opening of a 10-minute launch window at Vandenberg Air Force Base.
Outfitted with a suite of seven sensors, DMSP provides the military with visible and infrared cloud pictures, measures precipitation, surface temperatures and soil moisture, and collects space weather data.
But as past satellites were flown and ended up exceeding their design lives in orbit, the launch date for Flight 19 slipped -- and slipped.
Until now, when the Lockheed Martin-built satellite is finally needed in space.
"The program was supposed to have flown out years ago. Success, though, believe it or not, was the cause of the delay. This last block of satellites have lasted significantly longer than anyone projected. So when this satellite was originally built the plan was for it to be launched shortly after it was finished," said Lt. Col. James Bodnar, 4th Space Launch Squadron commander at Vandenberg.
Bodnar tells the story:
"This satellite was built in the mid 90s. There's components that were made as early as 1993. It was turned over to the Air Force as finished in 1998 and put into long-term storage for 10 years.
"The satellite itself was originally built in (East Windsor,) New Jersey. When it was finished it was shipped to California and put into storage in Sunnyvale. In 2008, it was brought out of storage."
Along the way it underwent two lifetime extension efforts to boost the in-space life expectancy, upgraded with star trackers and a digital gyroscope for navigation and replacement of materials and lubricants that had degraded over time. And there has been testing -- lots of testing -- on Flight 19.
"We have had to go through and make sure the satellite and sensors all work as they were intended. We did go through a testing regime to make sure the results that we got several years ago when the satellite was delivered to the Air Force still worked," said Col. Scott Larrimore, the Air Force weather program director.
"It was shipped to Vandenberg on Aug. 1, 2013 by C-17 aircraft and went to our historic payload processing facility that was built around processing DMSP satellites, Building 1559," Bodnar said.
Final sensor installations, more testing and encapsulation of the 2,700-pound satellite occurred at Vandenberg before the craft took a 6-mile, 8-hour journey to the launch pad on March 19. There, it was hoisted into the gantry and mated to its booster rocket at long last.
"I've been in this business a while and this is a rare and blessed problem to have in that the satellites (in space) have continued capabilities significantly longer than originally designed, saving the government large amounts of money and time in the form of development follow-on blocks of satellites," Bodnar said.
"I think we need to highlight the reason behind that and that's been the fantastic longevity of each of the satellites that have been launched over the precious years."
One satellite, for instance, was launched in 1995 and remains alive today. Flight 19 will be 7th satellite in the operating DMSP constellation.
"The satellite we are launching could provide weather data as late as 2020," Bodnar said.
DMSP 19 is the fifth satellite of its particular breed to launch and is part of Lockheed Martin's legacy that has produced nearly 50 satellites throughout the program's 52-year history.
"The DMSP program is the longest running satellite production program in the world. There's been no other satellite program that has lasted as long as the DMSP program," Bodnar said.
"We look forward to another successful launch in extending this mission into the next decade," Larrimore said.
Quelle: SN
. 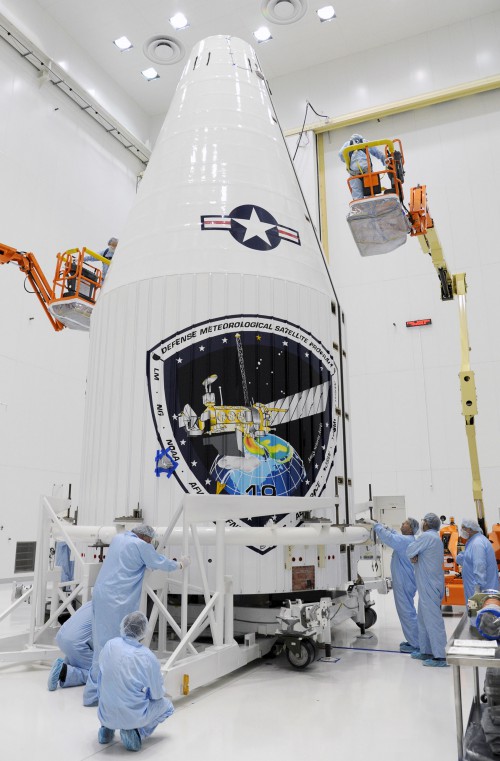 An Atlas 5 rocket and its military weather satellite were declared ready for liftoff following final reviews this week at Vandenberg Air Force Base.
Blastoff is planned for 7:46 a.m. today from Space Launch Complex-3 on South Base. The team has 10 minutes each day for the rocket to launch or the mission will have to be postponed so the spacecraft can be placed where its needs to be in space.
Weather is expected to accommodate today’s launch attempt with just a 10 percent likelihood conditions will force a delay. The concern centers on thick clouds.
Conditions reportedly worsen if the launch is postponed until Friday, with a 60 percent possibility that cloud conditions would prevent liftoff.
The United Launch Alliance rocket will carry the 19th craft for the Defense Meteorological Satellite Program, or DMSP, for a mission estimated to cost $518 million.
The craft operate as a two-satellite constellation to provide weather data used to forecast regional and global patterns. Additionally, the craft collects space weather information.
“For more than five decades, DMSP has been providing reliable, timely and dependable environmental information essential to the warfighter. DMSP-19 will extend this proud tradition well into the next decade,” said Col.
Scott Larrimore, director of the Space and Missile Systems Center’s Defense Weather Systems Directorate. “Through the continued dedication, detailed preparation and hard work of our combined government-contractor team, DMSP-19 is ready to launch.”
Due to the planned launch, Jalama Beach, Miguelito Park, and Ocean Beach Park will be closed. Campers and visitors at the beaches will be cleared from the sites between 6 and 9 a.m., county officials said.
Additionally, access to Surf Beach is expected to be blocked off due to the proximity to the launch facility.
The Atlas 5 launch site is visible from several spots around the Lompoc area, including the peak of Harris Grade Road, the southwestern edge of Vandenberg Village and Ocean Avenue west of Lompoc.
Among those expected to gather at the base for the launch are nearly 80 eighth-grade students from Tommie Kunst Junior High School in Santa Maria.
The students take math classes taught by Laurie John.
On Wednesday, the students received a pre-launch briefing from personnel from the Joint Functional Component Command for Space at Vandenberg.
. 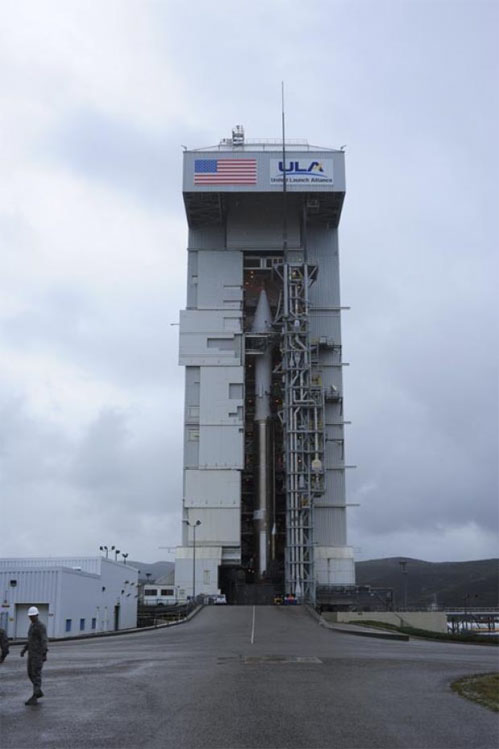 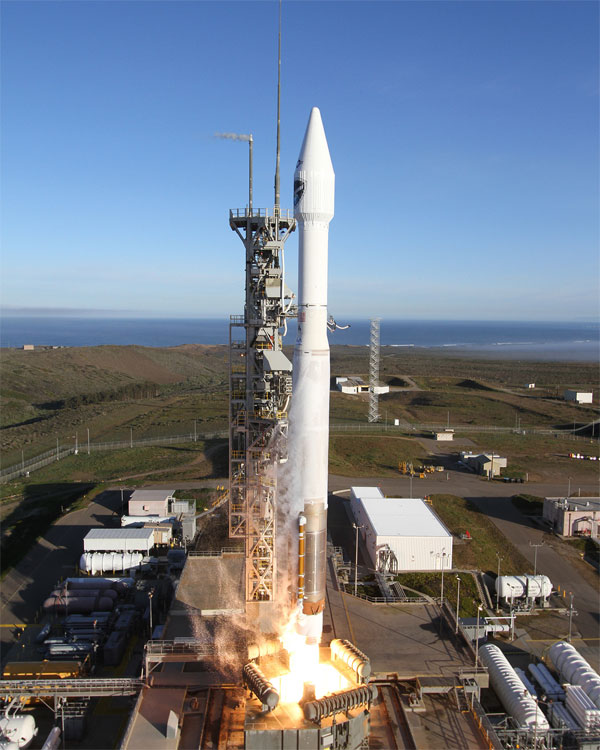 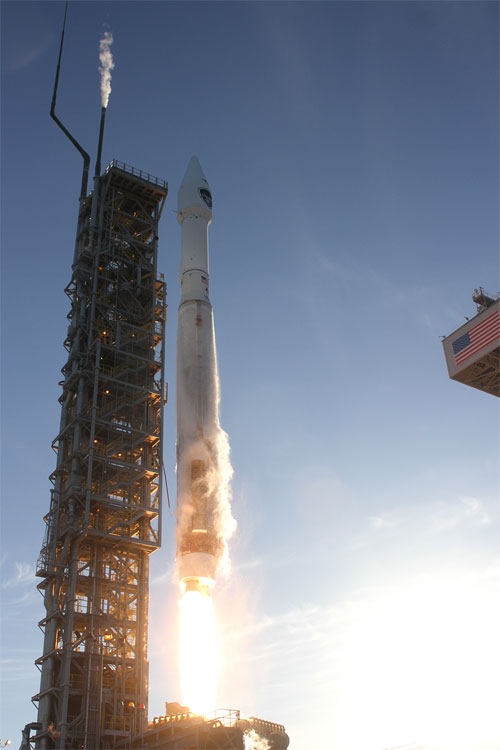 The Lockheed Martin-built DMSP-19 satellite will orbit the Earth at an altitude of about 847 km, in a near-polar, sun-synchronous orbit. The satellite hosts two primary sensors, the Operational Linescan System (OLS) and the Special Sensor Microwave Imager Sounder (SSMIS), built by Northrop Grumman. The OLS provides visible and infrared cloud data with each scan covering an area 1800 miles wide. The instrument is able to cover the entire Earth in about 12 hours. The SSMIS detects precipitation, surface temperature and soil moisture as well as provides all-weather capability for worldwide tactical operations and is particularly useful in typing and forecasting severe storm activity. The spacecraft also carries a suite of additional sensors, which collect a broad range of meteorological and space environmental data for forecasting and analysis. DMSP-19 will join the DMSP constellation providing world class space-based terrestrial and space weather data to support U.S. Forces and its allies around the globe. 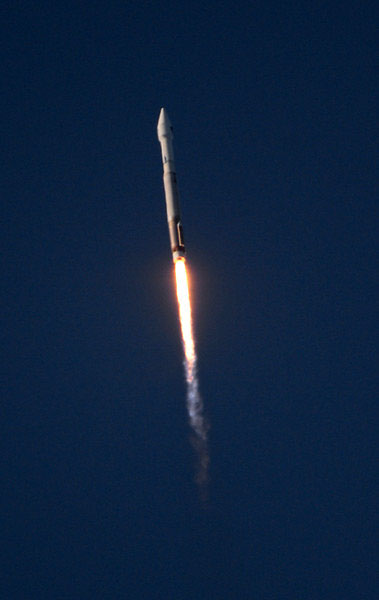 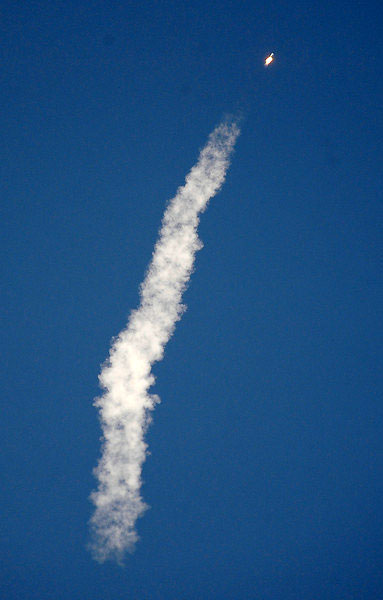