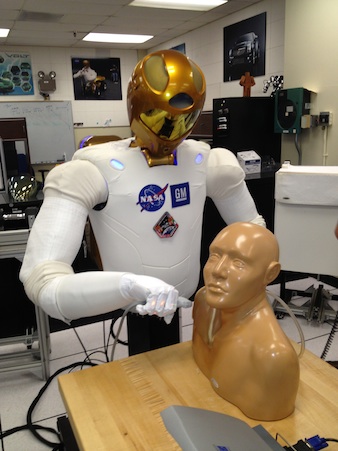 The humanoid robot, Robonaut, developed by NASA, is in training at the Houston Methodist Research Institute to perform medical procedures in space -- someday. (Photo: NASA)

NASA wants a humanoid robot that can perform CPR, draw blood and operate on astronauts aboard the International Space Station or en route to Mars.

A doctor at the Houston Methodist Research Institute is working to make that happen.

"We're trying to get the best care for our astronauts, who are risking their lives to push the boundaries in space," said Dr. Zsolt Garami, an instructor at the Houston Methodist Research Institute, an arm of Houston Methodist Hospital. "Our motivation was really when we saw astronauts perform ultrasounds on each other or on themselves. They just could use an extra hand.... Why not have a robot help? There's already a robot up in the space station, and he's already shown that he can switch buttons reliably. Why not make him a nurse or a physician?"

Garami is working with NASA to teach robots how to perform medical procedures. He said the robots are quick learners -- much quicker than his human students.

Robonaut, the robot Garami is working with, learned in two hours what humans take a week to learn. That hasn't been a popular observation with his colleagues.

"Robonaut is learning extremely fast," he told Computerworld. "His motions, without shaky hands, are very precise and gentle. There were no sudden motions."

The humanoid robot that Garami is working with is a twin to Robonaut 2, or R2, which was brought to the space station early in 2011.

It took about 11 years to build the 300-lb. robot, which runs on 38 PowerPC processors, including 36 embedded chips that control its joints. Each of the embedded processors communicates with the main chip in the robot.

Garami said he hasn't yet worked with Robonaut 2 on the space station, but he is confident that the space-dwelling robot won't have any trouble. His work with Robonaut on the ground has gone extremely well.

So far, the doctor has taught Robonaut to perform ultrasounds, start an IV and give medications. It also can stop bleeding and put in sutures. The robot is just about ready to perform CPR on its own.

Garami also said the robot, at some point, will be able to perform surgery. "Say you're sending two people to Mars and one has a medical emergency," he said. "One astronaut needs help but they're going to be 15 to 20 minutes with no video signal. They're left alone with no connection to Earth.... I feel Robonaut could be a partner for them, helping them."