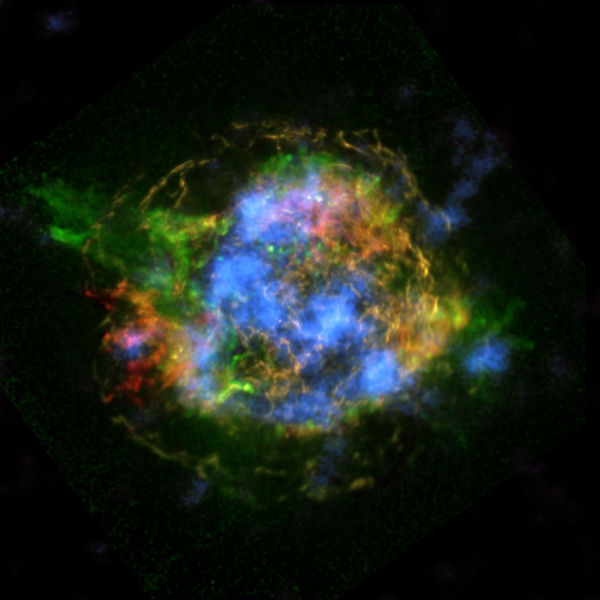 Untangling the Remains of Cassiopeia A
This is the first map of radioactivity in a supernova remnant, the blown-out bits and pieces of a massive star that exploded. The blue color shows radioactive material mapped in high-energy X-rays using NuSTAR. Image credit: NASA/JPL-Caltech/CXC/SAO
.
One of the biggest mysteries in astronomy, how stars blow up in supernova explosions, finally is being unraveled with the help of NASA's Nuclear Spectroscopic Telescope Array (NuSTAR).
The high-energy X-ray observatory has created the first map of radioactive material in a supernova remnant. The results, from a remnant named Cassiopeia A (Cas A), reveal how shock waves likely rip apart massive dying stars.
"Stars are spherical balls of gas, and so you might think that when they end their lives and explode, that explosion would look like a uniform ball expanding out with great power," said Fiona Harrison, the principal investigator of NuSTAR at the California Institute of Technology (Caltech) in Pasadena. "Our new results show how the explosion's heart, or engine, is distorted, possibly because the inner regions literally slosh around before detonating."
Harrison is a co-author of a paper about the results appearing in the Feb. 20 issue of Nature.
Cas A was created when a massive star blew up as a supernova, leaving a dense stellar corpse and its ejected remains. The light from the explosion reached Earth a few hundred years ago, so we are seeing the stellar remnant when it was fresh and young.
Supernovas seed the universe with many elements, including the gold in jewelry, the calcium in bones and the iron in blood. While small stars like our sun die less violent deaths, stars at least eight times as massive as our sun blow up in supernova explosions. The high temperatures and particles created in the blast fuse light elements together to create heavier elements.
NuSTAR is the first telescope capable of producing maps of radioactive elements in supernova remnants. In this case, the element is titanium-44, which has an unstable nucleus produced at the heart of the exploding star.
The NuSTAR map of Cas A shows the titanium concentrated in clumps at the remnant's center and points to a possible solution to the mystery of how the star met its demise. When researchers simulate supernova blasts with computers, as a massive star dies and collapses, the main shock wave often stalls out and the star fails to shatter. The latest findings strongly suggest the exploding star literally sloshed around, re-energizing the stalled shock wave and allowing the star to finally blast off its outer layers.
"With NuSTAR we have a new forensic tool to investigate the explosion," said the paper's lead author, Brian Grefenstette of Caltech. "Previously, it was hard to interpret what was going on in Cas A because the material that we could see only glows in X-rays when it's heated up. Now that we can see the radioactive material, which glows in X-rays no matter what, we are getting a more complete picture of what was going on at the core of the explosion."
The NuSTAR map also casts doubt on other models of supernova explosions, in which the star is rapidly rotating just before it dies and launches narrow streams of gas that drive the stellar blast. Though imprints of jets have been seen before around Cas A, it was not known if they were triggering the explosion. NuSTAR did not see the titanium, essentially the radioactive ash from the explosion, in narrow regions matching the jets, so the jets were not the explosive trigger.
"This is why we built NuSTAR," said Paul Hertz, director of NASA's astrophysics division in Washington. "To discover things we never knew - and did not expect - about the high-energy universe."
The researchers will continue to investigate the case of Cas A's dramatic explosion. Centuries after its death marked our skies, this supernova remnant continues to perplex.
.

Adding a New 'Color' to Palate of Cassiopeia A Images
Elements making up the shredded remains of a massive star that exploded in a supernova are highlighted in this three-panel view. Red and green show iron, and both silicon and magnesium, respectively, as seen by NASA's Chandra X-ray Observatory. Blue shows radioactive titanium-44, mapped by NASA's Nuclear Spectroscopic Telescope Array, or NuSTAR, for the first time.
The radioactive titanium map amounts to new evidence in the case of why Cassiopeia A, and other massive stars, explode. The radioactive material glows in X-rays all the time, while the iron and other elements only glow in X-rays after they are heated by shock waves sent out from the explosion. For this reason, the radioactive titanium provides a more direct look at the heart of the explosion, and tells researchers what happened right when the star blasted apart.
The supernova explosion was not driven by jets, a realization to come out of the NuSTAR data. The green Chandra map shows that jets left imprints in material at the outer portions of the supernova remnant; if the blast had been directly spurred by these jets, then researchers would have expected the radioactive material seen by NuSTAR to have the same jet pattern. As the blue map does not match the green one, the jet-driven models of supernovas are ruled out.
. 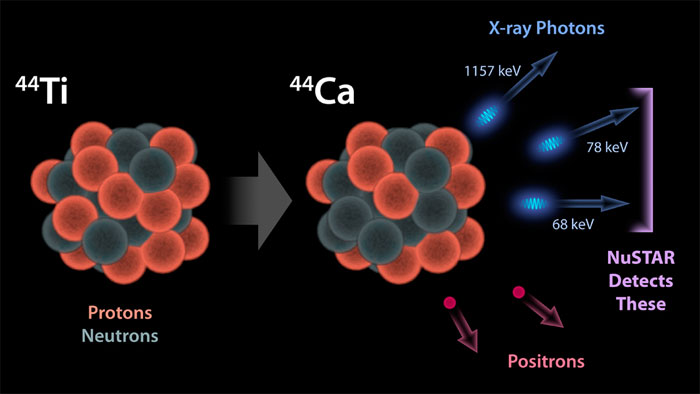 The Creation of Titanium in Stars
This diagram illustrates why NASA's Nuclear Spectroscopic Telescope Array, or NuSTAR, can see radioactivity in the remains of exploded stars for the first time.
When stars blow up in supernovas, they fuse lighter elements together into heavier ones, seeding the universe with the ingredients that go into making stars, planets and even people. Some of the elements produced in supernovas are radioactive, which means they are unstable and decay into lighter elements. When this happens, the radioactive substances give off energy in the form of particles called positrons -- and light, which is made up of photons.
One of the radioactive elements created in supernovas is titanium-44 (44 denotes the total number of protons and neutrons in an atom). Titanium-44 decays into calcium-44, and in the process, gives off high-energy X-ray photons. NuSTAR is the first telescope capable of creating detailed pictures of these high-energy X-ray photons. As a result, NuSTAR can map the radioactivity in supernova remnants for the first time, revealing new details about how massive stars explode.
. 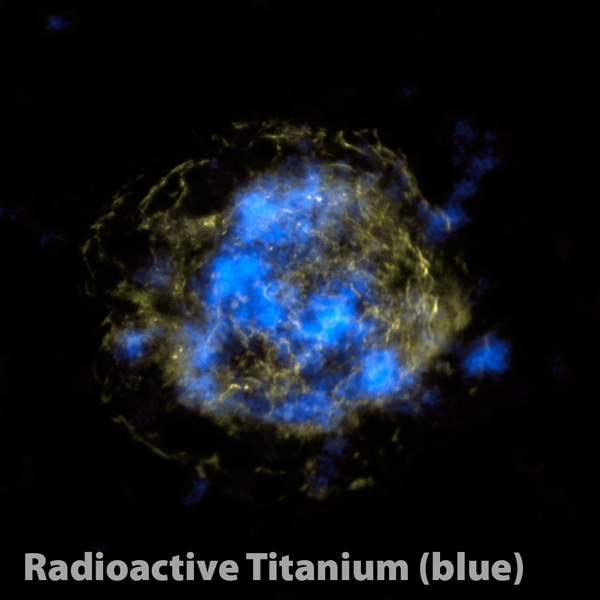 Radioactive Core of a Dead Star
NASA's Nuclear Spectroscope Telescope Array, or NuSTAR, has, for the first time, imaged the radioactive "guts" of a supernova remnant, the leftover remains of a star that exploded. The NuSTAR data are blue, and show high-energy X-rays. Yellow shows non-radioactive material detected previously by NASA's Chandra X-ray Observatory in low-energy X-rays.
Studying radioactive elements offers astronomers a more direct method for probing supernova blasts than observing non-radioactive elements. This is because this radioactive material glows with X-rays no matter what, while the X-rays detected by Chandra and other telescopes are generated only after heating with shock waves from the explosion. Because the non-radioactive material only lights up after the explosion, it does not offer a direct look at the blast.
The NuSTAR results show that titanium is concentrated in clumps at the heart of the star, pointing to a model of supernova explosions that calls for sloshing of the inner core. This sloshing, also known as mild asymmetries, is thought to help trigger stars to ultimately detonate and fling out their outer layers.
. 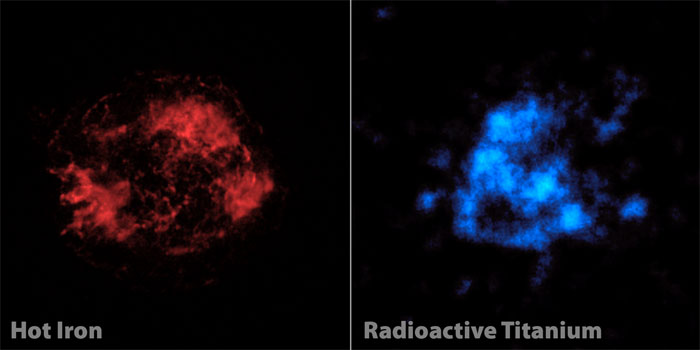 The Case of Missing Iron in Cassiopeia A
When astronomers first looked at images of a supernova remnant called Cassiopeia A, captured by NASA's Nuclear Spectroscopic Telescope Array, or NuSTAR, they were shocked. What they saw didn't match previous observations. The mystery of Cassiopeia A (Cas A), a massive star that exploded in a supernova more than 11,000 years ago, continues to confound researchers.
Previously, NASA's Chandra X-ray Observatory and other telescopes had taken images of Cas A using low-energy X-rays (left). These images show elements, such as iron, that were heated by shock waves released in the explosion. The iron is seen mainly in the outer portions of the star.
NuSTAR is the first telescope capable of creating maps of radioactive material in Cas A, which -- unlike the iron seen by Chandra -- glows even without heating. It is a more direct tracer of what happened right when the star exploded. NuSTAR is able to take pictures of radioactive titanium-44, which gives off high-energy X-rays that the telescope was designed to see.
NuSTAR's view of titanium doesn't match Chandra's view of iron, as seen in this comparison. Astronomers had thought the pictures would line up because the two elements were forged together in the supernova blast. It's possible that the iron is in fact present with the titanium at the heart of the star, but that we can't see it because it's too faint or cool. It's also possible that an entirely new theory of supernova explosions is needed to explain why iron is not in Cas A's core.
. 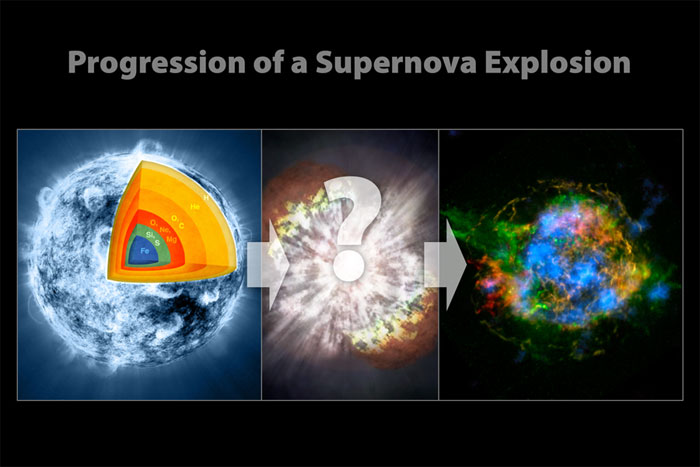 Evolution of a Supernova
These illustrations show the progression of a supernova blast. A massive star (left), which has created elements as heavy as iron in its interior, blows up in a tremendous explosion (middle), scattering its outer layers in a structure called a supernova remnant (right). The supernova explosion itself also creates many elements, including those heavier than iron, such as gold. New observations from NASA's Nuclear Spectroscopic Telescope Array, or NuSTAR, are filling in the missing pieces in the puzzle of how massive stars explode.
. 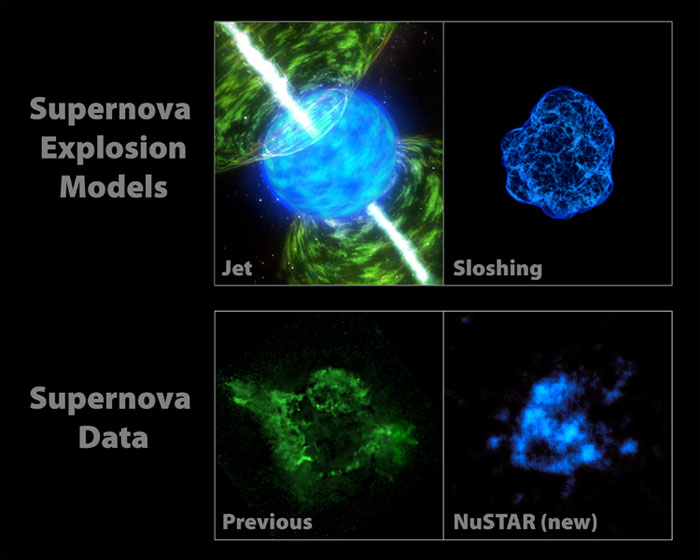 NuSTAR Data Point to Sloshing Supernovas
How massive stars blow up in powerful explosions called supernovas remains a mystery. Theorists have come up with computer simulations to try to recreate what happens, but it's not clear which model is correct. Now, new observations from NASA's Nuclear Spectroscopic Telescope Array of the heart of the Cassiopeia supernova remnant are allowing researchers to test those models with real evidence.
The images at the top of the graphic represent two popular models describing how stars blast apart. The models point to different triggers of the explosion. In jet-driven models, illustrated with an artist's concept shown at left, jets propel the blast wave. In models referred to as having mild asymmetries, material at the core of the star sloshes around, and this sloshing helps energize the shock wave. The graphic representing the sloshing scenario is from a 3-D computer simulation created by Christian Ott and his colleagues at the California Institute of Technology, Pasadena, Calif.
The bottom panel shows previous data from NASA's Chandra X-ray Observatory at left. Chandra sees silicon and magnesium in the Cas A remnant that have been heated up. In looking at the picture, one sees imprints of jets in the heated material. These data alone aren't enough to distinguish between the two supernova explosion models because the silicon and magnesium can be influenced by the material surrounding the supernova, and are not direct tracers of what happened in the explosion. The radioactive titanium observed by NuSTAR, on the other hand, was created deep in the explosion and allows us to see into the guts of the supernova. It is a direct tracer of what happened in the core of the explosion when the star shattered to pieces.
The titanium map looks more like the sloshing, or mild asymmetries, model -- and not the jet-driven model. This is the first observational evidence suggesting that the trigger for supernova explosions comes from a sloshing effect.
.
Quelle: NASA
« Zum vorherigen Eintrag Zum nächsten Eintrag »
3212 Views
Created with page4