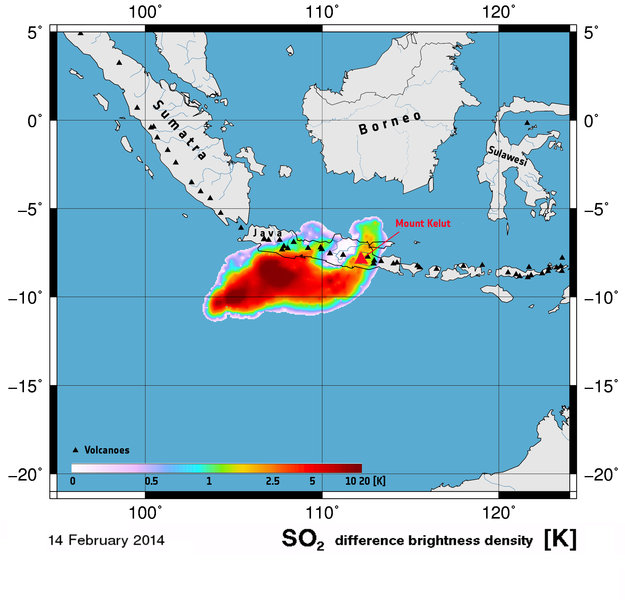 Sulphur dioxide concentration over the Indonesian island of Java in the early morning of 14 February 2014 following the eruption of the Kelut volcano. This image is based on data from the GOME-2 instrument on the MetOp mission.

The Kelut volcano on Indonesia’s Java island erupted late last night. While disaster-management authorities are busy on the ground, satellites are tracking the major cloud of ash and sulphur dioxide as it spreads in the atmosphere.

“The ash has reached high altitudes where commercial aircraft fly and is a significant hazard to aviation,” said Fred Prata from the Norwegian Institute for Air Research.

Airports across Java have closed, and multiple flights have been cancelled throughout the region.

“ESA and its partners are maintaining a constant vigil, and are providing satellite alerts to the relevant authorities through the Support to Aviation Control Service,” said Mr Prata.

The presence of ash in the atmosphere can endanger jet engines.

When an eruption occurs, SACS sends a notification to users, most notably to the Volcanic Ash Advisory Centres (VAACs), and public maps are generated showing the extent and intensity of the volcanic plumes. 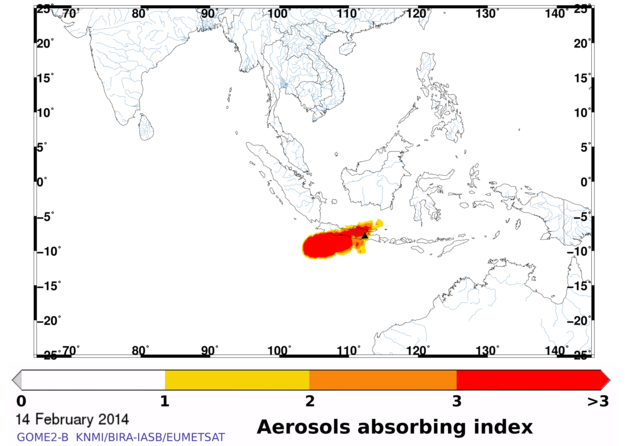 Ash information over the Indonesian island of Java on 14 February 2014 following the eruption of the Kelut volcano. This image is based on data from the GOME-2 instrument on the MetOp mission.

“The VACC in Darwin, Australia – which keeps track of volcanic eruptions mainly in southeast Asia – have been using satellite-derived sulphur dioxide and ash information as a verification tool for many years and are now tracking the plume from last night’s eruption,” said Andrew Tupper, head of Australia’s National Operations Centre at the Bureau of Meteorology.

“The sulphur dioxide imagery from this eruption is very useful indeed.”

Data from the GOME-2 and IASI instruments on Europe’s MetOp-A and -B satellites have been crucial to the monitoring of the Kelut eruption’s ash cloud. 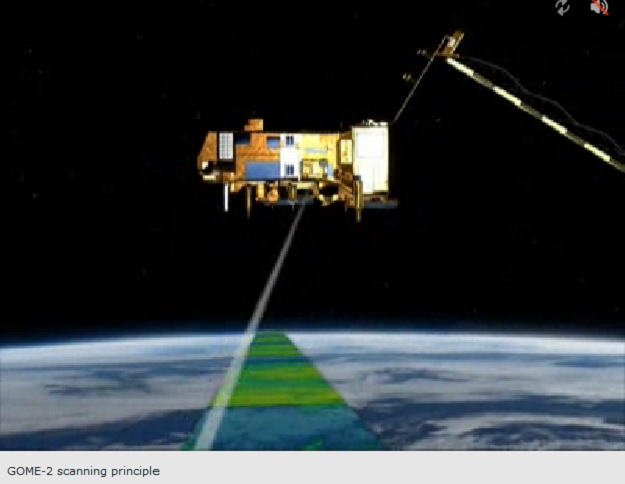 The Global Ozone Monitoring Experiment-2 (GOME-2) is one of the new-generation European instruments carried on MetOp and will continue the long-term monitoring of atmospheric ozone started by GOME on ERS-2 and SCIAMACHY on Envisat. The more advanced GOME-2 is set to make a significant contribution towards climate and atmospheric research, whilst providing near real-time data for use in air quality forecasting.

Different gases in the atmosphere absorb different wavelengths of light. The GOME-2 scanning spectrometer is designed to exploit this fact by capturing light reflected from the Earth's surface and atmosphere and splitting it into different wavelengths to reveal absorption lines, which correspond to certain gases present in the observed sample. GOME-2 will map concentrations of atmospheric ozone as well as nitrogen dioxide, sulphur dioxide, other trace gases and ultraviolet radiation. These profiles are representative of the lowermost 50 km of the Earth's atmosphere. These data are crucial for monitoring stratospheric ozone and atmospheric pollutants to keep a check on the health of the Earth's atmosphere. 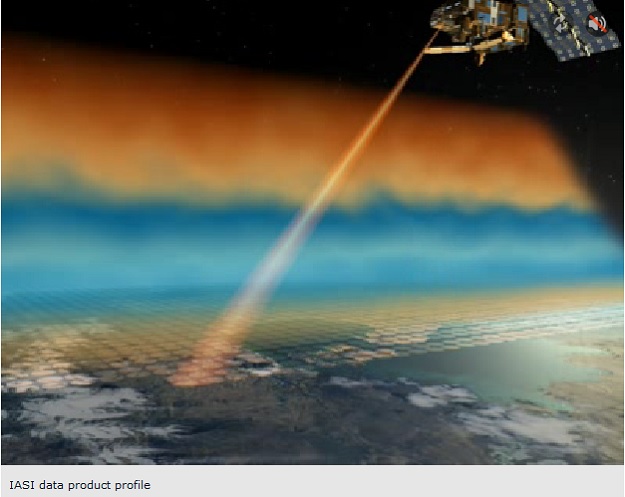 The Infrared Atmospheric Sounding Interferometer (IASI) is probably the most advanced instrument carried on the MetOp satellite. Marking a significant technological step forward, it will provide meteorologists with data of unprecedented accuracy and resolution on atmospheric temperature and humidity with which to improve weather prediction. This European instrument is also destined to provide a wealth of data on various components of the atmosphere to further our understanding of atmospheric processes and the interactions between atmospheric chemistry, climate and pollution. In addition, the IASI will deliver data on land-surface emissivity and sea-surface temperature (in cloud free conditions).

The sophisticated ISAI instrument is a Fourier Transform Spectrometer based on a Michelson Interferometer coupled to an integrated imaging system that observes and measures infrared radiation emitted from the Earth. The optical interferometry process offers fine spectral samplings of the atmosphere in the infrared band between wavelengths of 3.4 and 15.5 microns. This enables the instrument to establish temperature and water vapour profiles in the troposphere and the lower stratosphere, as well as measure quantities of ozone, carbon monoxide, methane and other compounds, all of which play major roles in atmospheric processes such as the greenhouse effect.