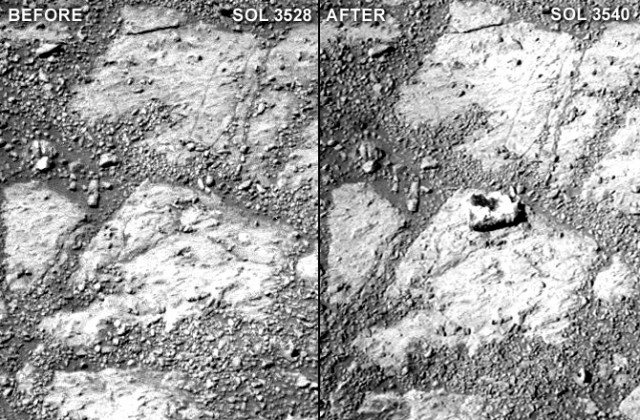 Where did that come from?

As we’ve learned from our recent explorations of Mars, there’s really not a whole lot going on there. Yes, there are geological processes at work, but most of them move at a nearly imperceptible pace. So that's why after nearly ten years of Martian rover exploration, NASA scientists were surprised to see a rock suddenly “appear” in front of the Mars Rover last week.
You can see the rock in the images above. The image on the left shows the area in front of Opportunity on Sol 3528. The image to the right was taken 12 Martian days later and is almost identical—except for a rock the size of a donut that had unexpectedly shown up
NASA announced the discovery of the rock at an event at Caltech in Pasadena this past Thursday night, dubbing the rock “Pinnacle Island.” “It’s about the size of a jelly doughnut,” NASA Mars Exploration Rover lead scientist Steve Squyres told Discovery News. “It was a total surprise, we were like ‘wait a second, that wasn’t there before, it can’t be right. Oh my god! It wasn’t there before!’ We were absolutely startled.”
Unless someone has figured out a way to punk Opportunity all the way from Earth, mission scientists can come up with just two explanations for the sudden appearance of Pinnacle Island: a really close call with a meteor or something Opportunity did. It’s possible that the mystery rock came from a nearby meteor strike, with the force of impact blowing Pinnacle Island off the surface to land in front of Opportunity. Squyers thinks it’s far more likely that Opportunity somehow moved the rock during maneuvers.
“So my best guess for this rock... is that it’s something that was nearby,” Squyers told Discovery News. “I must stress that I’m guessing now, but I think it happened when the rover did a turn in place a meter or two from where this rock now lies.”
One of Opportunity’s steering actuators has stopped working, so when the rover made a recent turn, the skidding of the affected wheel atop the bedrock may have bumped the mystery rock, sending it a few feet through the Martian atmosphere to land in front of the rover.
However the rock got there, NASA is going to study the heck out of it. According to Squyers, the side facing up hasn't been exposed to the Martian atmosphere for "billions of years," so researchers may be able to learn something new from its appearance.
Quelle: ars-technica
.

A mysterious rock which appeared in front of the Opportunity rover is “like nothing we’ve ever seen before”, according to Mars exploration scientists at Nasa.

Experts said they were “completely confused” by both the origins and makeup of the object, which is currently being investigated by Opportunity’s various measuring instruments.
Astronomers noticed the new rock had “appeared” without any explanation on an outcrop which had been empty just days earlier. The rover has been stuck photographing the same region of Mars for more than a month due to bad weather, with scientists at the Jet Propulsion Laboratory (JPL) in California monitoring the images it sends.
Nasa issued a Mars status report entitled “encountering a surprise”, and lead Mars Exploration rover scientist Steve Squyres told a JPL event it seems the planet literally “keeps throwing new things at us”.
He said the images, from 12 Martian days apart, were from no more than a couple of weeks ago. “We saw this rock just sitting here. It looks white around the edge in the middle and there’s a low spot in the centre that’s dark red – it looks like a jelly doughnut.
“And it appeared, just plain appeared at that spot – and we haven’t ever driven over that spot.”
. 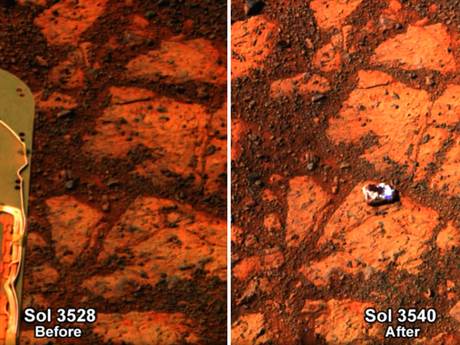 Images captured by Opportunity show the mysterious rock 'appeared' on an outcrop that had been empty just 12 Martian days ('Sols') earlier Squyres said his team had two theories on how the rock got there – that there’s “a smoking hole in the ground somewhere nearby” and it was caused by a meteor, or that it was “somehow flicked out of the ground by a wheel” as the rover went by.
“We had driven a metre or two away from here, and I think the idea that somehow we mysteriously flicked it with a wheel is the best explanation,” Squyres said.
Yet the story got even stranger when Opportunity investigated further. Squyres explained: “We are as we speak situated with the rover’s instruments deployed making measurements of this rock.
“We’ve taken pictures of both the doughnut and jelly parts, and the got the first data on the composition of the jelly yesterday.
“It’s like nothing we’ve ever seen before,” he said. “It’s very high in sulphur, it’s very high in magnesium, it’s got twice as much manganese as we’ve ever seen in anything on Mars.
“I don’t know what any of this means. We’re completely confused, and everyone in the team is arguing and fighting (over what it means).
“That’s the beauty of this mission… what I’ve realised is that we will never be finished. There will always be something tantalising, something wonderful just beyond our reach that we didn’t quite get to – and that’s the nature of exploration.”
Squyres was speaking at an event marking the 10th anniversary of the arrival of Opportunity and Spirit on the surface of Mars.
While Spirit lost contact with Earth and was later declared “dead” in 2010, Opportunity has now roamed the planet far in excess of what was originally planned as a three-month mission. Nasa said that with its maximum speed of just 0.05mph, as of “Sol 3547” (15 January 2014) Opportunity had covered just over 24 miles (38km).
Quelle: THE INDEPENDENT
.
.
Update: 15.02.2014
.
NASA löst Stein-Rätsel auf dem Mars: "Wir fuhren über ihn" 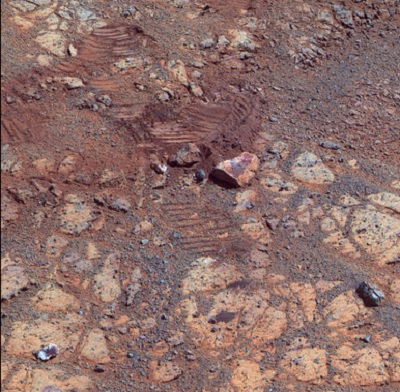 The mystery of the jelly doughnut-shaped rock that seemed to materialize on Mars is a mystery no more.

After taking a close look at the small white rock with a deep red center dubbed "Pinnacle Island," a research team has determined it is not a fungus-like organism, or a piece of Martian ejecta that was shot into the air by a nearby unseen impact.

Instead, it is just a small piece that was broken off a larger rock when one of the wheels of NASA's Opportunity rover drove over it, according to a release from the Jet Propulsion Laboratory.

"Once we moved Opportunity a short distance, after inspecting Pinnacle Island, we could see directly uphill an overturned rock that has the same unusual appearance," said Opportunity Deputy Principal Investigator Ray Arvidson in a statement. "We drove over it. We can see the track. That's where Pinnacle Island came from."

The small rock became a subject of worldwide interest soon after it was spotted Jan. 8 by Opportunity's cameras. It was puzzling because it did not show up in images the rover took of the same location taken 12 days earlier.

"One of the things I like to say is Mars keeps throwing things at us," Steven Squyres, principal investigator for the Mars Exploration Rover Mission, said during a presentation describing the appearance of the mysterious rock in January.

"We're completely confused. We're having a wonderful time. Everyone on the team is arguing and fighting," he said at the time.

The story took a strange turn at the end of January when Rhawn Joseph, who describes himself as a neuroscientist and astrobiologist, filed court papers demanding that NASA do more to investigate the mysterious rock.

Joseph asked the judge to order the space agency to closely photograph the rock from several angles, thoroughly examine it, and share that information with the public.

In the court papers Joseph suggests that the rock may not be a rock at all, but rather a fungus-like organism. If so, that would mean Opportunity had discovered life on Mars.

A NASA spokesman responded with this: "As we do with all our scientific research missions, NASA will continue to discuss any new data regarding the rock and other images and information as new data becomes available."

Even if the rock is not a sign of extraterrestrial life, it is still interesting. Opportunity's instruments have revealed that it has high levels of sulfur and manganese,  water soluble ingredients that may have been concentrated in the rock thanks to the action of water.

"This may have happened just beneath the surface relatively recently, or it may have happened deeper below the ground long ago," Arvidson said in a statement. "And then by serendipity, erosion stripped away material above it and made it accessible to our wheels."

A mystery? Not anymore. But it appears it was still a stroke of luck.

Researchers have determined the now-infamous Martian rock resembling a jelly doughnut, dubbed Pinnacle Island, is a piece of a larger rock broken and moved by the wheel of NASA's Mars Exploration Rover Opportunity in early January.

Only about 1.5 inches wide (4 centimeters), the white-rimmed, red-centered rock caused a stir last month when it appeared in an image the rover took Jan. 8 at a location where it was not present four days earlier.

More recent images show the original piece of rock struck by the rover's wheel, slightly uphill from where Pinnacle Island came to rest.

"Once we moved Opportunity a short distance, after inspecting Pinnacle Island, we could see directly uphill an overturned rock that has the same unusual appearance," said Opportunity Deputy Principal Investigator Ray Arvidson of Washington University in St. Louis. "We drove over it. We can see the track. That's where Pinnacle Island came from."

Examination of Pinnacle Island revealed high levels of elements such as manganese and sulfur, suggesting these water-soluble ingredients were concentrated in the rock by the action of water. "This may have happened just beneath the surface relatively recently," Arvidson said, "or it may have happened deeper below ground longer ago and then, by serendipity, erosion stripped away material above it and made it accessible to our wheels."

Now that the rover is finished inspecting this rock, the team plans to drive Opportunity south and uphill to investigate exposed rock layers on the slope.

Opportunity is approaching a boulder-studded ridge informally named the McClure-Beverlin Escarpment, in honor of engineers Jack Beverlin and Bill McClure. Beverlin and McClure were the first recipients of the NASA Medal of Exceptional Bravery for their actions on Feb. 14, 1969 to save NASA's second successful Mars mission, Mariner 6, when the launch vehicle began to crumple on the launch pad from loss of pressure.

"Our team working on Opportunity's continuing mission of exploration and discovery realizes how indebted we are to the work of people who made the early missions to Mars possible, and in particular to the heroics of Bill McClure and Jack Beverlin," said rover team member James Rice of the Planetary Science Institute, Tucson, Ariz. "We felt this was really a fitting tribute to these brave men, especially with the 45th anniversary of their actions coming today."

Opportunity's work on the north-facing slope below the escarpment will give the vehicle an energy advantage by tilting its solar panels toward the winter sun. Feb. 14 is the winter solstice in Mars' southern hemisphere, where Opportunity has been working since it landed in January 2004.

"We are now past the minimum solar-energy point of this Martian winter," said Opportunity Project Manager John Callas of NASA's Jet Propulsion Laboratory (JPL) in Pasadena, Calif.  "We now can expect to have more energy available each week. What's more, recent winds removed some dust from the rover's solar array. So we have higher performance from the array than the previous two winters."

During Opportunity's decade on Mars, and the 2004-2010 career of its twin, Spirit, NASA's Mars Exploration Rover Project has yielded a range of findings proving wet environmental conditions on ancient Mars -- some very acidic, others milder and more conducive to supporting life.