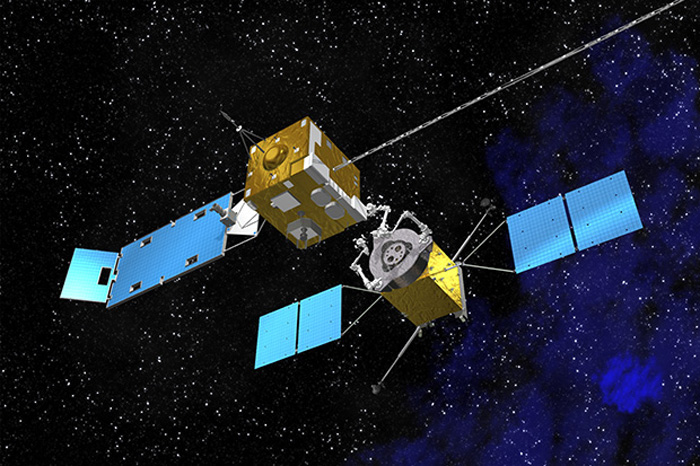 The whole concept of servicing satellites in space is just so crazy that with the very rare exception of bajillion dollar pieces of hardware like Hubble, satellites just aren't designed to be repaired or refueled. They get put into orbit, they last until they run out of fuel or suffer some other sort of basic malfunction, and then they just get forgotten about, left to one of any number of depressing fates: orbiting the Earth until the end of time, de-orbiting whenever they feel like it onto hopefully not someone's head, or having a violently destructive close encounter with a fellow satellite resulting in a chain reaction of debris that will increase exponentially until low Earth orbit turns into a shell of pointy metallic confetti that's just as deadly as you'd expect pointy metallic confetti to be.
But what if we could service satellites, hmm? NASA's been taking small steps toward the giant leap of making that possible.
If you remember, DARPA has been exploring ways of hacking dead satellites to bits and reassembling them into zombies. As cool as that is, NASA isn't trying to do anything so, um, zombie-ish. Rather, they've been working for quite a while on putting all the pieces together that would be required to go up into space, find a satellite, and pump some extra fuel into it to keep it alive. The next-generation Canadarm was designed with this in mind, and DEXTRE has been practicing for a live robotic refueling mission, and the latest step is a teleoperated real fuel transfer test here on Earth:
.

.
When we said up at the top of this article that the concept of servicing satellites is crazy enough that they haven't been designed for it, we're talking about the fact that the fuel valves have been wired shut. So, getting access to these valves is one of the trickiest parts of the whole business. Fortunately, it's not something that has to be rushed, and so teleoperation (even teleoperation on a noticeable time delay) is a realistic way to go about it. Once the valve is open, a nasty chemical called nitrogen tetroxide gets pumped into the satellite's fuel tank at 300 PSI. It's highly toxic, but has the useful property that it's hypergolic when mixed with hydrazine, meaning that it will spontaneously combust without requiring an ignition source.
This particular test is just one very specific aspect of satellite servicing, but the principle being explored here goes far beyond simple fuel transfers, as NASA describes:
The servicing capabilities SSCO is developing could greatly expand options for government and commercial operators in the future, providing new ways to recover from anomalies or prolong the lifespans of their satellites. Technologies needed for servicing -- including autonomous rendezvous and docking systems, advanced robotic tools, and propellant transfer systems, among others -- can help the Agency on its path to extended human exploration, observatory servicing, the on-orbit assembly of large space structures, and perhaps even planetary defense.
Quelle: IEEE-Spectrum
« Zum vorherigen Eintrag Zum nächsten Eintrag »
3841 Views
Created with page4