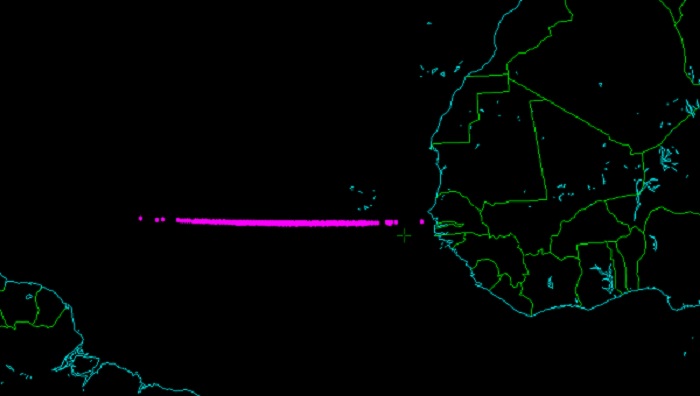 A small asteroid hit Earth just hours after it was first discovered, astronomers said, but likely burned up in the planet’s atmosphere.

The asteroid entered the Earth’s atmosphere over the Atlantic Ocean somewhere between Central America and East Africa, most likely off the coast of West Africa, at about 2:30 a.m. Universal Time (8:30 a.m. Moscow time), according to calculations by dynamicist Stephen Chesley.

Physicist Peter Brown told Sky & Telescope Magazine that the asteroid’s impact energy was equivalent to the explosive power of 500 to 1,000 tons of TNT and was no bigger than a small car, meaning it was too small to reach the ground intact.

2014 AA is the first asteroid to be discovered this year.

The first new asteroid identified this year didn't last long. Asteroid 2014 AA was spotted by a telescope early New Year's morning, and fizzled up over the Atlantic Ocean a day later.

2014 AA is only the second incoming object astronomers have tracked before it hit the Earth – and they almost missed it. The first such object, 2008 TC3, was discovered on 6 October 2008 about 20 hours before it became a fireball over Sudan.

Word of 2008 TC3's approach spread quickly, allowing observers to track it and predict when and where it would hit the atmosphere to within about a second and a kilometre, says Bill Gray, an amateur astronomer in Maine who calculates asteroid orbits. Thanks to that precision, a team from the University of Khartoum, Sudan, was able to recover fragments that reached the ground.

Astronomers were not so lucky with 2014 AA. Like 2008 TC3, the new asteroid was discovered with an automated telescope in the Catalina Mountains north of Tucson by the University of Arizona's Mount Lemmon Survey. The survey automatically tracks moving objects and calculates preliminary orbits, and then posts the data to a network of astronomers for follow-up observations.

But 2014 AA's holiday-period arrival meant it nearly slipped by unnoticed. With only 90 minutes of automatic observations recorded, Gray calculated the object's orbit in the evening of 1 January and realised it was on a collision course with Earth. He had insufficient data to pinpoint the time and place of impact, but preliminary analysis of infrasound observations has since narrowed it down to around 0200 GMT in the mid-Atlantic, says Steve Chesley of NASA's Jet Propulsion Laboratory in Pasadena, California.

The asteroid was 2 to 4 metres wide, which makes it a little smaller than 2008 TC3 and much smaller than the 17-metre-wide meteor that exploded over Chelyabinsk, Russia, in February 2013.

Objects of 2014 AA's size hit Earth every few months, and are too small to pose a threat to the planet. But tracking their motions through the atmosphere could help astronomers recover the pieces that survive, says Peter Jenniskens of the SETI Institute in Mountain View, California, who led the effort to collect meteorites from 2008 TC3 and the Chelyabinsk meteor.

Although 2014 AA is probably lost to the sea, learning to track others like it could have big payoffs for science. "It's like a low-cost sample-return mission," he says.

This animated GIF shows Asteroid 2014 AA, discovered by the NASA-sponsored Catalina Sky Survey on Jan. 1, 2014, as it moved across the sky.
Image Credit:
CSS/LPL/UA
.
Early Wednesday morning (Jan. 1, 2014), while New Year's 2014 celebrations were still underway in the United States, the Catalina Sky Survey near Tucson, Ariz., collected a single track of observations with an immediate follow-up on what was possibly a very small asteroid -- 7 to 10 feet (2 to 3 meters) in size -- on a potential impact trajectory with Earth.

Designated 2014 AA, which would make it the first asteroid discovery of 2014, the track of observations on the object allowed only an uncertain orbit to be calculated. However, if this was a very small asteroid on an Earth-impacting trajectory, it most likely entered Earth's atmosphere sometime between 11 a.m. PST (2 p.m. EST) Wednesday and 6 a.m. PST (9 a.m. EST) Thursday.

Using the only available observations, three independent projections of the possible orbit by the independent orbit analyst Bill Gray, of the Minor Planet Center in Cambridge, Mass., and Steve Chesley, of NASA's Near-Earth Object Program Office at the Jet Propulsion Laboratory in Pasadena, Calif., are in agreement that 2014 AA would hit Earth's atmosphere. According to Chesley, the potential impact locations are widely distributed because of the orbit uncertainty, falling along an arc extending from Central America to East Africa. The most likely impact location of the object was just off the coast of West Africa at about 6 p.m. PST (9 p.m. EST) Jan. 1.

It is unlikely asteroid 2014 AA would have survived atmospheric entry intact, as it was comparable in size to asteroid 2008 TC3, which was about 7 to 10 feet (2 to 3 meters) in size. 2008 TC3 completely broke up over northern Sudan in October 2008. Asteroid 2008 TC3 is the only other example of an object discovered just prior to hitting Earth. So far, there have been a few weak signals collected from infrasound stations in that region of the world that are being analyzed to see if they could be correlated to the atmospheric entry of 2014 AA.

NASA's Near-Earth Object Program at NASA Headquarters, Washington, manages and funds the search, study and monitoring of asteroids and comets whose orbits periodically bring them close to Earth. JPL manages the Near-Earth Object Program Office for NASA's Science Mission Directorate in Washington. JPL is a division of the California Institute of Technology in Pasadena.