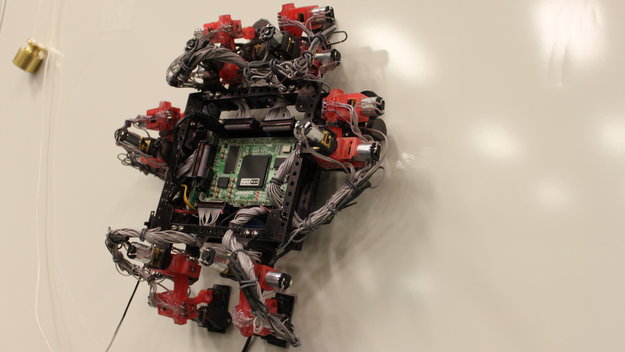 WALL-CRAWLING GECKO ROBOTS CAN STICK IN SPACE TOO

Climbing robots that mimic the stickiness of gecko lizard feet could work in space as well as on Earth, ESA has shown, raising the prospect of hull-crawling automatons tending future spacecraft.

Robots crawling across spacecraft surfaces are a common sight in science fiction films from Silent Running to Wall-E. But, in reality, how might they stick in place while still remaining mobile?

Researchers from ESA and Simon Fraser University in Canada subjected gecko-inspired ‘dry adhesive’ materials to space vacuum and temperatures, finding the stickiness is retained throughout.

Engineers from the University’s School of Engineering Science have demonstrated such adhesives with a family of ‘Abigaille’ crawling robots.

“This approach is an example of ‘biomimicry’, taking engineering solutions from the natural world,” explained Michael Henrey of Simon Fraser University.

A gecko’s feet are sticky due to a bunch of little hairs with ends just 100–200 nanometres across – around the scale of individual bacteria. This is sufficiently tiny that atomic interactions between the ends of the hairs and the surface come into play. 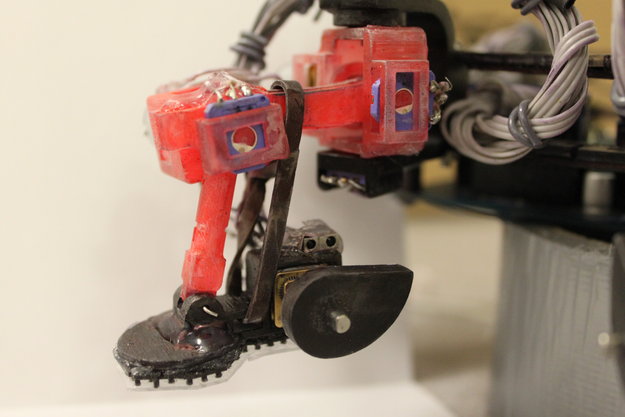 One of the Abigaille wall-crawler robot's six feet, with six degrees of freedom for agile climbing and dry adhesives on its footpad to keep it stuck to surfaces. Tensioned with an elastic band, it is operated by a detaching motor cam with infrared sensor. Its rigid plastic foot is covered with macro-posts, covered in turn with micrometre-scale micro-posts, with mushroom caps on their ends. These are tiny enough that atomic interactions between the plastic and the surface come into play.

“We’ve borrowed techniques from the microelectronics industry to make our own footpad terminators,” he said. “Technical limitations mean these are around 100 times larger than a gecko’s hairs, but they are sufficient to support our robot’s weight.”

Interested in assessing the adhesive’s suitability for space, Michael tested it in ESA’s Electrical Materials and Process Labs, based in the Agency’s ESTEC technical centre in Noordwijk, the Netherlands, with additional support from ESA’s Automation and Robotics Lab.

“The reason we’re interested in dry adhesives is that other adhesive methods wouldn’t suit the space environment,” Michael notes.

“Scotch, duct or pressure-sensitive tape would collect dust, reducing their stickiness over time. They would also give off fumes in vacuum conditions, which is a big no-no because it might affect delicate spacecraft systems.

“A depth-sensing indentation instrument was used inside a vacuum chamber to precisely assess the dry adhesive’s sticking performance,” said ESA’s Laurent Pambaguian. “Experimental success means deployment in space might one day be possible.” 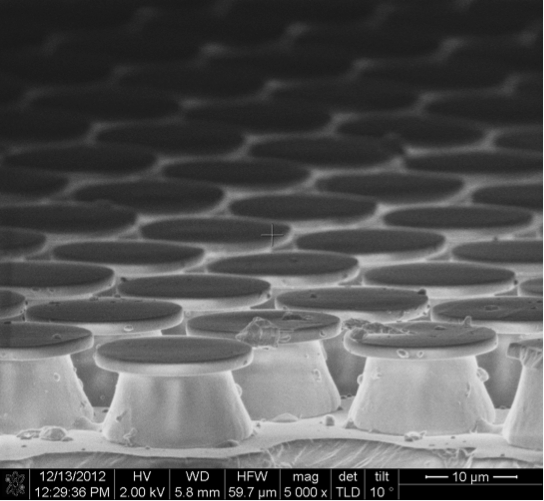 Mushroom-shaped Gecko-inspired 'footpad terminators' used to stick climbing robots on vertical surfaces. Manufactured using techniques borrowed from the microelectronics industry, the micrometre-scale terminators are sufficiently tiny that atomic interactions between them and the surface come into play.

“It’s very expensive to upgrade hardware once it is up in space so the idea would be to fly a more general robot in the first place,” Michael said. “This could then be adapted through software upgrades for different tasks that weren’t anticipated at the start of the project.

“Our Abigaille climbing robot is therefore quite dexterous, with six legs each having four degrees of freedom, so it should be handle environments that a wheeled robot could not.

“For example, it can transition from the vertical to horizontal, which might be useful for going around a satellite or overcoming obstacles on the way.” 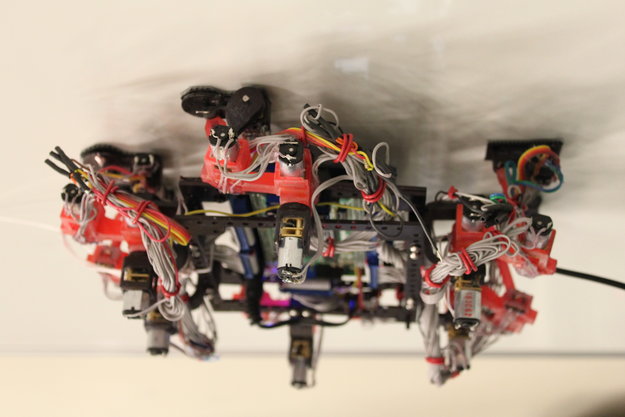 The six-legged Abigaille climbing robot is quite dexterous, able to transition from vertical to horizontal surfaces. It clings to walls using a gecko-inspired dry adhesive technology. ESA testing shows it is in principle workable in the vacuum conditions of space.