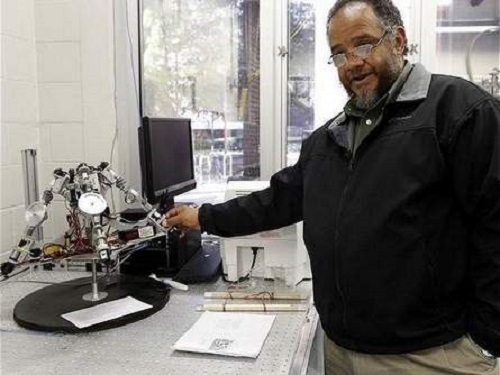 Norm Fitz-Coy, director of the Advance Space Technologies and Engineering Center at the University of Florida, is pictured with a control movement gyroscope in the Small Satellite Lab at the UF New Engineering building.

GAINESVILLE — Norm Fitz-Coy and two of the graduate students running the SwampSat project at the University of Florida check their computers and consult with a giant TV screen projecting a map of Earth dotted with several yellow squares representing satellites.

SwampSat is out there somewhere.

The aerospace professor and his team have been trying to make contact with the wayward satellite since its launch last month. A single parabolic line bisects the blue screen — indicting where SwampSat should be in its orbit the next time it passes over Gainesville.

“We haven’t made contact yet,” Fitz-Coy says and shrugs. “That’s natural.”

After two years of research and testing to miniaturize satellite technology to a size that would squeeze into a 4-inch cube the size of a Chinese takeout box, they finally got to see their baby launched into space.

“It’s a very big accomplishment, with all our hard work, to finally be able to see it go to launch,” said Bungo Shiotani, a doctoral student and project leader for SwampSat.

SwampSat is one of 29 miniature research satellites, known as CubeSats, launched Nov. 19 in a U.S. Air Force Minotaur 1 rocket from the Mid-Atlantic Regional Spaceport at NASA’s Wallops Flight Facility in Virginia. It takes time for those satellites to separate and gain enough distance from each other that their signals are distinct and traceable to the ground crews monitoring them.

“It’s like taking 29 children to the mall and setting them loose, and then telling them to call us,” Fitz-Coy says. Each satellite is tuned to a specific frequency, but even then, “you don’t know exactly where to look.”

The launch was part of a mission to “validate launch and range improvements for NASA and the military,” NASA said in a news release. Tests include automated trajectory targeting, range-safety planning and flight termination systems, NASA said.

CUBESATS ARE NEXT WAVE

The rocket’s main payload is the Space Test Program Satellite-3, an Air Force technology demonstration mission. A supplemental payload includes 11 CubeSats as part of NASA’s CubeSat Launch Initiative — a program that allows universities and other agencies to piggyback their research satellites on other missions.

The November launch is NASA’s fourth Educational Launch of Nanosatellite missions — a sort of ferry or trolley service for institutions to get their projects into space without having to spend millions of dollars on a launch.

“Our future missions will be standing on the developments the CubeSat community has created,” he said.

NASA is spearheading the development of this next generation of satellites because it’s been forced to deal with congressional funding cuts. It showed its creativity and frugality with the Mars Curiosity rover launch and successful landing.

Now it’s turning the same ethos to developing highly maneuverable and reusable satellites that are hundreds of times cheaper to build than traditional satellites while at the same time embracing more up-to-date, state-of-the art technology.

The typical satellite can cost billions to develop, millions to build and millions more to launch.

A hurricane-tracking satellite costs in the neighborhood of $300 million, while a satellite with a missile-warning device can cost $700 million, NASA Science Engineer Waleed Abdalati said.

Big satellites also take a long time to research and build — as long as a decade, Fitz-Coy said. Because each satellite is a one of a kind, built to specific missions and specifications, researchers have to start from scratch, testing and designing and redesigning. They usually lock in the technology by the second year, he said, which means the technology can be obsolete by launch.

The Mars Science Laboratory, or Curiosity, for example, has a 2-megapixel camera, the best available in 2002 when NASA engineers were putting the rover together, said Kunal Patankar, a doctoral student and mechanical leader for SwampSat. When the Curiosity was launched in 2011, the technology was already nine years old.

SwampSat is the first CubeSat built by UF’s Space Systems Group. Its mission will be to test an onboard miniaturized flight attitude stabilization system developed by Fitz-Coy and his team.

To get to where it is now, UF created the Advanced Space Technologies Research and Engineering Center with a $5 million grant from the National Science Foundation in 2009, and hired Fitz-Coy to run it.

A centerpiece of the space lab is a thermal vacuum chamber — a gleaming silver canister the size of a fridge that simulates conditions in space. It is supplied with heat and liquid nitrogen so it can blast up to 100 degrees centigrade and just as quickly drop to 100 below freezing, Patankar said.

And it can suck the air out of the chamber to simulate low-orbit altitudes of near space, he said. “If you have an air bubble in a piece of solder on some equipment, it can explode in space,” Fitz-Coy said. “In space, minor defects make a big difference.”

By recreating those conditions, researchers can find defects.

They had to make a small-scale version of a Central Movement Gyroscope used in satellites for guidance and stabilization. The 20-inch model they built is a fraction of the size of the gyroscopes used in standard satellites, and smaller still than those used in the International Space Station.

And they had to build the test rig for the gyroscope mock-up.

The next challenge was miniaturizing the gyroscope to fit into the bottom half of a 4-inch cube. Once they did that, they had to devise the computer brain, guts and still have room left for a lithium battery, communications gear and the payload.

Launching the satellite was thrilling but really just the beginning of the mission.

Talk about finding a needle in a haystack. It is a very fine needle — one tiny cube with a faint radio signal and a narrow bandwidth among thousands of much larger and stronger satellites in a vast multidimensional haystack orbiting 400 miles above Earth.

And they have only a couple of shots a day to make that connection. The satellite passes overhead twice a day, and on the horizon twice a day, Fitz-Coy said. During those moments, they have about 10 minutes to make contact.

“There is a lot of suspense there,” Fitz-Coy said. “You’ve invested two years in something, and waiting for that 10-minute window to make contact.”

When that moment comes, it will be an exciting day, said Patankar. “You don’t always see the accomplishment,” Patankar said. “When you get it right, it’s rewarding.”