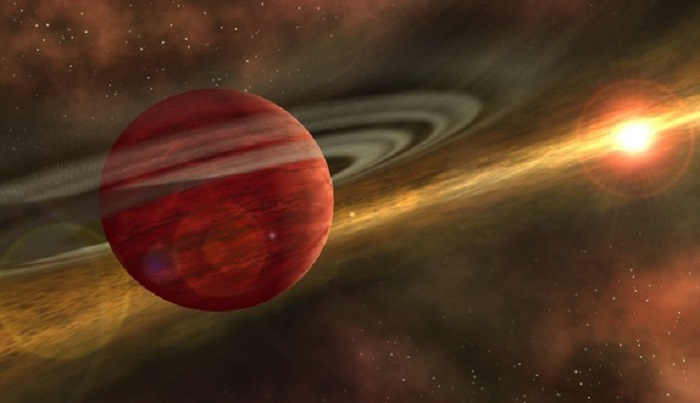 An enormous alien planet — one that is 11 times more massive than Jupiter — was discovered in the most distant orbit yet found around a single parent star.

The newfound exoplanet, dubbed HD 106906 b, dwarfs any planetary body in the solar system, and circles its star at a distance that is 650 times the average distance between the Earth and the sun. The existence of such a massive and distantly orbiting planet raises new questions about how these bizarre worlds are formed, the researchers said.

"This system is especially fascinating because no model of either planet or star formation fully explains what we see," study lead researcher Vanessa Bailey, a fifth-year graduate student in the University of Arizona's department of astronomy, said in a statement. 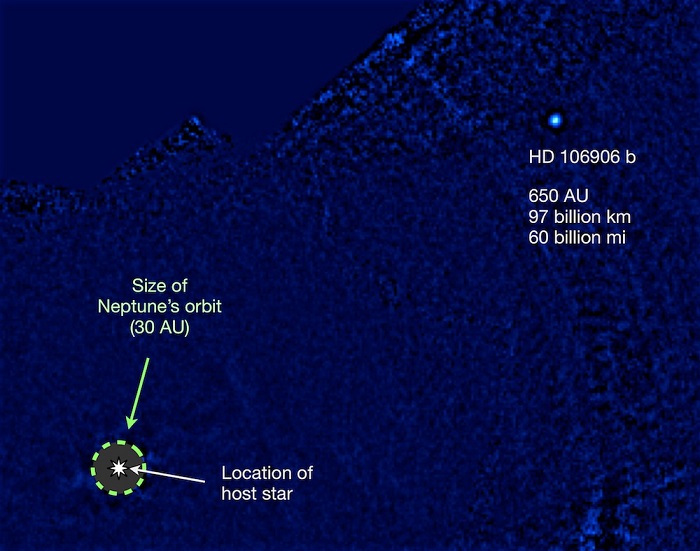 This is a discovery image of planet HD 106906 b in thermal infrared light. The planet is more than 20 times farther away from its star than Neptune is from the sun.

In the most commonly accepted theories of planet formation, it is thought that planets that orbit close to their parent star, such as Earth, began as small, asteroid-type bodies that clumped together in the primordial disk of gas and dust around the burgeoning star. Yet, this process operates too slowly to explain how giant planets form far away from their star, the researcher said.

"A binary star system can be formed when two adjacent clumps of gas collapse more or less independently to form stars, and these stars are close enough to each other to exert a mutual gravitation attraction and bind them together in an orbit," she explained.

In the HD 106906 system, the star and planet may have collapsed independently, but the materials that clumped together to form the planet were insufficient for it to grow large enough to ignite into a new star, Bailey said.

But, there are still problems with this scenario. For one, difference between the masses of two stars in a binary system is typically no more than a ratio of 10 to 1.

Researchers are also keen to study the new planet, because leftover material from when the planet and star formed can still be detected.

"Systems like this one, where we have additional information about the environment in which the planet resides, have the potential to help us disentangle the various formation models," Bailey said. "Future observations of the planet's orbital motion and the primary star's debris disk may help answer that question."