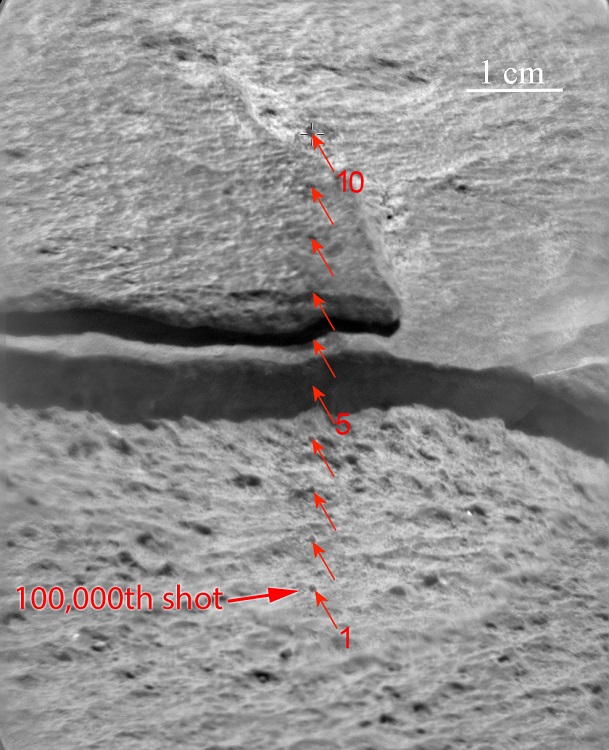 Since landing on Mars in August 2012, NASA's Curiosity Mars rover has fired the laser on its Chemistry and Camera (ChemCam) instrument more than 100,000 times at rock and soil targets up to about 23 feet (7 meters) away.
Image Credit:
NASA/JPL-Caltech/LANL/CNES/IRAP/UNM
.

NASA's Curiosity Mars rover has passed the milestone of 100,000 shots fired by its laser. It uses the laser as one way to check which chemical elements are in rocks and soils.

The 100,000th shot was one of a series of 300 to investigate 10 locations on a rock called "Ithaca" in late October, at a distance of 13 feet, 3 inches (4.04 meters) from the laser and telescope on rover's mast. The Chemistry and Camera instrument (ChemCam) uses the infrared laser to excite material in a pinhead-size spot on the target into a glowing, ionized gas, called plasma. ChemCam observes that spark with the telescope and analyzes the spectrum of light to identify elements in the target.

"Passing 100,000 laser shots is terribly exciting and is providing a remarkable set of chemical data for Mars," said ChemCam co-investigator Horton Newsom of the University of New Mexico, Albuquerque.

As of the start of December, ChemCam has fired its laser on Mars more than 102,000 times, at more than 420 rock or soil targets. Virtually every shot yields a spectrum of data returned to Earth. Most targets get zapped at several points with 30 laser pulses at each point. The instrument has also returned more than 1,600 images taken by its remote micro-imager camera.

An international team of scientists and students is mining information from ChemCam to document the diversity or materials on the surface inside Mars' Gale Crater and the geological processes that formed them. "These materials include dust, wind-blown soil, water-lain sediments derived from the crater rim, veins of sulfates and igneous rocks that may be ejecta from other parts of Mars," Newsom said.

Each pulse delivers more than a million watts of power for about five one-billionths of a second. The technique used by ChemCam, called laser-induced breakdown spectroscopy, has been used to assess composition of targets in other extreme environments, such as inside nuclear reactors and on the sea floor. Experimental applications have included environmental monitoring and cancer detection. NASA's Mars Science Laboratory Project, using the Curiosity rover, is the first mission to use it on another planet.

ChemCam is one of 10 instruments in Curiosity's science payload. The U.S. Department of Energy's Los Alamos National Laboratory, Los Alamos, N.M., developed ChemCam in partnership with scientists and engineers funded by the French national space agency, CNES, the University of Toulouse and research agency, CNRS. The laser was built by Thales, Paris. 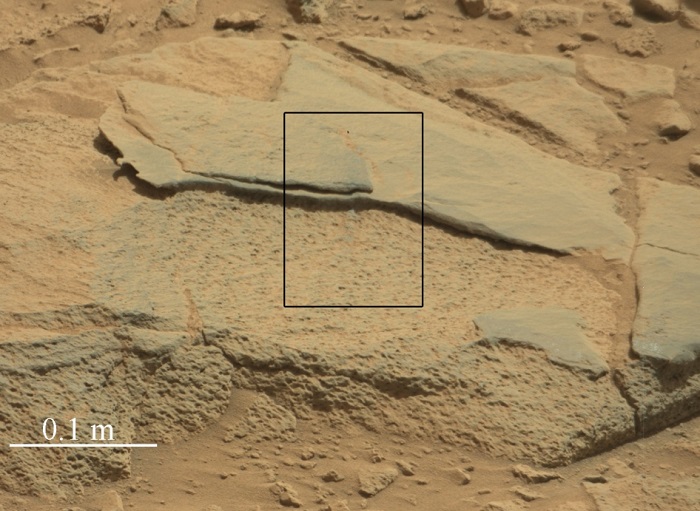 The rock "Ithaca" shown here, with a rougher lower texture and smoother texture on top, appears to be a piece of the local sedimentary bedrock protruding from the surrounding soil in Gale Crater. NASA's Curiosity Mars rover used its Mast Camera (Mastcam) to take this image during the 439th Martian day, or sol, of Curiosity's work on Mars (Oct. 30, 2013).  The black-outline rectangle indicates the area where the rover's Chemistry and Camera instrument (ChemCam) used its laser and remote micro-imager to inspect Ithaca. That inspection included the 100,000th laser shot fired by ChemCam on Mars.  The 0.1 meter scale bar at lower left is about 4 inches. 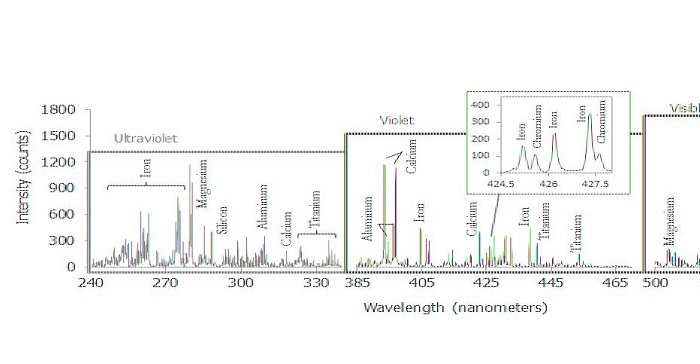 This graph shows a spectrum recorded by the Chemistry and Camera instrument (ChemCam) in NASA's Curiosity Mars rover. The instrument measured intensity of light at 6,144 wavelengths of ultraviolet, visible and infrared light emitted when it fired its laser at a rock target called "Ithaca." This spectrum averages data from multiple laser firings at the same point on the rock, the lowest point in a series of targeted points on the same rock examined on Oct. 30, 2013. The firings at this particular point included the 100,000th laser shot by Curiosity on Mars.

The spectrum is typical of Martian volcanic (basalt) material. Although Ithaca is a sedimentary rock, the particles in the sediments that became the rock originated in igneous source rocks. The elements identified from the spectrum include a standard major-element suite of silicon, magnesium, aluminum, calcium, sodium, potassium, oxygen and titanium. Chromium and manganese, though not labelled, were also present.

NASA's Jet Propulsion Laboratory, Pasadena, Calif., manages the Mars Science Laboratory Project and the mission's Curiosity rover for NASA's Science Mission Directorate in Washington. The rover was designed and assembled at JPL, a division of the California Institute of Technology in Pasadena.