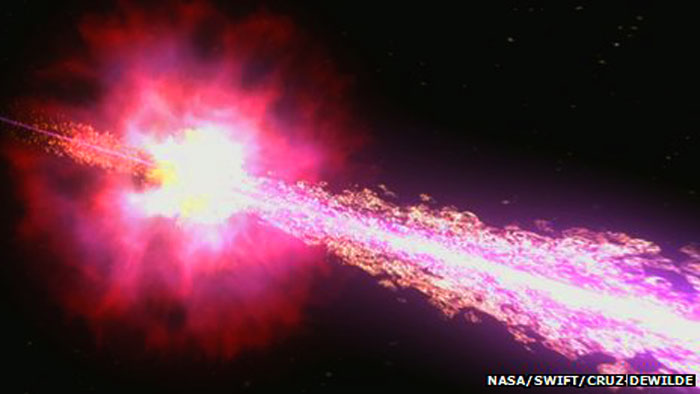 New research explains celestial phenomenon recorded earlier this year
.
Issued by University of Leicester Press Office on 21 November 2013
.
For the first time, a team of astronomers from around the world, including experts from the University of Leicester, have used data from satellites and observatories to explain the brightest Gamma-ray Burst (GRB) ever recorded.
An unusually bright GRB was observed on April 27 2013 by the Swift satellite and new research published in Science, has found this to be a result of an extremely powerful stellar explosion. This explosion produced a jet of matter moving close to the speed of light, which was formed when a massive star collapsed to make a black hole at its centre. As a result, a blast wave caused the rest of the star to expand outwards, producing a glowing shell of debris observed as an extremely bright supernova.
The event happened in a galaxy a quarter of the way across the Universe. Although far away, this is much closer than a typical GRB allowing astronomers to confirm for the first time that the same object can simultaneously create both a powerful GRB and a supernovae. GRBs and supernova are the brightest objects in nature.
Professor Paul O’Brien of the University of Leicester’s Department of Physics and Astronomy explained: “We normally detect GRBs at great distance, meaning they usually appear quite faint. In this case the burst happened only a quarter of the way across the Universe meaning it was very bright. On this occasion, a powerful supernova was also produced, something we have not recorded before alongside a powerful GRB and we will now be seeking to understand this occurrence.”
GRBs are relatively rare phenomena, but the study of their behaviour under extreme conditions enables researchers to continue testing the laws of physics.
Professor Julian Osborne, Swift team leader at the University of Leicester’s Department of Physics and Astronomy said: “The rapid reaction of Swift has enabled us to discover many new and unexpected aspects of GRBs, the strong confirmation of the basic theory by this new very bright burst reassures us that we are on the right track in understanding these extraordinary explosions.”
Professor Nial Tanvir, also of the University of Leicester’s Department of Physics and Astronomy added: “Seeing such a bright flash a quarter of the way across the observable universe really brings home the astonishing power of these explosions.”
This research, which is published this week in Science in a paper led by Dr Alessandro Maselli from INAF-ISAF Palermo, Italy, concludes that the GRB has properties consistent with that of much more distant examples. The extraordinary brightness of the April 27 event will allow for the most stringent test yet of how GRBs and supernovae can be formed together.
.
Quelle: University of Leicester
3490 Views
Created with page4