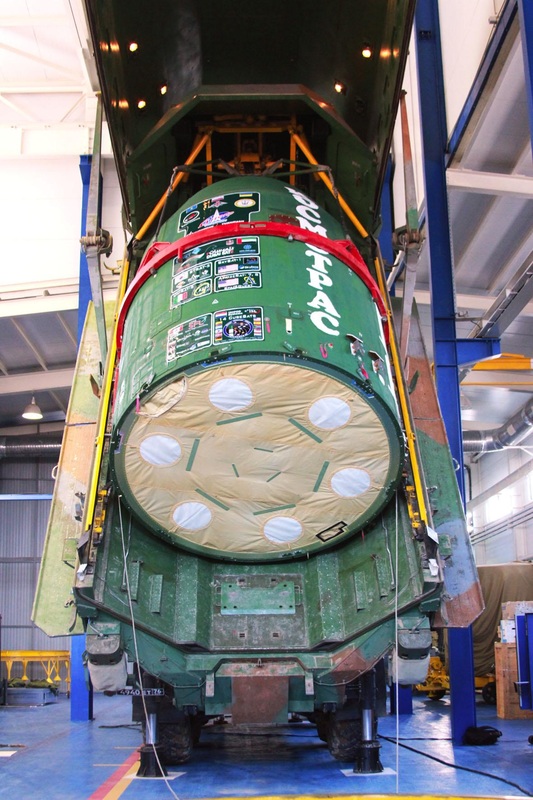 Dnepr ready to Launch 32 Satellites & break Minotaur's Record
.
Just over a day after an American Minotaur I rocket set the record for most active payloads launched by a single launch vehicle, a Dnepr rocket is poised to break the record, launching an even greater number of satellites. Minotaur I blasted of from the Wallops Flight Facility, Virginia on Wednesday at 1:15 UTC and delivered 29 satellites to orbit, including the STPSat-3 primary payload and 28 CubeSats (plus two additional non-separating payloads).
Dnepr is set to launch with 32 satellites (+1 non-separating payload) on Thursday at 7:10 UTC from the Dombarovsky missile range at Yasny Launch Base, Russia. The latest official release from launch operator Kosmotras was published on November 15 confirming that the integrated Space Head Module was installed atop the Dnepr launcher and that final testing was underway. The ISIS Launch Services Weblog confirmed this week that the launch remains planned for Thursday.
In the days leading up to launch, the first and second stage of the Dnepr were loaded with 149,900 Kilograms and 36,740kg of hypergolic propellants. Dnepr's third stage was fueled with 1,910kg of Unsymmetrical Dimethylhydrazine fuel and Nitrogen Tetroxide Oxidizer before installation on the launcher.
Final checkouts were on tap this week leading to the launch countdown that begins about eight hours before liftoff for the satellites and three hours before T-0 for the Dnepr launch vehicle. The silo-launched, three-stage Dnepr Launch Vehicle stands 34.4 meters tall and is 3.0 meters in diameter with a liftoff mass of 211,000 Kilograms.
. 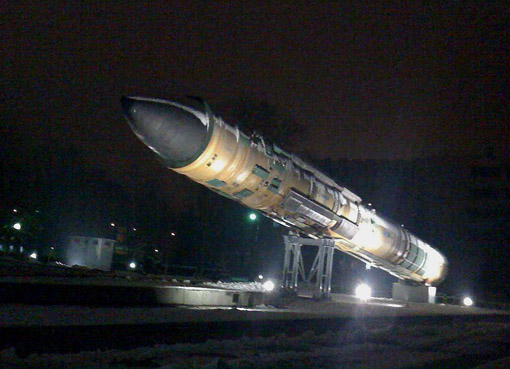 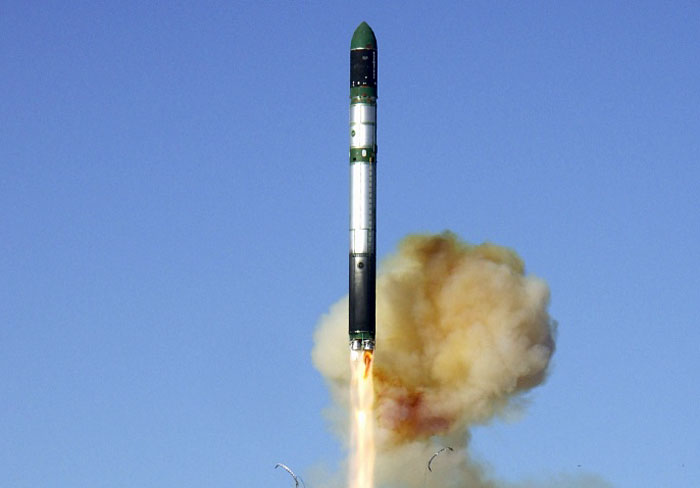 The Dnepr rocket (RS-20B) with 23 satellites will be launched on Thursday from the Yasny cosmodrome in Orenburg region, the Russian Federal Space Agency (Roskosmos) told Itar-Tass.
“The Dnepr rocket with 23 satellites will be launched today from the Dombarovsky base of the Strategic Missile Forces in the Yasny district of the Orenburg region. The planned blastoff time is 11:10 Moscow time (07:10 GMT),” the agency said.
“The satellites’ injection into orbit will take place at 11:26 Moscow time (07:26 GMT),” Roskosmos specified.
The Dnepr rocket will place into orbit the DubaiSat-2 satellite and 22 small spacecraft, including 14 CubeSat mini-satellites, as well as STSAT-3, SKYSAT-1, UNISat-5, AprizeSat-7, AprizeSat-8, WNISat, BRITE-PL and GOMX-1 satellites.
The DubaiSat-2 satellite was built on the order of the Emirates Institution for Advanced Science and Technology (EIAST) on the basis of the DubaiSat-1 satellite that had been launched in 2009. DubaiSat-2 has a number of technical innovations: higher data transmission speed, high-resolution image, similar to Google Earth, as well as a state-of-the-art camera with sensors.
SKYSAT-1 is the first spacecraft of an innovative constellation of Earth remote sensing mini-satellites, which will make high-resolution satellite images of any area several times a day. Its customer is Korea Aerospace Research Institute. Dnepr is a Russian-Ukrainian carrier rocket. It was created on the basis of the RS-20 intercontinental ballistic missile (NATO reporting name — SS-18 “Satan”). The Dnepr program envisages the conversion of more than 150 missiles RS-20 into carrier rockets. One of its 16 launches ended in failure — on June 21, 2010.
Quelle: ITARTASS
.
Update: 22.11.2013
. 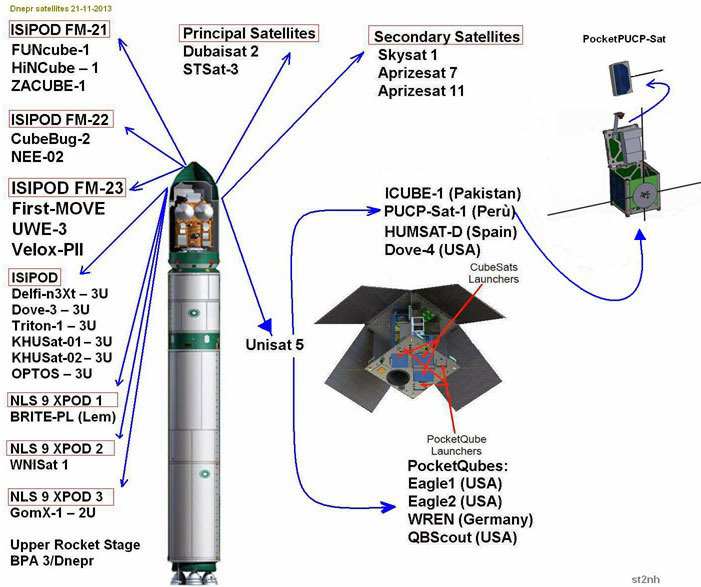