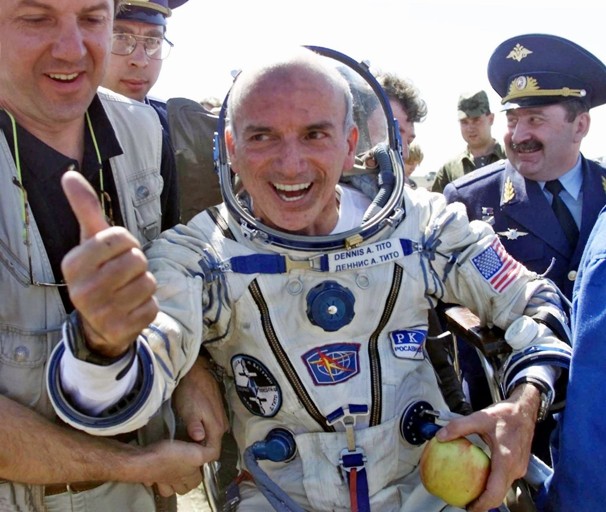 American multimillionaire and the world's first paying space tourist, Dennis Tito, gestures shortly after his landing in Kazakhstan in 2001. Tito, 72, is set to announce a scheme for a “high risk” human mission to Mars. Curiosity on Mars: View the NASA rover’s images, including self-portraits, from the Red Planet.

Vowing to inspire “all Americans,” the world’s first space tourist, Dennis Tito, is set to announce a plan Wednesday for a “high risk” human mission to Mars. It would launch, by necessity of orbital mechanics, in January 2018.
Now all Tito needs is a billion dollars, give or take. And a big rocket. And a spaceship.
“It’s not nuts,” said one of Tito’s team of aerospace industry advisers ahead of an afternoon press briefing in Washington. “This is possible.”
The “Mission for America” would be a two-person, budget-class fly-by of the red planet. There will be no landing. No footprints and flags in ruddy soil, no rock-grabbing, no search for fossils.
This is strictly a blink-and-you-miss-it trip to Earth’s neighbor and back again. The 501-day journey would be about the quickest available with current rockets.
Only celestial harmony makes such a plan feasible: A once-every-15-years alignment of Earth and Mars. With the two planets’ orbits pinching as close as they ever do, a so-called low-energy trajectory could shoot a modest craft to Mars and back with minimal fuel.
Tito, 72, won’t fly the mission. Instead, he will send a man and woman — preferably married — to fairly represent humanity, said a person familiar with the plan who asked for anonymity because the public announcement has not yet been made.
A news release announcing the Inspiration Mars mission said the first human trip beyond the moon would “encourage all Americans to believe again in doing the hard things that make our nation great.”
While NASA is not funding the mission, Tito recently briefed agency leadership. “NASA will continue discussions with Inspiration Mars to see how the agency might collaborate on mutually-beneficial activities,” said NASA spokesperson David Weaver.
The hardware required includes a capsule for launching and landing, a habitat module and a big rocket or several small ones.
Industry experts said Tito’s team has been in talks with several “new space” companies such as Space Exploration Technologies, or SpaceX, as well as established aerospace contractors such as Boeing to supply the rocket and spaceship.
Tito has assembled a team that includes experts in life support systems and space medicine. A team at NASA Ames Research Center in California has already begun work on a heat shield to protect the Mars ship from the fastest atmospheric reentry ever attempted.
A technical paper Tito and his team will present at an aerospace conference next week suggests flying a modified Dragon capsule built by SpaceX, the commercial company set to launch its third non-crewed supply run to the space station on Friday. A human-rated Dragon may be available as soon as 2015, but a company spokeswoman said there was no deal in place with Tito’s group.
The mission — if Tito can pull it off — would break the deep-space barrier for the first time and reshuffle the possibilities for human space travel. The last time humans sailed beyond Earth orbit was the final Apollo moon mission in 1972.
“If you have a billion or two dollars, it’s technically feasible,” said Robert Zubrin, president of the Mars Society and a longtime proponent of colonizing that planet. “My main point of skepticism is not technical, it’s, ‘Do these guys have a billion dollars?’ ”
They apparently do not. Tito did not crack the Forbes 500 billionaires list, and on Wednesday he will announce the nonprofit Inspiration Mars Foundation to begin fundraising for this “philanthropic” flight. The foundation is in talks with the National Geographic Society and the Challenger Center for Space Science Education to bring the mission into classrooms and otherwise broadcast it.
Tito began his career as a rocket scientist at the Jet Propulsion Laboratory, plotting trajectories of NASA’s first robotic missions to Mars and Venus. He then made a fortune as one of the first “quants,” who apply hard math to soft markets. He has skirted skeptics and broken the Earth-bound rules of spaceflight before. In 2001, Tito paid Russia a reported $20 million to vacation at the international space station. NASA refused to sign off on the trip until four days before launch.
In 2010, President Obama set NASA’s sights on a human Mars landing — a much more difficult mission than the one Tito plans — in the 2030s. But that mission is largely notional and unfunded.
At closest approach, Tito’s crew won’t even peep Mars’s volcanoes and valleys below. Mars itself will block their view as they slingshot around the far side — the dark side — of the planet.
Risks include deep-space radiation, missing a small “keyhole” in space near Mars and shooting out to infinity and vaporizing upon reentry. But a private venture can afford bigger risks than a taxpayer-funded NASA mission, said Roger Launius, a historian at the Smithsonian’s National Air and Space Museum. “They don’t need permission from anybody for an interplanetary trip.”
Buzz Aldrin, the second man to walk on the moon and author of the upcoming book “Mission to Mars,” said: “I’ve talked to Dennis, and I’ve strongly encouraged him. The purpose is to inspire, to say we’re going to do something and then we do it.”
NASA’s support for tracking the Mars ship and communicating with its crew is crucial, Aldrin said.
He noted the mission would return to Earth in May 2019 — just in time for the 50th anniversary of his Apollo 11 moonwalk.
.
Quelle: The Washington Post

Millionaire revises plan for Mars flyby in 2018: Now it's up to NASA 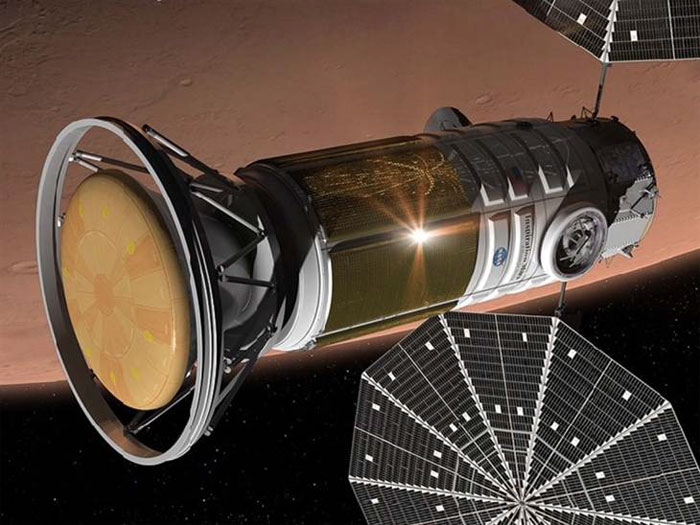