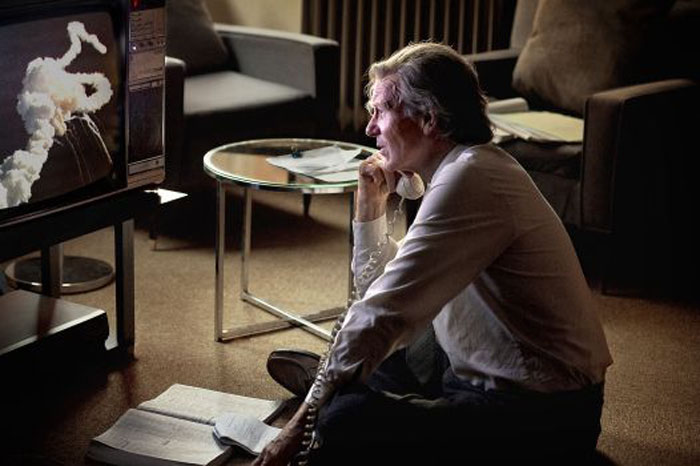 Four stars out of five: The Challenger Disaster: Feature film. 9 p.m. ET/PT Saturday on the Discovery Channel and Science Channel.
SAN FRANCISCO — We don't automatically think of science as the stuff of riveting filmmaking, but from "The Story of Louis Pasteur," to "Edison, the Man," ''Madame Curie," to "The Right Stuff," Hollywood has hit dramatic pay dirt with scientific subjects over the years.
For its first dramatic feature film, the Science Channel looked into the not too distant past to tell the story of how one scientist challenged the U.S. government and NASA to ensure the real story behind the Challenger disaster wasn't swept under a bureaucratic rug.
The true story of Dr. Richard Feynman's seemingly Quixotic quest for the truth of what caused the 1986 shuttle explosion, airing concurrently Saturday on the Science and Discovery Channels, is made even more dramatic by the fact that he was battling cancer that would take his life two years later. He lived long enough, though, to influence the final report by the special Challenger committee, and to write his own appendix.
Feynman, played to gruff and tousled perfection by Oscar winner William Hurt ("Kiss of the Spider Woman"), was a Nobel Prize-winning physicist who was initially reluctant to be part of the special commission on the Challenger to be chaired by former Secretary of State William Rogers (Brian Dennehy, "Death of a Salesman"). It doesn't take much in the film for his wife (Joanne Whalley, "The Borgias") to convince her husband that the loss of the seven astronauts, including New Hampshire teacher Christa McAuliffe, was reason enough for him to lend his expertise to the quest for what caused the explosion.
From the beginning, though, Feynman realizes the deck is stacked against a full airing of the facts when Rogers declares that, of course, NASA did an excellent job.
The commission, which also includes Dr. Sally Ride (Eve Best, "The King's Speech"), the first US woman in space, is supposed to function as a unit. No one is supposed to go off on his own to pursue possible causes for the shuttle explosion.
Naturally, that's exactly what Feynman does, going on his own to NASA operations in Huntsville, Al., and staying on in Florida to examine recovered pieces of the shuttle stored in an empty hanger after the rest of the committee returns to Washington..
Feynman has few friends on the commission, but he does get encouragement from two members, Ride and Maj. Gen. Donald E. Kutyna (Bruce Greenwood, "Star Trek Into Darkness"), who had been in charge of the Titan rocket program that was usurped in a bureaucratic move to shore up the economic imbalance of the NASA shuttle program. Kutyna had reason to be skeptical of NASA, but he also knew that whatever the cause of the explosion that cold January day in Florida, Feynman was the only one likely to uncover it because he was the only truly independent member of the panel.
Many people know what caused the disaster because it was major news when Feynman found the answer. He strategically chose a moment in the televised commission hearings to dip a piece of a shuttle O-ring into a glass of ice water to prove that when the rubber was subjected to freezing temperatures, it would not resume its original shape as it was designed to do in the shuttle. The morning of Jan. 28, 1986, the temperature at Cape Canaveral, Fl, was below freezing.
''The Challenger Disaster" is such a good drama you may not be aware at first that you're also learning something about the scientific process. But Feynman's painstaking commitment to find the truth was the most effective defense against NASA's attempt to preserve its own reputation and against bureaucratic inertia.
''The Challenger Disaster" feels at times like an actual thriller, but that isn't only because of James Hawes' well-paced direction: It's because the real story has elements of a thriller. At one point, Feynman types up a document about his preliminary findings, sends it to the commission to be distributed to other members and finds it has mysteriously disappeared.
In the end, the reason behind the bureaucratic dust storm over Challenger has to do with petty, budgetary self-defensiveness and agency hubris. The Titan project had been absorbed by NASA, because the space agency promised it would be able to place spy satellites in orbit through the shuttle program. There had already been six aborted shuttle lift-offs by the time Challenger was ready to launch. The previous night, NASA had been warned that the cold temperature might imperil the launch, but the agency ignored the warning.
You could say that NASA "lost" when the O-rings were determined to be the cause of the explosion, but in the long run, the agency won. Thanks to Feynman's dogged persistence, NASA had to adjust its priorities, especially with regard to its private contractors like Morton-Thiokol which had developed the O-ring seals and was found at fault for the Challenger disaster.
''The Challenger Disaster" is not only a noble first effort by the Science Channel, but an eminently watchable one as well. The film is both dramatically viable and instructive. Yes, we learn about science, but perhaps more important, we also learn about standing your ground no matter what challenges you face.
. 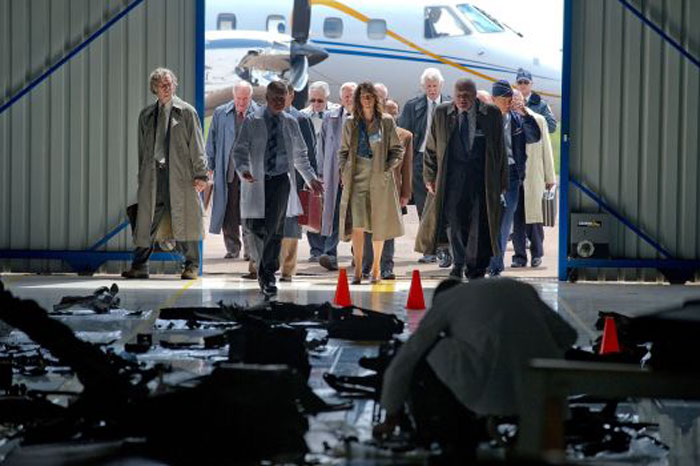