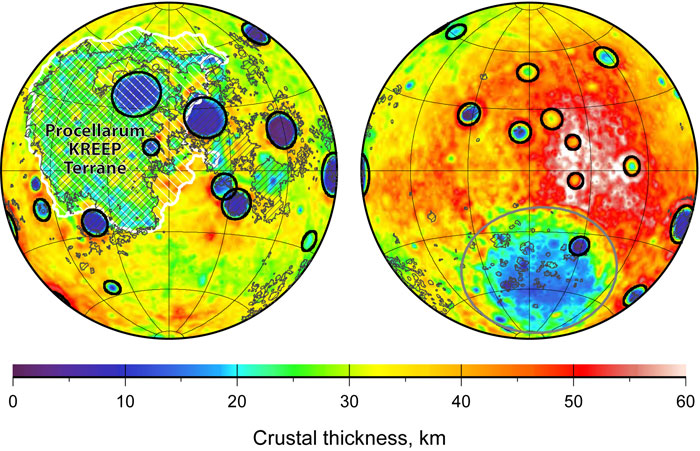 Maps from the GRAIL spacecrafts reveal more large craters (big circles) and thinner crust (blue) on the moon's nearside (left) than on the farside (right), where the crust is thicker (red).

Large craters cover more of the moon’s surface on its nearside than its farside, according to new maps from NASA’s GRAIL spacecrafts.
Scientists haven’t always agreed on the size of lunar craters because lava filled many of the biggest impact basins on the side of the moon that faces Earth. For nine months in 2012, astronomers used GRAIL to map the thickness of the crust in and around the craters. Based on the data and simulations of lunar impacts, the hotter nearside of the moon would have formed craters with up to twice the diameter compared with similar impacts on the cooler farside.
The GRAIL data also suggest that astronomers should not use measurements of the basins on the nearside of the moon to draw conclusions about the rate at which craters struck the planets of the inner solar system 4 billion years ago, the researchers report November 8 in Science.
.
Abstract:
Maps of crustal thickness derived from NASA’s Gravity Recovery and Interior Laboratory (GRAIL) mission revealed more large impact basins on the nearside hemisphere of the Moon than on its farside. The enrichment in heat-producing elements and prolonged volcanic activity on the lunar nearside hemisphere indicate that the temperature of the nearside crust and upper mantle was hotter than that of the farside at the time of basin formation. Using the iSALE-2D hydrocode to model impact basin formation, we found that impacts on the hotter nearside would have formed basins with up to twice the diameter of similar impacts on the cooler farside hemisphere. The size distribution of lunar impact basins is thus not representative of the earliest inner solar system impact bombardment.
.
Quelle: ScienceNews
.

Harder and softer landing
These simulations show that the crash of an asteroid onto the surface on the young Moon would have created a larger crater in a region where the crust's temperature is heightened by radioactivity (right) than it would in a region at normal temperature (left).
.
When the Soviet probe Luna 3 sent back the first shots of the dark side of the Moon, they showed that it was noticeably more pockmarked by craters than the near side. The nearside crust, by contrast, had more large, shallow basins. More than 50 years after those images first baffled researchers, a study published today in Science1 explains the observations.
Some theories suggest that the large basins on the near side were caused by impacts from asteroids bigger than those that caused the craters on the far side. But the latest study suggests that the observed basins do not accurately reflect the size of the initial impact, because as asteroids battered the lunar surface in the early history of the Solar System, the Moon's warmer and softer nearside crust melted like butter, producing giant lava flows that filled the impact craters and transformed them into basins.
To improve on previous estimates of the size and distribution of basins, the team behind the study used data from NASA’s Gravity Recovery and Interior Laboratory mission (GRAIL), two satellites that since 2011 have been orbiting the Moon and mapping subtle variations in the strength of its gravitational field. Basins are characterized by thinner crust, says first author Katarina Miljković, a planetary scientist at the Paris Institute of Earth Physics. The team used GRAIL's gravity maps2 to find such thin crust and measure the true size of the basins.
“We didn’t have to look at topography nearly at all, just at the crust thickness,” says Miljković. The researchers found that although both sides of the Moon had the same total number of impact craters, the near side had eight basins larger than 320 kilometres in diameter, whereas the far side had only one.
Hot hit
The asteroid bombardment should have battered both sides equally, Miljković points out. The asymmetry could have arisen from comparatively small objects punching above their weight on the near side, producing basins more easily than on the far side.
Simulations showed that if the largest dark area on the near side — the plain of volcanic rock known as Oceanus Procellarum — was hundreds of degrees hotter than crust on the far side, impacts there would produce basins up to twice as large as impacts from similar-sized bodies on the far side (see video above).
And indeed, around 4 billion years ago, or 500 million years after the Moon formed, the near side could have been warmer than the far side. Researchers looking at the near side have detected the presence of radioactive isotopes; their decay would have heated up the rock, explains study co-author Maria Zuber, a planetary scientist at the Massachusetts Institute of Technology in Cambridge and principal investigator of GRAIL.
The findings fit well with the observations, but “there is no consensus” as to what caused the startling asymmetry in isotope content between the near side and the far side, says Jeffrey Taylor, a lunar scientist at the University of Hawaii in Honolulu. One leading theory posits that material rich in radioactive elements rose in a gigantic volcanic plume and formed a magma basin; another that it came from a collision with a sister moon around 1,000 kilometres in diameter.
William Bottke, a lunar scientist at the Southwest Research Institute in Boulder, Colorado, says that the work could lead researchers to revise just how dramatic asteroid bombardments were in the early Solar System. "This can be used to more accurately derive what the small-body populations were like four billion years ago.”
Quelle: Nature
« Zum vorherigen Eintrag Zum nächsten Eintrag »
3648 Views
Created with page4