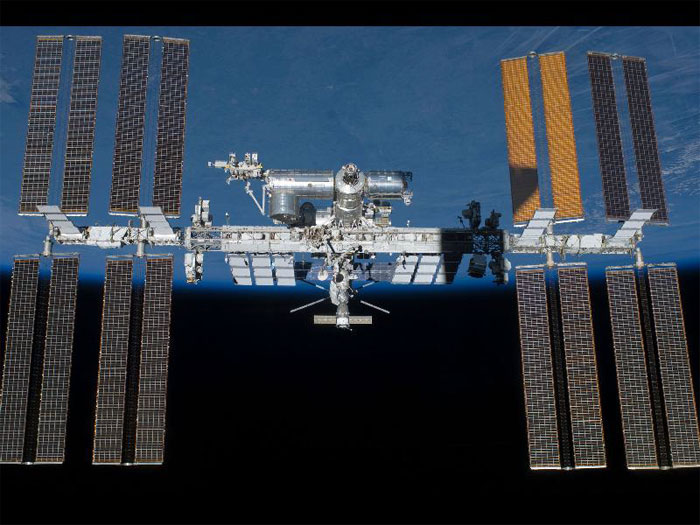 .
NASA TV to Air Russian Spacewalk Featuring the Olympic Torch
.
Two Russian cosmonauts will carry the Olympic torch when they venture outside the International Space Station Saturday, Nov. 9, for a six-hour spacewalk to perform maintenance work on the orbiting laboratory.
NASA Television will provide live coverage of the spacewalk beginning at 9 a.m. EST.
Expedition 37 Flight Engineers Oleg Kotov and Sergey Ryazanskiy of the Russian Federal Space Agency (Roscosmos) will open the hatch to the Pirs docking compartment airlock at 9:30 a.m. and float outside for a brief photo opportunity with the unlit torch. They then will stow it back inside the airlock before they begin their chores 260 miles above Earth.
The torch, an icon of international cooperation through sports competition, arrived at the space station Thursday aboard a Soyuz spacecraft carrying three crew members Mikhail Tyurin of Roscosmos, Rick Mastracchio of NASA and Koichi Wakata of the Japan Aerospace Exploration Agency. It will return to Earth on Sunday, Nov. 10, aboard another Soyuz spacecraft vehicle along with crew members Fyodor Yurchikhin of Roscosmos, Karen Nyberg of NASA, and Luca Parmitano of the European Space Agency.
The spacewalk is a high-flying extension of a relay that began in Olympia, Greece, in October. The relay will culminate with the torch being used to light the Olympic flame at the Feb. 7 opening ceremonies of the 2014 Winter Olympic Games in Sochi, Russia.
After the photo opportunity, Kotov and Ryazanskiy will prepare a pointing platform on the hull of the station's Zvezda service module for the installation of a high resolution camera system in December, relocate of a foot restraint for use on future spacewalks and deactivate an experiment package.
The spacewalk will be the 174th in support of space station assembly and maintenance, the fourth in Kotov's career and the first for Ryazanskiy. This will be the eighth spacewalk conducted at the station this year. In December, Tyurin will accompany Kotov on his fifth spacewalk.
. 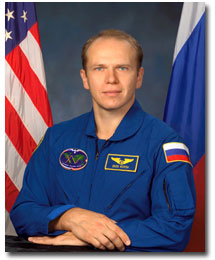 KOTOV OLEG VALERIEVICH
SOYUZ TMA COMMANDER
ISS 22 FLIGHT ENGINEER, ISS 23 COMMANDER
AIR FORCE COLONEL
INSTRUCTOR-TEST-COSMONAUT OF YU.A. GAGARIN COSMONAUT TRAINING CENTER
100TH RUSSIAN COSMONAUT, 452ND WORLD COSMONAUT
PERSONAL DATA: Born October 27, 1965, in Simferopol. Married to Svetlana Nikolayevna Kotova (previously, Bunyakina). They have two children, daughter Valeria, born in 1994, and son Dmitry, born in 2002. His parents, Valeri Efimovich and Elena Ivanovna Kotov, reside in Moscow.
EDUCATION: In 1982 Dr. Kotov finished high school in Moscow and entered the Kirov Military Medical Academy, from which he graduated in 1988. From November 1988 to December 1990 studied functional diagnostics/methods of pilot selection at the Central Air Force Hospital. In 1992 graduated from the Moscow Institute of Industrial property and innovation with a degree in patenting. In 1996 entered the Kachin Air Force pilot school named after A.F. Myasnikov from which he graduated in 1998 with a qualification of pilot-engineer.
EXPERIENCE: After graduation from the Academy, in 1988, he served at the Gagarin Cosmonaut Training Center, where he held the positions of Deputy lead test-doctor and Lead test doctor.
During his service he dealt with problems of altitude physiology and space flight effects on human body. He gained great experience in practical training and medical support of EVAs on the Mir station; he was a crew instructor for biomedical training and science program training. He is a certified SCUBA diver.
He was selected as a GCTC cosmonaut candidate in 1996. From June 1996 – March 1998, he completed a course of basic training for spaceflight. In March 1998, he received a test-cosmonaut qualification.
Since July of 1998, Dr. Kotov is a cosmonaut-researcher of the GCTC Cosmonaut Corps.
In May-August 1998, Kotov was trained for a flight on the Soyuz and the Mir station as a backup crewmember to the Mir-26 mission.
In October of 1998 started advanced training for ISS flights.
In December, 1999 received a test-cosmonaut qualification.
From October, 2002 to March, 2003 trained in the Taxi-5 backup crew with P. Vinogradov as Soyuz TMA commander.
From February, 2004 to October, 2005 trained as ISS-13 backup flight engineer and Soyuz TMA commander. After the Columbia accident and transition to a two-person ISS crew, Kotov was removed from the crew in October 2005.
In January, 2006 started training for the ISS-15 prime mission.
SPACEFLIGHT EXPERIENCE: Kotov completed his 1st spaceflight from April to October 2007 (196 days) as Soyuz TMA commander and ISS-15 flight engineer. He performed two EVAs that lasted a total of 11 hours and 47 minutes.
Kotov performed his 2nd spaceflight as Soyuz TMA commander and ISS 22/23 crewmember (ISS 23 commander) with Soichi Noguchi (JAXA) and TJ Creamer (NASA) from December 21, 2009 to June 2, 2010 (163 days). During this flight he performed an EVA that lasted for 5 hours and 44 minutes.
.

SERGEY NIKOLAEVICH RYAZANSKIY
SOYUZ TMA-M FLIGHT ENGINEER
ISS FLIGHT ENGINEER
TEST COSMONAUTOF ROSKOSMOS (RUSSIA)
NO SPACEFLIGHT EXPERIENCE
BIRTHDATE AND BIRTHPLACE:Born 14 November, 1974 in Moscow.
PERSONAL DATA: Ryazansky is married. There are three children in the family. His parents,
Tatyana Yuryevna and Nikolay Mikhailovich Ryazansky, reside in Moscow.
EDUCATION: In 1991 graduated from school # 520 in Moscow and entered the Moscow State University, which he graduated from in 1996 as a biochemist.
In 2000 he graduated from the post-graduate course of the Russian Federation State Science Center at the Institute of Biomedical Problems of the Russian Academy of Sciences.
In 2006 he presented a Ph.D. thesis in biology, specializing in physiology and aerospace/naval medicine, his work entitled “Particular features of autokinetic motion in microgravity”.
EXPERIENCE: Upon graduation from the Moscow State University from July 1996 to February 2003 he was working at the Institute of Biomedical Problems as a junior scientist, scientist and senior scientists. He mostly specialized in development and testing means of preventive measures to microgravity adverse impact.
SPACEFLIGHT TRAINING: In June 2003 he was selected as a cosmonaut candidate of the IBMP Cosmonaut Corps. From June 2003 to July 2005 he was taking basic training at the GCTC. Following  successful evaluation he was certified as a cosmonaut-researcher.
From March 2007 to September 2011 he was taking advanced training at GCTC.
In spring of 2009 S. Ryazansky was a crew commander of a 105-day-long isolation experiment in the framework of the Mars-500 Project.
In November 2010 the Interdepartmental Certification Board certified him as a test cosmonaut.
Since December 2010 he is a test cosmonaut of the GCTC Cosmonaut Corps.
He is assigned to the E35/36 Backup Crew and since September 2011 takes training as the Soyuz TMA-M and ISS Flight Engineer.
HONORARY AWARDS: He is an honoured space hardware test engineer. Is awarded with   Yu. A.Gagarin and M.S. Ryazansky medals of Russian Federation of Cosmonautics. Has NASA certificate for personal contribution to the Bion-11 International Project and a diploma for significant contribution to the SFINCSS International 240-day-long spaceflight simulation experiment.
.
Quelle: NASA
« Zum vorherigen Eintrag Zum nächsten Eintrag »
3626 Views
Created with page4