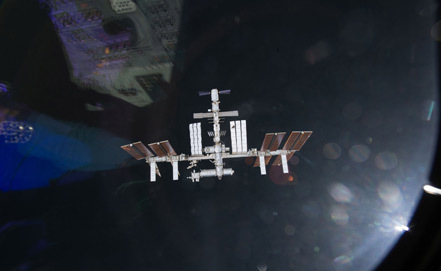 “The engines of the cargo freighter were activated at 23:22 Moscow time (19:22 GMT) and have been running for 815 seconds,” Roscosmos said.

“The altitude of the orbital station increased by about 3,400 kilometres and the average ISS altitude makes 418.2 kilometres now,” Roscosmos noted.

The manoeuvres to adjust the ISS orbit are usually made to put the station on the required orbit for the docking with a cargo or piloted spacecraft and provide conditions for a successful landing as well as deviation from the space garbage. The ISS orbit’s altitude goes down by 150-200 kilometres daily under the impact of the force of gravity and other factors.

Details on tomorrow's planned reboost for the ISS – the final one in the ATV-4 mission – from ESA's Thomas Beck at ATV-CC.

The reboost on Thursday [24.10] is planned to generate a modest delta-V (change in speed) of about 0.6 m/sec and to use approximately 85 kg of fuel.

The corresponding small increase in ISS altitude should be on the order of a bit less than 2 kilometres. The back-up date for this reboost is Saturday, 26 October.

I will provide more up-to-date figures after reboost termination. 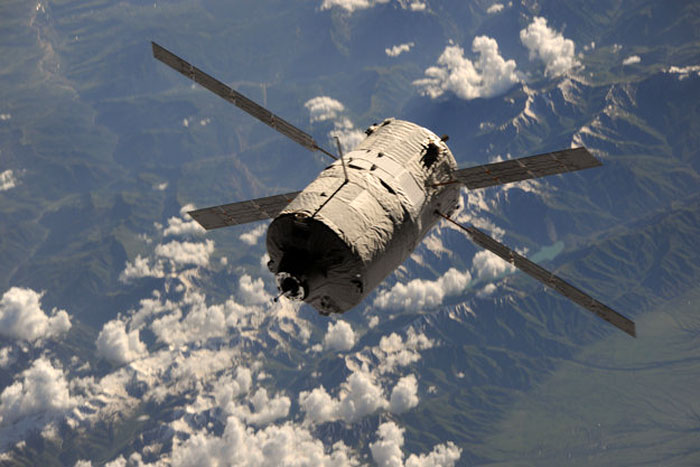 .
ESA’s supply and support ferry ATV Albert Einstein has served the International Space Station faithfully since it was launched from Europe’s spaceport in French Guiana in June. Its mission comes to an end next week when it undocks on Monday and enters Earth’s atmosphere five days later.
Albert Einstein is the fourth in the series of ESA’s Automated Transfer Vehicles that delivers supplies to the Station, reboosts its orbit and frees up space on the orbital outpost when it undocks with waste.
This year, the ATV team has planned a special departure. After undocking at 09:00 GMT on 28 October, Albert Einstein will be instructed by ATV Control Centre in Toulouse, France to perform delicate manoeuvres over the course of five days to position itself directly below the Station.
Controllers will start the reentry procedure around noon GMT 2 November when ATV-4 is 120 km below the Station – so astronauts will observe the craft from above as it disintegrates over the Pacific Ocean. This procedure will provide valuable information to calibrate future spacecraft reentries.
“This mission has gone without a hitch and is an excellent performance by the operations team at the control centre and our industrial partners that built the machine,” says ATV-4’s mission manager, Alberto Novelli.
“To close the mission with such a delicate but spectacular operation is a fitting end to all the hard work of the people involved,” adds Jean-Michel Bois, heading the operations team at the control centre.
ATV-4 is the heaviest payload ever launched by an Ariane rocket. The vessel also carried the most cargo by weight as well as the most individual items ever in the ATV series.
The record-breaking craft has one more achievement up its sleeve: it will leave the Station packed with the largest amount of waste ever.
Quelle: ESA
.
. 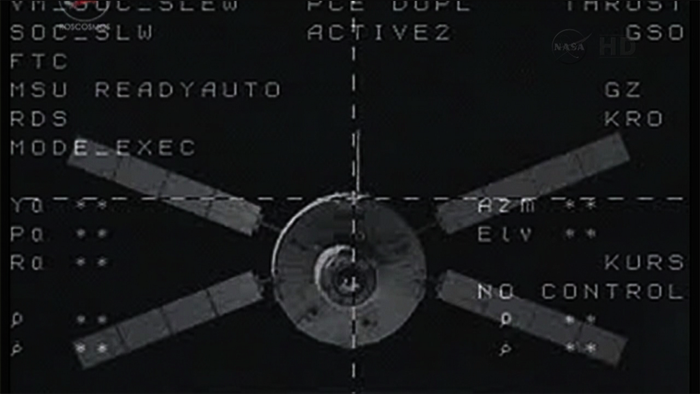 ATV4 undocks from #ISS at 4:55am EDT, setting stage for Soyuz relocation Friday.
Quelle: NASA
.
The Expedition 37 crew on board the ISS said goodbye to ATV Albert Einstein on 28 October 2013, with separation taking place at 09:55 CET.
The ATV-4 undocking was controlled by the joint ESA/CNES mission operations team at the ATV Control Centre, Toulouse, France. A controlled, destructive re-entry is planned for 2 November.
. 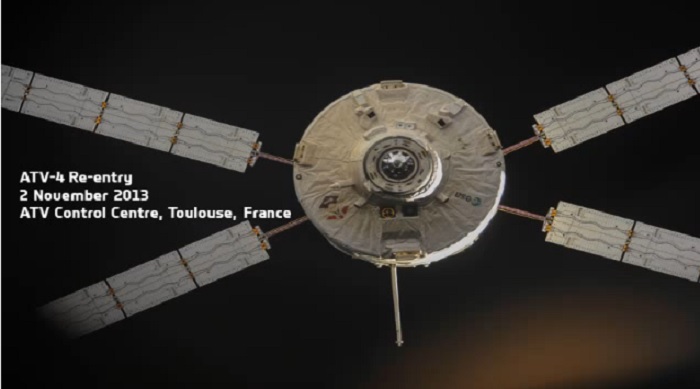 ESA’s fourth Automated Transfer Vehicle cargo ferry,Albert Einstein, completed its five-month mission to the International Space Station by reentering the atmosphere today and burning up safely over an uninhabited area of the southern Pacific Ocean.

Automated Transfer Vehicles (ATVs) are the most complex space vehicles ever developed in Europe and are the largest and most capable resupply ships to dock with the Space Station.

At 20 tonnes, ATV-4 set the record for the heaviest Ariane 5 launch when its mission started from Europe’s Spaceport in French Guiana on 5 June, docking with the Station 10 days later. The record cargo of 2480 kg included more than 1400 individual items.

Albert Einstein delivered important cargo to keep the Station operating and to allow the six astronauts on the orbital outpost to perform out-of-this-world experiments.

ESA astronaut Luca Parmitano oversaw the automated docking and was responsible for unloading and storing all the scientific equipment, spare parts, supplies, clothes and food.

A small selection of ATV-4’s cargo includes experiments on emulsions that will help industry to create foods and pharmaceuticals with longer shelf-lives, a replacement water pump for Europe’s Columbus laboratory, a new water recycler for NASA, a GPS antenna for Japan’s Kibo laboratory and 3D-printed space toolboxes.

While docked, ATV-4 performed six reboosts to keep the Space Station in orbit, counteracting the effects of atmospheric drag. Without reboosts by ATV and Russia’s smaller Progress vehicles, the Station would eventually fall back to Earth.

Before its departure, astronauts loaded its pressurised module with waste material, freeing up space on the Station. After setting records going up, ATV-4 also set records on its descent: it had the most waste material loaded for the series.

The European ferry undocked on 28 October at 08:55 GMT (09:55 CET) and manoeuvred itself into a safe reentry trajectory about 100 km below the Station.

Albert Einstein performed a series of delicate manoeuvres to reenter below the Station in order for the astronauts to observe the spacecraft’s fragmentation in the upper atmosphere, providing unique information on reentry physics.

ATVs perform all their manoeuvres, including their autonomous dockings, under close surveillance by their control centre in Toulouse, France, run jointly by ESA and France’s CNES space agency.

“The mission went perfectly, which for me and the ATV team or any space mission is a great thing,” says Alberto Novelli, ATV-4 mission manager.

“The smooth running of this fourth mission shows the maturity of the ATV programme and puts ESA’s successful track record on the map for future projects.”

The next spacecraft in the series, ATVGeorges Lemaître, has already arrived by boat at the European spaceport in French Guiana. Loading cargo into the pressurised module will start in March next year. ATV-5’s moduleswill then be combined and placed on its Ariane launcher for launch at the end of June.

With the series of five ATV space vehicles, ESA will have paid its dues for using the Station through to the end of 2017.

ESA is contributing a significant share of the maintenance of the Station to cover the costs related operating its own elements – the Columbus laboratory and its set of experiments and related science equipment – as well as to the regular flights of its astronauts.

About the European Space Agency

The European Space Agency (ESA) is Europe’s gateway to space. It is an intergovernmental organisation, created in 1975, with the mission to shape the development of Europe’s space capability and ensure that investment in space delivers benefits to the citizens of Europe and the world.

ESA is also working actively with the EU on implementing the Galileo and Copernicus programmes.

By coordinating the financial and intellectual resources of its members, ESA can undertake programmes and activities far beyond the scope of any single European country.

ESA develops the launchers, spacecraft and ground facilities needed to keep Europe at the forefront of global space activities.

Today, it launches satellites for Earth observation, navigation, telecommunications and astronomy, sends probes to the far reaches of the Solar System and cooperates in the human exploration of space. 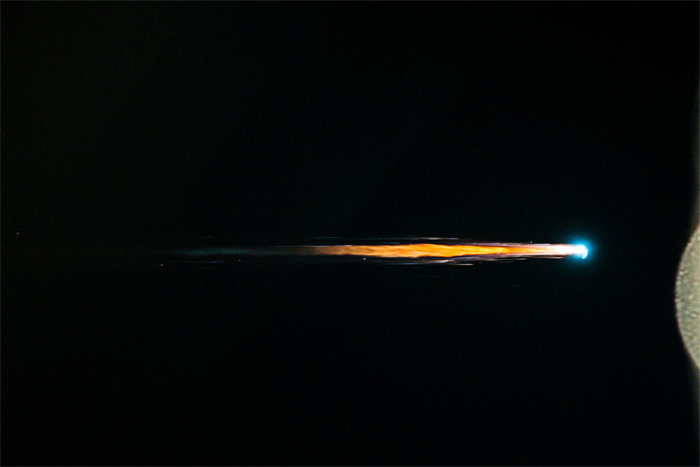 ESA’s fourth Automated Transfer Vehicle,Albert Einstein,burnt up on 2 November at 12:04 GMT over an uninhabited area of the Pacific Ocean. It left the International Space Station a week earlier with 1.6 tonnes of waste after spending five months attached to the orbital outpost.
Each ATV mission ends with the spacecraft burning up harmlessly in the atmosphere. This time, however, the ATV team organised a special departure to gain valuable data on reentries.
After undocking at 09:00 GMT on 28 October,Albert Einsteinwas instructed by its control centre in Toulouse, France to perform delicate manoeuvres over the course of five days to position itself directly below the Station. Astronauts on the Station observed the vessel from above as it disintegrated.
This image from the Station was taken whenAlbert Einsteinwas around 100 km directly below and had began its destructive dive. It is the first view of an ATV reentry since the first, of Jules Verne, in 2008.
ATVAlbert Einsteindelivered 7 tonnes of supplies, propellant and experiments to the Space Station. ESA astronaut Luca Parmitano oversaw the unloading and cataloguing of the cargo, comprising over 1400 individual items.
.