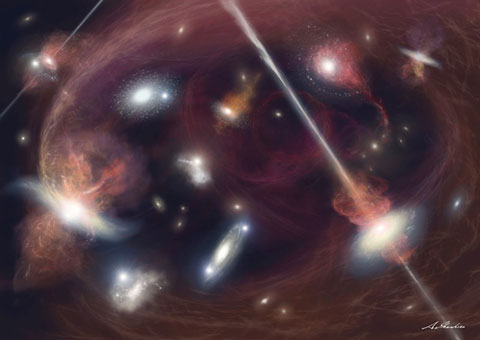 [Fig.1] Ten to twelve billion years ago, the universe was undergoing a turbulent youth. Stars formed at very high rates, but many of the newborn stars died quickly in huge supernova explosions. These explosions produced the chemical elements - the building blocks of other stars, planets, and life.In the same period, black holes in the centers of galaxies were devouring large amounts of the surrounding gas, producing strong jets and outflows. The combined energy of supernovae and black hole activity created powerful galactic winds that blew the iron out of the galaxies, into intergalactic space.
[Image Credit: Akihiro Ikeshita]

New evidence of heavy elements spread evenly between the galaxies of the giant Perseus cluster supports the theory that the universe underwent a turbulent and violent youth more than 10 billion years ago. That explosive period was responsible for seeding the cosmos with the heavy elements central to life itself.

This discovery, reported today in the journal Nature by a team of researchers from the Kavli Institute for Particle Astrophysics and Cosmology (KIPAC) and the Japan Aerospace Exploration Agency (JAXA), was made possible by almost two weeks of observations of the nearby Perseus cluster of galaxies with the Suzaku satellite. The Suzaku Key Project observations were used to map the spectroscopic signature of iron in the hot, 10 million degree gas that fills the space between galaxies in clusters.

"We saw that iron is spread out between the galaxies remarkably smoothly,"
said Norbert Werner, lead author of the paper. "That means it had to be present in the intergalactic gas before the Perseus cluster formed."

Most of the elements that we are made of were produced inside stars and released by stellar explosions called supernovae. Whether the elements formed by stars stay within the galaxies they are born in, or are spread out into intergalactic space, had long been an open question. If the elements stay within their original host galaxies then we would expect to see an uneven distribution of iron within galaxy clusters, roughly following the distribution of galaxies. But what Werner and his colleagues saw is a remarkably even distribution of iron all the way out to the edge of the Perseus cluster. According to the authors, this can only be explained if the iron had been spread out into the intergalactic medium before the cluster formed, roughly 10 billion years ago, during a time of intense star formation.

At that time, billions of exploding stars created vast quantities of heavy elements in the alchemical furnaces of their own destruction. This was also the epoch when black holes in the hearts of galaxies were at their most energetic.

"The combined energy of these cosmic phenomena must have been strong enough to expel most of the metals from the galaxies at early times, and to enrich and mix the intergalactic gas." said co-author and KIPAC graduate student Ondrej Urban.

"The results suggest that the Perseus cluster is probably not unique, and that iron - along with other heavy elements - is evenly spread throughout all massive galaxy clusters", said Steven Allen, a KIPAC professor and head of the research team.

"You are older than you think - or at least, some of the iron in your blood is older, formed in galaxies millions of lights years away and billions of years ago," concluded co-author Aurora Simionescu, an International Top Young Fellow at the Japanese Space Agency.

The researchers are now looking for iron in other clusters and eagerly awaiting a mission capable of measuring the concentration of chemical elements in the hot gas with a much higher accuracy.

"With measurements like these, the Suzaku satellite is having a profound impact on our understanding of how the largest structures in our universe grow," Allen said. "We're really looking forward to to what further data from Suzaku and the new ASTRO-H satellite will tell us." 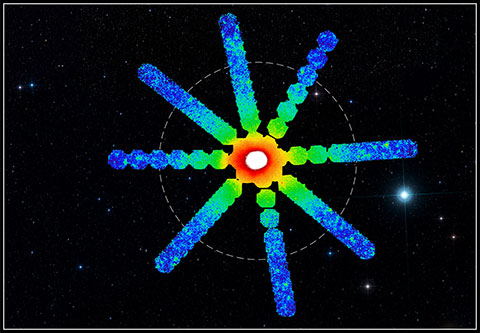 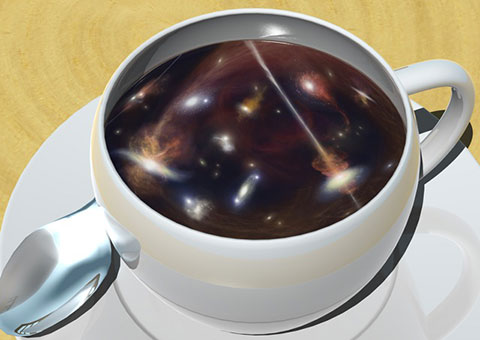 [Fig.3] Young stars, exploding supernovae, and voraciously feeding black holes produced powerful winds 10-12 billion years ago. These winds were the spoon that lifted the iron from the galaxies and mixed it with the intergalactic gas.
[Image Credit: Akihiro Ikeshita/JAXA]