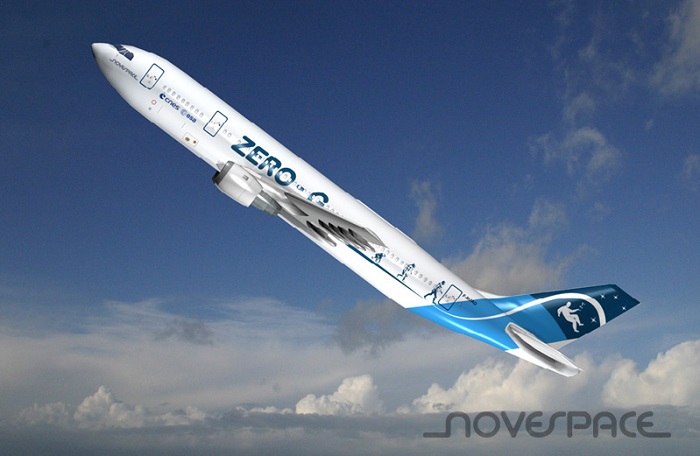 A subsidiary of CNES (French Spatial Study National Center), Novespace was established in 1986 for the purpose of promoting micro-weightlessness as a tool for scientific experimentation.

After more than 50 programmes of parabolic flights carried out from 1988 to 1996 on board the Caravelle Zero G, Novespace took the Airbus A300 ZERO-G into service, which the company owns.

Based at the Bordeaux-Mérignac airport zone, the company organizes an average of six parabolic flight programmes annually, principally for the account of space agencies (CNES, ESA, DLR, JAXA, etc.) within the framework of their scientific and technological research programmes. The company also uses the A300 ZERO-G for missions for observing atmospheric re-entry of the Cryotechnic Main Stage (CMS) of the Ariane 5 rocket.

Novespace has carried out 100 parabolic flight programmes on board the A300 ZERO-G, with the 100th programme taking place from 3 to 14 December 2012, being more than 11 500 parabolas and 70 hours of accumulated weightlessness."With more than 3000 parabola to my credit, I live each one with the same enchantment as the first one, more than 25 years ago.

The total loss of sensation of weight remains a magical experience, incomprehensible by the body. It systematically recalls the insertion to orbit of the space shuttle when it cuts off its ascent main engines.
I am very pleased that one of the spectacular components of space flight – weightlessness – is now accessible to non-professionals thanks to the Air Zero G flights.

For those who will discover it, it will upset all concepts of weight and lightness. These new feelings are so strange and unique that they will remain engraved for life.

Astronauts for one day, they will better understand why so many science disciplines are interested in space."


For ten years, Novespace has been organizing parabolic flight campaigns on board the A300 ZERO-G for international space agencies (CNES, ESA, DLR, JAXA) for technological investigation and scientific research.

What are parabolic flights?

Parabolic flights are performed onboard aircrafts following a flight pattern which alternates ascents and descents with short level flight breaks.
Each of those manoeuvres, called parabolas, provide up to 22 seconds of reduced gravity or weightlessness.
During those reduced gravity phases, researchers flying onboard the aircraft perform experiments and collect data with conditions impossible to simulate on Earth.

What are the advantages of parabolic flights?

Parabolic flights offer advantages unique to this platform:
- Tests of systems in preparation for long-duration Space missions
- Biomedical research experiments on human test subjects in weightlessness
- Ideal environment for new experiments
- Tests of experiments in critical design phases
- Low cost of design and production of an experiment
- Possibility to carry out several series of experiments during three consecutive days
- Possibility to use standard laboratory equipment
- Researchers interact directly on their experiment during flight
. 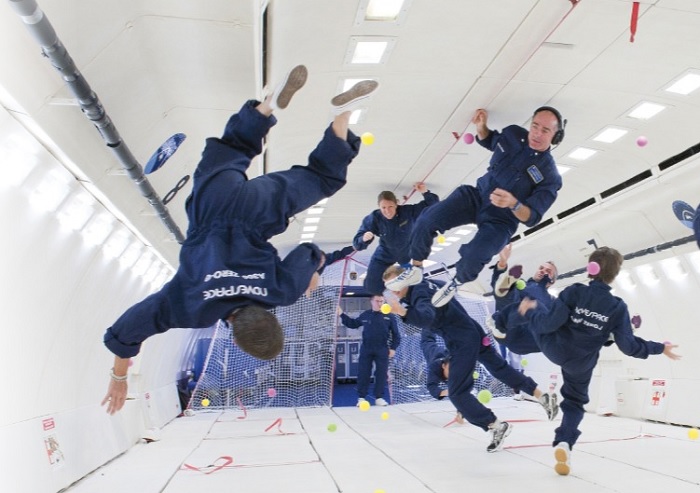 We need to dare … to dare to experience weightlessness in parabolic flight! So, for a moment which is long enough to make its impression on every cell in your body, an experience you will always remember you will have known a truly extraterrestrial state of being.

Yes, there is a way to live this sensation (or, should I say, this absence of sensation), without having to take your place in a rocket about to blast off into outer space.

All you need to do is board one of these few aircraft in the world which is specially designed for this type of flight. Those who have had this experience – and there are plenty of them; some tens of thousands of people have already done it, compared with the few more than five hundred men and women who to date have travelled into outer space – remember it as a truly unique experience, something they will remember for the rest of their lives. And they all dream of living the dream again.

Everyone discovers weightlessness to be the same strange and unforgettable sensation of lightness of being, the total absence of weight. The temptation to play is irresistible. It seizes the imagination, because suddenly all kinds of contortions of the body become possible which would be unthinkable on Earth. You cannot stop yourself displaying your emotions, sharing them with those around you. You seek to understand; how can you become weightless without leaving the atmosphere? It is so alien to the experience of life on our planet that parabolic flight can easily lead you to believe that you have indeed become an extraterrestrial, or even that your body has been taken from you.

And yet all this is entirely without danger, without any consequence other than the experience being engraved on your memory, the recollection of this amazing escape from earth's gravity.
You can live the dream, with no anxiety at all. The unknown which awaits you is simply the pure joy of discovery.

With more than 3 000 parabolas to my score, I personally experience every one of them with the same sense of excitement and enchantment as the first, more than twenty five years ago. The transition between the sensation of excess weight which is necessarily produced when bringing the nose of the aircraft up into its skywards trajectory, then the total disappearance of the sensation of weight, continues to be a magical moment for me, something the body cannot understand, which always reminds me of the space shuttle entering orbit when the launch engines are shut down.

There has never been a parabolic flight in the course of which I have not found myself, for a moment, sitting on the ceiling and looking down at the cabin turned upside down. I always take a tennis ball with me, because of the fascination caused by its behaviour in flight. During the initial phase, when the ball is tossed upwards, it falls so rapidly that you think you are watching a film which has been speeded up. Then, during the transition, the “film” becomes slow motion. In zero gravity, weightlessness, I let the ball go just by withdrawing my fingers, and it stays motionless in front of me, the only thing to remind me that I'm not dreaming.

All movements, even the simplest, must be reinvented. One day there will have to be an Olympiad in zero gravity.

Think about this for your next Air Zero G flight, and decide on the activity you do best. You will be amazed at how easily a human being can adapt to this outer space environment. And you will also realise the potential for discovery offered by research in microgravity.
.

For those missions, an airborne radar system is mounted on the Airbus A300 ZERO-G: two antennas are attached on the front right cargo door and seven instrument racks and a CCD camera are installed in the cabin.
Sogerma Services was in charge of those modifications and also provides aircraft support during these observation missions. The objective of those missions is to characterize very accurately the atmospheric reentry of the Space object in order to validate and refine ground impact prediction models.
The American company System Planning Corporation designed and operates the radar system during those observation missions. ONERA is currently designing an onboard infrared observation system.
.

Novespace has already performed three observation missions for the reentry of the main cryogenic stage (EPC) of Ariane 5 launcher, in the framework of ARTA (Accompaniment in Research and Technology for Ariane 5) program of ESA, with the support of CNES Launch Vehicles Directorate.

During two missions performed from the West coast of Mexico, the reentry of EPC was observed above the Pacific Ocean. One of this mission was carried out during the lauch of Rosetta interplanetary probe.
Another mission was carried out from the West coast of Africa in order to observe the reentry of EPC above the Atlantic Ocean.
.