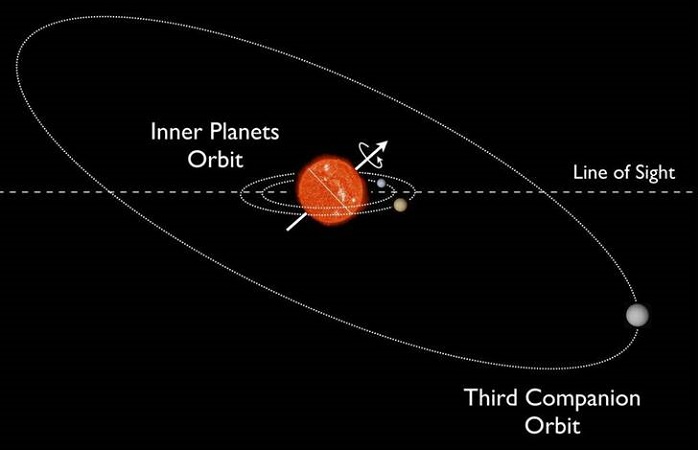 Observations from NASA's Kepler spacecraft have uncovered a 'tilted' solar system, a finding that gives clues as to how some planets come to orbit their stars on paths that are misaligned with the stars' equators, astronomers report today in Science1.

The planets of Earth's Solar System formed from a flat disc of gas and dust revolving around the Sun's equator, so they all started out in nearly the same plane. Earth’s orbit makes an angle of just 7.2 degrees with the plane of the Sun’s equator.

Five years ago, however, astronomers were shocked to find planets orbiting at steep angles to their stars’ equators2. Some planets even went around their suns backwards — they orbit in the opposite direction to the star’s rotation3. But no one had seen a misaligned multiplanetary solar system until now.

For the latest study, astronomer Daniel Huber of NASA’s Ames Research Center in Moffett Field, California, and his colleagues looked at Kepler-56, a star roughly 860 parsecs (2,800 light years) from Earth. It has two large planets that lie in the same plane4 and circle closer to their sun than Mercury does to ours. Kepler detected the planets as they blocked the star's light, so their orbits are oriented edge-on to our line of sight.

Kepler-56 is a giant star that's four times larger than the Sun and emits nine times more light. To determine the star’s orientation, researchers used Kepler to study variations in its brightness, which arise from the star's vibrations and look different depending on whether the star is viewed equator-on, pole-on or somewhere in between.

The observations revealed that the plane of the star's equator tilts 45 degrees to the planets’ orbits. “It was a big surprise,” Huber says.

To find out what caused the tilting, the astronomers measured the velocity of Kepler-56 through space using the 10-metre Keck I telescope on Mauna Kea in Hawaii. “That revealed the culprit,” Huber says: a distant body whose gravitational pull tugs the star and also tilts the planets’ orbits. Despite the enormous tilt, the planets' orbits stay aligned with each other because they're in resonance: one planet takes twice as long as the other to circle the star, so they periodically nudge each other through their gravity. Their orbits therefore remain co-planar even as they deviate radically from the star's equator.

“It’s a fascinating discovery,” says Amaury Triaud, an astronomer at the Massachusetts Institute of Technology in Cambridge. “It’s nature: you observe, and you find extraordinary stuff.”