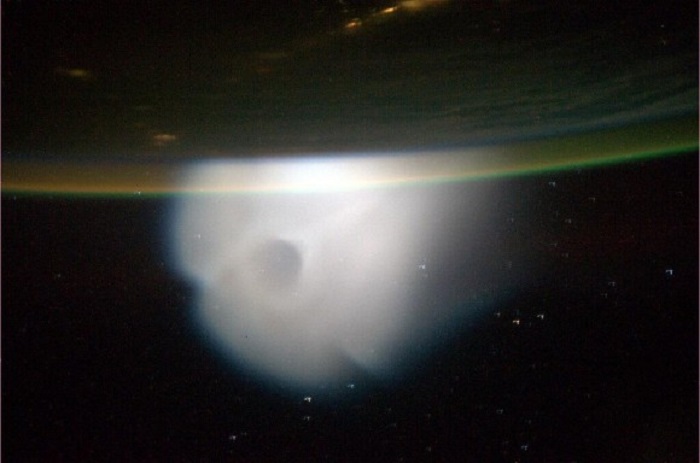 The astronauts on board the International Space Station saw a strange and unexpected view out their windows yesterday. “Saw something launch into space today. Not sure what it was but the cloud it left behind was pretty amazing,” tweeted NASA astronaut Mike Hopkins.

ESA astronaut Luca Parmitano also got a shot of the cloud, as well as another picture of a contrail left from the launch.So what launched into space? Of course, there was no launch from NASA because of the government shutdown, and I couldn’t find any other launches on the docket anywhere else, so I checked in with Robert Christy at the Zarya.info website, who usually knows of everything going up (or down) in space. 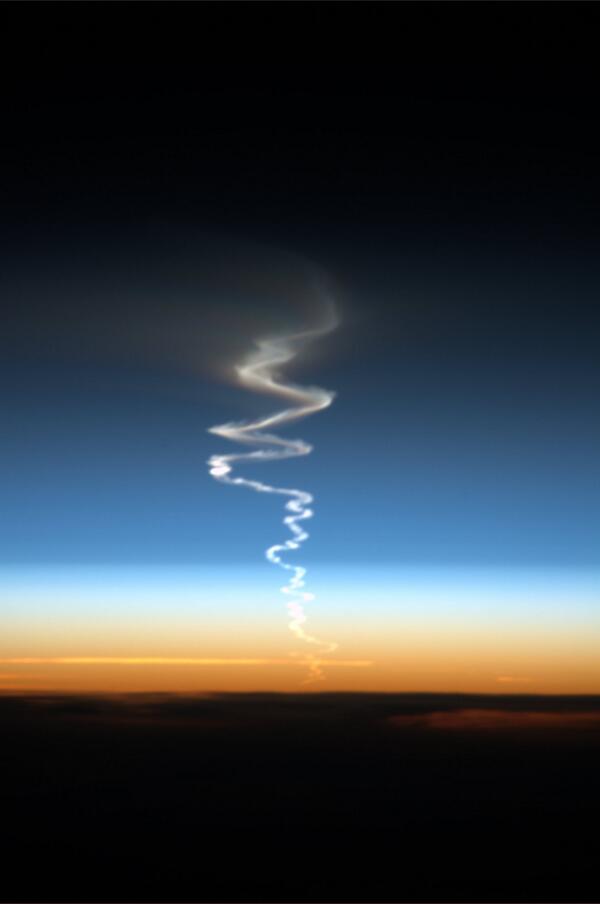 “Without precise date, time and location it’s not possible to say for sure,” Christy replied, “I believe there was a missile launch from Kapustin Yar (Kazakhstan) on October 10 so if the photo was taken over the Eastern Europe or central Asia region than that might be what he saw.”

Doing a search for that, I found a notation on the RussianForces website that said:

Strategic Rocket Forces carried out a successful test launch of a Topol/SS-25 missile on October 10, 2013. The missile was launched at 17:39 MSK (13:39 UTC) from Kapustin Yar to the Sary Shagan test site in Kazakhstan. According to a representative of the Rocket Forces, the test was used to confirm characteristics of the Topol missile, to test the systems of the Sary Shagan test site, and “to test new combat payload for intercontinental ballistic missiles.”

I had thought ICBM’s were a relic of the Cold War, but according to Wikipedia, “As of 2009, all five of the nations with permanent seats on the United Nations Security Council have operational long-range ballistic missile systems: all except China have operational submarine-launched missiles, and Russia, the United States and China also have land-based ICBMs (the US’ missiles are silo-based, China and Russia have both silo and road-mobile missiles).” Additionally, Israel launched an ICBM test in 2008, India test-fired one in 2012 and there was much speculation that a launch by North Korea in December 2012 to put a satellite into orbit was really a way to test an ICBM.

Parmitano also got an image of the cloud: 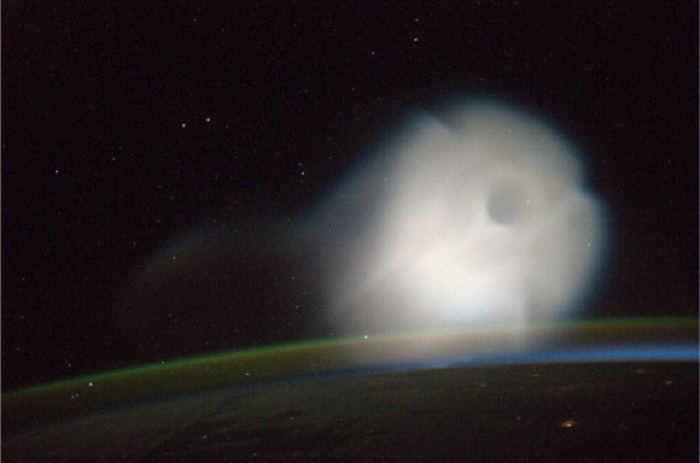 Another view of the cloud in space from the missile launch. Credit: ESA/Luca Parmitano.

“An immense cloud forms outside the atmosphere after the disintegration,” Parmitano said via Twitter.

Robert Christy noted that at the launch time noted by the RussianForces website, the ISS was over Iran, heading northeast towards Mongolia, and the Sun was about to set at Kapustin Yar.

“The view from the ISS would have been with a low sun angle, shining ‘over the photographer’s shoulder’ – hence the rather striking image against a darkish background with no glare from the Sun,” Christy told Universe Today via email.

Oh, the things you can see out your window in space!

.
Update: 15.10.2013
.
UFO reports from Russia and spooky pictures from the International Space Station have been traced to the same phenomenon: a Russian missile launch that took place last Thursday.
One of the spookiest things about the UFO sightings is that they were predicted in advance.
"Russia just test-fired a Topol ICBM from the Kapustin Yar range on the lower Volga, to the Shary Shagan impact zone in Kazakhstan," NBC News space analyst James Oberg reported Thursday on the Above Top Secret forum. "In the past, such launches have been seen over a wide area, as far away as Israel and Syria, and reported as UFOs. ... If the weather was clear, we might expect some spectacular videos to show up on YouTube and RUTube."
Sure enough, UFO sightings streamed in from Russia, accompanied by amazing videos of cometlike flare-ups.
.
Frams:

.
A UFO ("NLO") video from Yekaterinburg shows the glow from a missile test launch, flaring up in the sky and then dissipating into a briefly shining cloud.
.
But Oberg didn't predict that the blast would produce some eerie pictures from the space station as well: NASA astronaut Mike Hopkins and Italian astronaut Luca Parmitano both snapped pictures of a hazy space cloud with Earth's rim in the background. Parmitano even got a picture of the trail left behind by the Topol missile's ascent.
Bad Astronomy's Phil Plait has a bit of fun with the sighting, imagining it as a deleted scene from "Gravity." And it does make you think: The spooky, jellyfish-shaped cloud of gas from the Topol missile looks mighty close.
"The missile plume is not symmetric or evenly distributed," Oberg acknowledged in an email. "It seems to have some shape, even though it is composed of gas particles moving at perhaps 10,000 feet per second. They are visible because they are glowing hot, but also because they are in sunlight."
The shape reflects how the hot exhaust expanded as it left the rocket, with "four circumferential notches that must be a consequence of plume expansion from four nozzles, or of four steering vanes," Oberg said.
The rocket blast put on a good show for the shooters on the space station, but Oberg said the launch posed no hazard to the astronauts. "This wasn't anywhere near a 'Gravity' Hollywood space debris cascade-triggering possibility," he said. "Topol's altitude, even while thrusting, was far higher than the ISS's, but in terms of accidental collision, [the phrase] 'you can't get there from here' applies. It never went fast enough to catch up."
Some questions remain, however: What were the space station's three Russian cosmonauts doing while the Topol was being launched? Was the launch deliberately timed so they could observe the performance of the missile and its test warhead? Let the conspiracy theories begin ...
.
Quelle: NBC
.
Update: 17.10.2013
Weitere spektakuläre Aufnahmen der ISS-Crew von SS-25-Testflug
.

Meanwhile, a large set of images have been downloaded to the ground, showing a spectacular view of a Russian Topol/SS-25 missile that was launched by the Russian military on October 10.
The rocket was launched from Kapustin Yar with a target of passing over the Sary Shagan test site in Kazakhstan. The missile has a range of nearly 7,000 miles.
The hi-res images (a huge set available in L2 - from which the .gif was created) were captured from the ISS by Parmitano and fellow Expedition 37 crewmember Mike Hopkins, who tweeted at the time: “Saw something launch into space today. Not sure what it was but the cloud it left behind was pretty amazing.”
.
Und zum Abschluß gab´s noch AURORA-Nachschlag :
.