VIRGIN GALACTIC’S “YOUR FLIGHT DNA” EVENT BRINGS TOGETHER LARGEST NUMBER OF FUTURE ASTRONAUTS TO DATE
Customers from around the world celebrate impending start of commercial operations
MOJAVE, Calif. – Today, Virgin Galactic, the world’s first commercial spaceline owned by Sir Richard Branson’s Virgin Group and Abu Dhabi’s aabar Investments PJS, hosted its annual private customer event at Mojave Air and Space Port. Deemed, “Your Flight DNA,” the occasion brought together the largest number of future astronauts to date, with approximately 400 customers and a total of 640 individuals in attendance.
“As Virgin Galactic progresses towards commercial flight, we periodically gather together with our wonderful family of Virgin Galactic future astronauts, not only to thank them for their commitment to the program, but to also celebrate our most recent milestones and successes,” said Virgin Galactic Founder Sir Richard Branson who was on hand in Mojave for today’s event. “With supersonic powered test flights of SpaceShipTwo well underway, a full commercial service is fast approaching. In fact, today’s event could well be the last major gathering of future astronauts before we finally start to make their dreams of space travel a reality.”
Just outside Virgin Galactic’s Final Assembly Integration and Test Hangar (FAITH) facility in Mojave, WhiteKnightTwo and SpaceShipTwo (SS2) were on display for the crowd. Virgin Galactic’s Chief Pilot David Mackay and Pilots Frederick “C.J.” Sturckow and Michael Masucci participated in the morning’s events and will conduct a “Meet the Pilots” session in the afternoon.
During these yearly customer events, future astronauts are provided updates on the progress being made for the company’s space flight program. This morning, customers heard from top Virgin Galactic executives, including Sir Richard Branson, CEO George Whitesides, Commercial Director Stephen Attenborough, President Steve Isakowitz and Vice President of Operations Mike Moses. Future astronauts received up-to-date information on vehicle and rocket motor development, including a stunning showcase of SS2 cabin seat prototypes. They also had the chance to meet and mingle with the Virgin Galactic team.
“We want to give our customers the opportunity to meet the team behind the dream – our amazing group of engineers, rocket motor scientists, operations experts, pilots and more,” George Whitesides said. “These are the individuals who work to ensure that our customers will have the safest and most memorable flight experience possible.”
This year, Virgin Galactic focused on providing customers with a “behind the hangar doors” experience, which included updates on the recent work and program milestones that have taken place in Mojave, where Virgin Galactic flight tests and vehicle manufacturing takes place. Many of today’s presentations took place inside Virgin Galactic’s FAITH facility.
Throughout the remainder of the day, future astronauts will gather for additional presentations on medical evaluations, overall operations and the progress being made at Spaceport America in New Mexico. This evening, customers will attend a private Virgin Galactic party at the California Science Center in Los Angeles. As they celebrate in the midst of retired Space Shuttle Endeavour, future astronauts will hear from additional Virgin Galactic executives and have the opportunity to spend time with other fellow future astronauts.
. 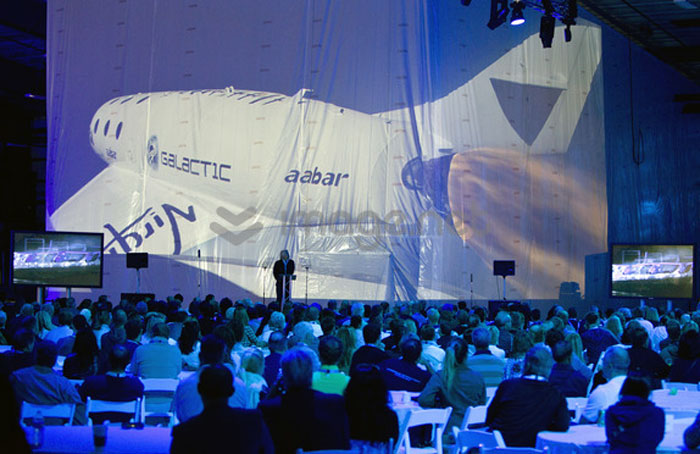 Sir Richard Branson speaks to a group of future astronauts at the FAITH Hangar of Virgin Galactic in Mojave, CA September 25, 2013 in Mojave, CA.
. 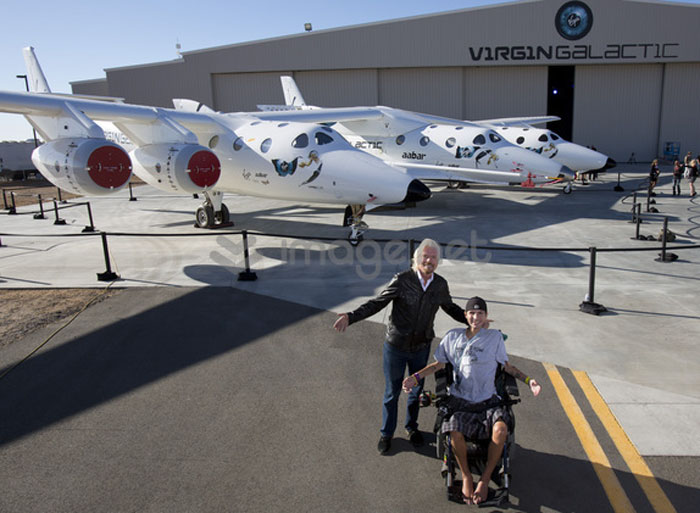 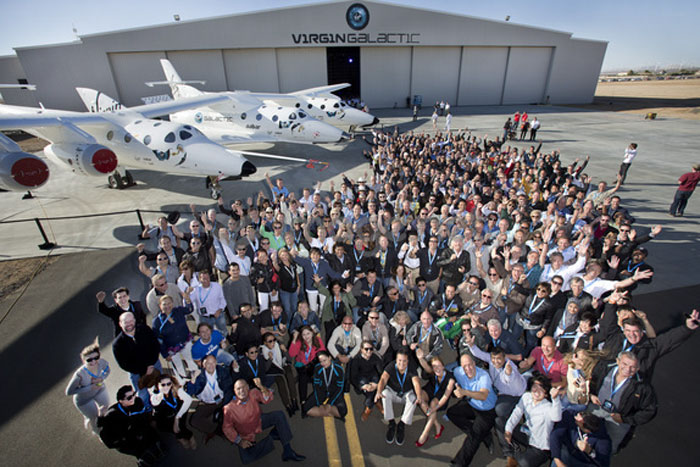 A majority of Virgin Galactic's future Astronauts gather with Sir Richard Branson (center) for a group photo at Virgin Galactic FAITH hangar in Mojave, CA September 25, 2013. AT side is the WhiteKnight2 mated with SpaceShip2.
.