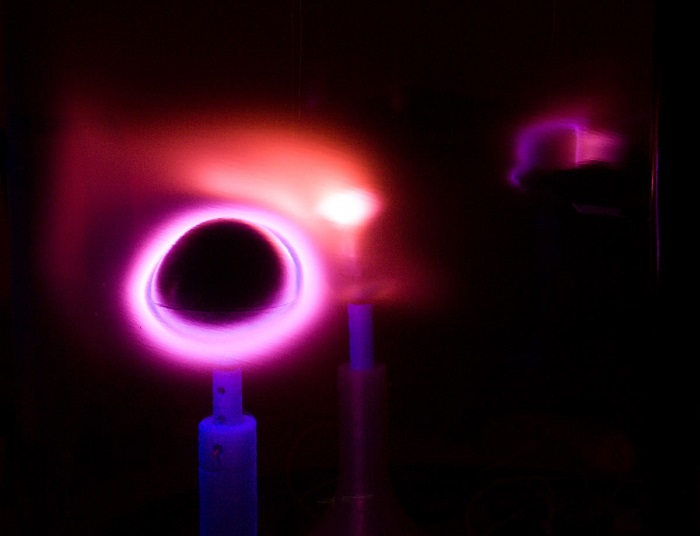 Capturing alien auroras in a bottle

NASA scientists have bottled the sky-filling electric swirls of the Northern Lights – and auroras from several other planets too. This image shows a planeterrella, a large glass dome containing spheres and charged particles that glow under the influence of a magnetic field.

The charged particles glow purple because of the nitrogen in the air inside the dome – unlike the real aurora on Earth, which is usually green due to the oxygen in the atmosphere.

Planeterrellas are a spin-off of a 19th-century experiment called the terrella, which used a single sphere to demonstrated how the Earth's magnetic field accelerates electrons from the solar wind to collide with atoms in the atmosphere, so creating the curtains of light known as the aurora borealis and the aurora australis.

By upping the number of spheres, a planeterrella also recreates the auroral ovals that occur on other planets.

"For example, we can show the reaction when Io, the satellite of Jupiter, sends particles to Jupiter. We can also simulate the aurora at Neptune and Uranus, when their magnetic fields are directly pointing towards the sun," says Guillaume Gronoff of the NASA Langley Research Centre, who led the creation of this planeterrella. Io, Europa and Ganymede produce bright spots in Jupiter's powerful auroral display.

NASA's planeterella is among the first in the US, but Gronoff learned his aurora-wrangling craft while building the original planeterella with his PhD advisor, Jean Lilensten of the Grenoble Institute of Planetology and Astrophysics in France.

Gronoff's next step is to add more magnets and some carbon dioxide to his mini solar system to simulate the auroras on Mars.