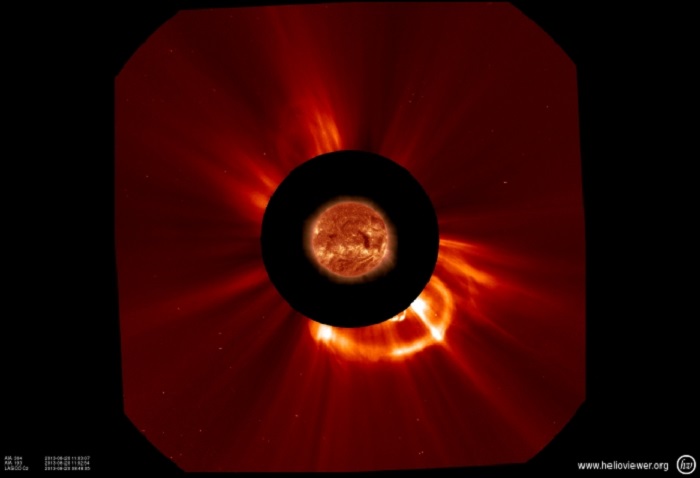 The SOHO LASCO C2 instrument captured this image of the Earth-directed CME. SOHO's coronographs are able to take images of the solar corona by blocking the light coming directly from the Sun with an occulter disk. The location of the actual sun is shown with an image taken by SDO.

On August 20, 2013 at 4:24 am EDT, the sun erupted with an Earth-directed coronal mass ejection or CME, a solar phenomenon which can send billions of tons of particles into space that can reach Earth one to three days later. These particles cannot travel through the atmosphere to harm humans on Earth, but they can affect electronic systems in satellites and on the ground.

Experimental NASA research models, based on observations from NASA’s Solar Terrestrial Relations Observatory show that the CME left the sun at speeds of around 570 miles per second, which is a fairly typical speed for CMEs.

Earth-directed CMEs can cause a space weather phenomenon called a geomagnetic storm, which occurs when they funnel energy into Earth's magnetic envelope, the magnetosphere, for an extended period of time. The CME’s magnetic fields peel back the outermost layers of Earth's fields changing their very shape. In the past, geomagnetic storms caused by CMEs of this strength have usually been mild.

Magnetic storms can degrade communication signals and cause unexpected electrical surges in power grids. They also can cause aurora. 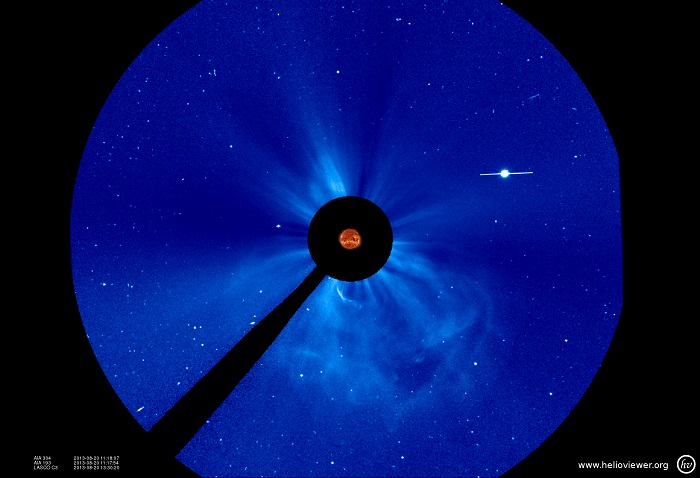 The SOHO LASCO C3 instrument captured this coronographic image of the Earth-directed CME. The bright white object to the right is the planet Mercury.