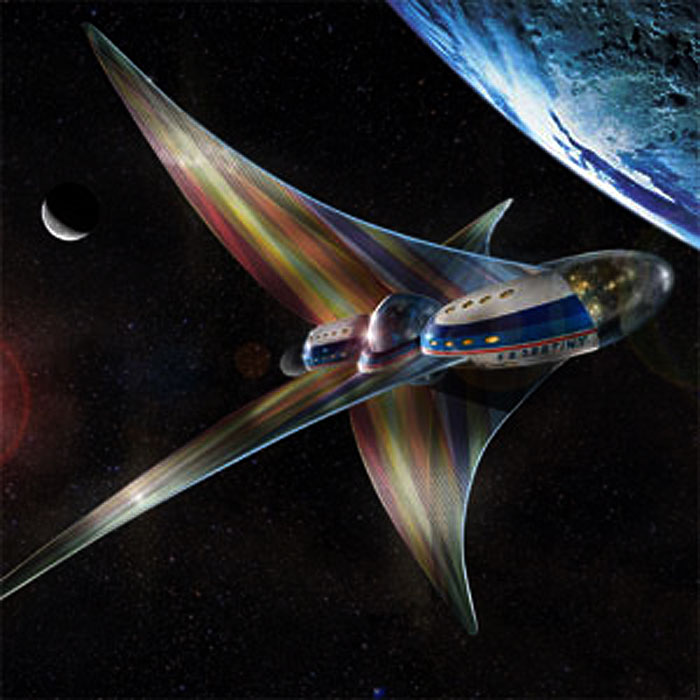 Here's What Your $5 Billion Space Yacht Could Look Like
John Spencer, president of the Space Tourism Society, has been working since the 1990s on Destiny, his vision for living the high life very high above the surface of the Earth.
.
Last month PayPal told the world about PayPal Galactic, a proposal to create a payment system for space purchases. Along with the announcement came a series of fantastic retro-futuristic illustrations of an extraterrestrial life of leisure, perhaps depicting some of the good life upon which you'd be spending your space bucks. John Spencer, the president of the Los Angeles–based Space Tourism Society, made those illustrations. And Spencer is doing more than drawing pictures that look like Norman Rockwell meets the Jetsons. He's also designing a space yacht for those among the one percent who want to be early adopters of the luxury orbital getaway.
Spencer's proposed space super yacht Destiny is designed to cruise in Earth's orbit, offering a striking view of our planet. In illustrations, the 300-foot-long ship cuts a remarkable profile—its bulbous body seems almost butterfly-like, with its four sails outstretched like wings in midflight. Like PayPal Galactic, Destiny is an idea for a market that doesn't exist yet. Still, this image of Destiny offers a glimpse into John Spencer's vision of spacefaring luxury, one he's been working toward for decades.
"We're getting into things that have probably never ever been thought of before from a real world perspective," he says. "All the things we take for granted we have to redesign."
For Destiny, this includes how the beds will be designed to prevent passengers from drifting away in their sleep, and how dining rooms will be laid out so food won't float away. Even the material Destiny will be made of has yet to be invented. While many of his designs seem to be far-fetched today, Spencer is hopeful that the space yacht will be real and in orbit within 15 years.
Body
The ship's hull will be made of a dozen spheroid inflatable sections, which will be expanded and fused together in orbit. Destiny is meant to stay in space after being built and never reenter Earth's atmosphere, so the body sections must maintain their shape and integrity in the vacuum environment of space over the course of the yacht's life.
Spencer, a space architect and designer by trade, wrote in his book Space Tourism: Do You Want to Go? that spherical structures are ideal for space because their symmetry makes them stable and strong. Each section will have an interior webbed support that will limit how far it can expand.
"The sections of the yacht, some of them are just large volumes, some of them have multiple rooms, it depends on where you are," Spencer said. "Aft is for crew quarters and storage, front is for entertainment."
Power and Propulsion
Because Destiny will be an orbital yacht, it will not need the massive engines and large fuel reserves required to escape Earth's atmosphere. In fact, it won't have an engine at all. The ship will be outfitted with maneuvering modules with thrusters. The modules, which will be 2-feet deep, 2-feet wide, and 4-feet long, will be positioned strategically along the hull. Should the ship need to maneuver to avoid space debris or another ship, the modules can be operated wirelessly from the bridge. Spencer says that he is exploring the use of flywheels to power the thrusters.
In fact, Spencer envisions his space yacht as totally wireless. There will be no single power distribution system—long-life batteries will power all of the ship's 300 to 400 electrical devices. Each water and waste-management unit is self-contained with its own recycling, purification system, and reserve water supply. "[It] frees the designers to get pretty outrageous in terms of design because you're not dealing with strict plumbing and electrical," Spencer says.
As the batteries run out of juice, they will be brought to a charging station by a small army of service robots. The bots will also monitor the water and waste-management systems.
. 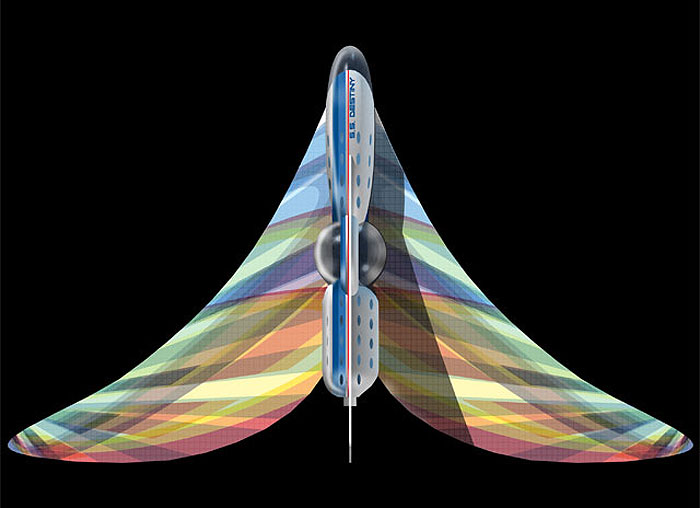 Sails
Destiny's four distinctive sails are more than ornamentation. They'll double as solar panels, absorbing the light and heat from the sun and using some of the power generated to charge the batteries onboard, while dissipating the excess. Spencer doesn't know what the material he'll need for Destiny's sails or hull will actually look like. Undeterred, he has dubbed the yet-to-be-discovered material Futuretanium. No word yet whether it will be an alloy of unobtanium.
Float Sphere
Passengers will be able to enjoy the benefits of zero gravity in the orb situated in the middle of Destiny's hull. The 60-foot-wide float sphere will offer 120-degree views outward and toward Earth. Spencer describes it as a "big friggin' open space where you can really experience zero gravity" and float around. "Living in zero gravity is the most unique experience you can have going to space," he says. "That's why the float sphere is such a prominent aspect of Destiny's design."
Creature Comforts
Destiny wouldn't deserve the classification of super space yacht if it didn't come with a few space-age amenities. Airflow will be monitored by mobile airflow compensators, or "bugs," that will silently follow passengers around to keep the air comfortable, dispensing hot or cold air as needed and responding to voice commands.
In Spencer's vision for the ship, Destiny's hospitality staff will offer massages, chefs will be brought on board to provide meals, and astronomy experts will explain to passengers what they are seeing as the gaze out the viewports.
There will even be a floating hot tub in the float sphere, though an orbital spa won't look quite like its earthbound counterparts. Spencer's plan for the "Hot Sphere" involves a layer of water surrounding a mechanical sphere, which heats the water and sprays bubbles. No solid outer layer is needed since water naturally forms a sphere in zero gravity. Gyroscopes will keep the mobile Jacuzzi in place.
And Finally, Price
All this innovation will be expensive. Anyone looking to buy a Destiny-class space yacht will have to cough up a cool $5 billion to $6 billion. It's enough to make the six-figure price tag people are paying to book a seat on the first suborbital tourism flights look like a bargain.
Why the name "Destiny," anyway? Spencer had two reasons: "It was literally my destiny to work on these things. Plus anyone who is going to spend five or six billion bucks on one of these things is going to have a bit of an ego and will want a cool name."
.
Quelle: PopularMechanics.
« Zum vorherigen Eintrag Zum nächsten Eintrag »
3453 Views
Created with page4