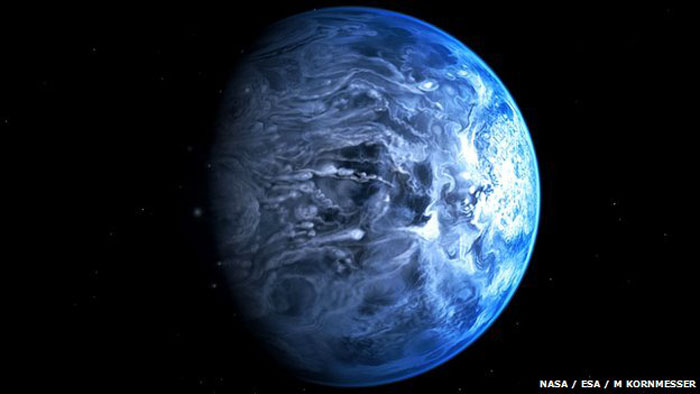 The turbulent alien world lies some 63 light-years from Earth

For the first time, astronomers have determined the true colour of a planet orbiting another star.
The world, known as HD189733b, has a deep azure hue - probably the result of silicate (glass) rain in the atmosphere, which scatters blue light.
Details of the discovery, made with the Hubble Space Telescope, are to appear in Astrophysical Journal Letters.
Although it might resemble Earth from a distance, HD189733b is a huge gas giant which orbits close to its host star.
The temperature of the planet's atmosphere is a scorching 1,000C, and it rains glass, sideways, in howling 7,000km-per-hour winds.
Its atmosphere has been found to be dramatically changeable and exotic, with hazes and violent bursts of evaporation.
At a distance of 63 light-years from us, this turbulent alien world is one of the nearest exoplanets to Earth that can be seen crossing the face of its star.
It has been extensively studied by ground- and space-based telescopes. Now, astronomers have measured its visible colour.
. 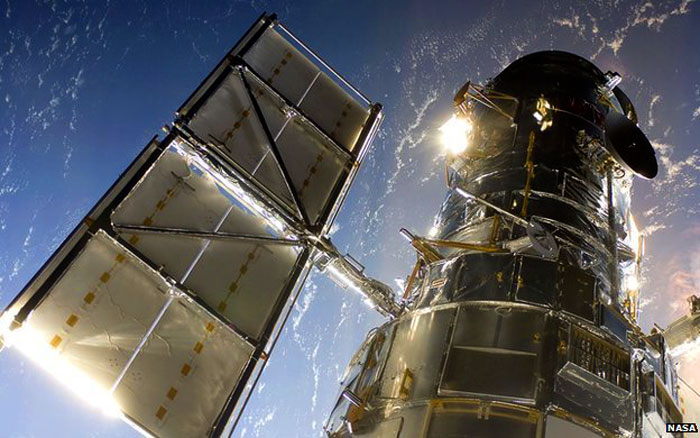 The team used Hubble's STIS instrument to isolate the planet's light from the light of its host star
.
"Measuring its colour is a real first - we can actually imagine what this planet would look like if we were able to look at it directly," said Prof Frederic Pont, from the University of Exeter.
In order to measure what this planet would look like to our eyes, the astronomers measured how much light was reflected from its surface - a property known as albedo.
HD 189733b is faint and close to its sun. But as the planet passed behind its host star, the astronomers were able to measure changes in the spectrum as light reflected by the planet was temporarily blocked out.
"We saw the brightness of the whole system drop in the blue part of the spectrum when the planet passed behind its star," explained Tom Evans from the University of Oxford, first author of the paper.
.

The star HD 189733, around which the blue planet orbits, can be seen in the centre of this star field
.
"From this, we can gather that the planet is blue, because the signal remained constant at the other colours we measured."
Earth looks blue from space because the oceans absorb red and green wavelengths more strongly than blue ones, and reflect the blue-ish hue of our sky.
The exoplanet's azure colour does not come from the reflection of an ocean, say the researchers, but is probably due to the hazy, turbulent atmosphere being laced with silicate particles - which scatter blue light.
HD 189733b presented a favourable case for these kinds of measurements as it belongs to a class of planets known as "hot Jupiters". These massive planets are similar in size to the gas giants in our Solar System, but instead lie very close to their parent stars.
Quelle: BBC
« Zum vorherigen Eintrag Zum nächsten Eintrag »
3959 Views
Created with page4