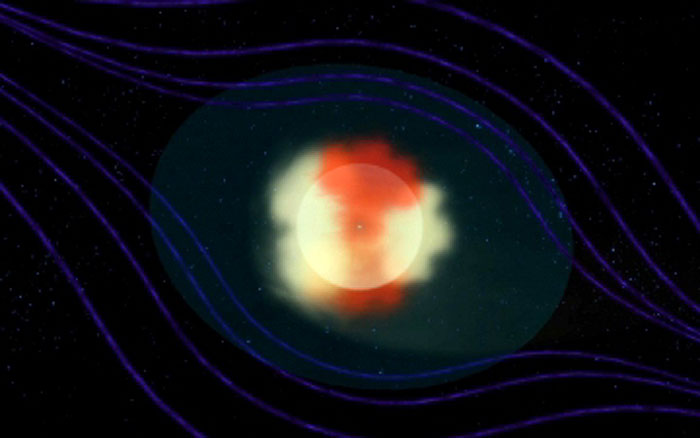 NASA's Interstellar Boundary Explorer, or IBEX, has mapped the boundaries of the tail of our solar bubble, called the heliosphere, for the first time. Using the first three years of IBEX imagery, the team mapped out a tail that shows a combination of fast and slow moving particles. There are two lobes of slower particles on the sides, faster particles above and below, with the entire structure twisted, as it experiences the pushing and pulling of magnetic fields outside the solar system.

NASA's Interstellar Boundary Explorer has observed and described the solar system's tail for the first time.

It has long been assumed that our solar system, like a comet, has a tail. Just as any object moving through another medium – for example, a meteor traveling through Earth’s atmosphere – causes the particles to form a stream trailing off behind it. But the tail of our solar bubble, called the heliosphere, has never actually been observed, until now.
NASA’s Interstellar Boundary Explorer, or IBEX, has mapped the boundaries of the tail of the heliosphere, something that has never before been possible. Scientists describe this tail, called the heliotail, in detail in a paper published on July 10, 2013, in The Astrophysical Journal. By combining observations from the first three years of IBEX imagery, the team mapped out a tail that shows a combination of fast and slow moving particles. There are two lobes of slower particles on the sides, faster particles above and below, with the entire structure twisted, as it experiences the pushing and pulling of magnetic fields outside the solar system.
. 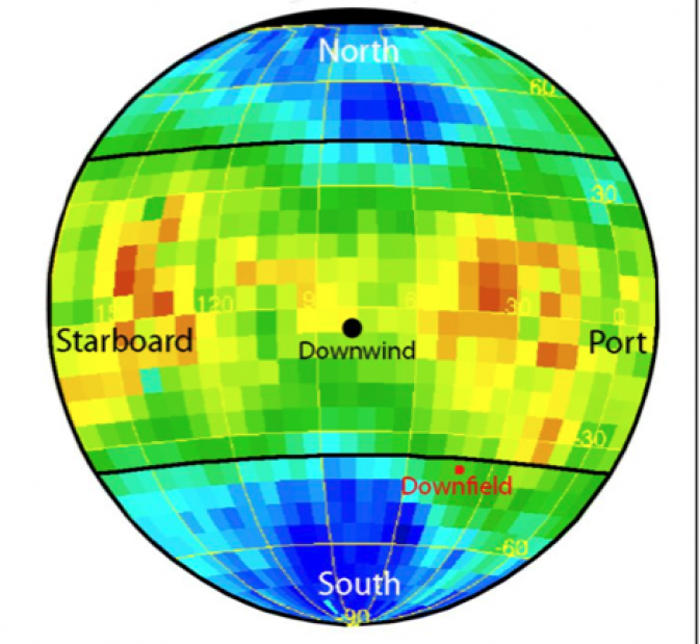 This data from NASA’s Interstellar Boundary Explorer shows what it observed looking down the solar system’s tail. The yellow and red colors represent areas of slow-moving particles, and the blue represents the fast-moving particles.
.
“By examining the neutral atoms, IBEX made the first observations of the heliotail,” said David McComas, lead author on the paper and principal investigator for IBEX at Southwest Research Institute in San Antonio, Texas. “Many models have suggested the heliotail might be like this or like that, but we’ve had no observations. We always drew pictures where the tail of the heliosphere just disappears off the page, since we couldn’t even speculate about what it really looked like.”
While telescopes have spotted such tails around other stars, it has been difficult to see whether our star also had one. Pioneer 10 was headed in that direction after it crossed the orbit of Neptune in 1983. However, it lost power in 2003 before it moved into the tail so we have no data from spacecraft directly in the tail. Watching it from afar is hard, because the particles in the tail, and throughout the heliosphere, don’t shine, so they can’t be seen conventionally.
IBEX, on the other hand, can map such regions by measuring neutral particles created by collisions at the heliosphere’s boundaries. This technique, called energetic neutral atom imaging, relies on the fact that the paths of neutral particles aren’t affected by the heliosphere’s magnetic fields. The particles travel in a straight line from collision to IBEX. Consequently, observing where the neutral particles came from describes what’s going on in these distant regions.
“Using neutral atoms, IBEX can observe far away structures, even from Earth orbit,” said Eric Christian, IBEX mission scientist at NASA’s Goddard Space Flight Center in Greenbelt, Md. “And IBEX scans the entire sky, so it has given us our first data about what the tail of the heliosphere looks like, an important part of understanding our place in and movement through the galaxy.”
The journey for these neutral atoms begins years before it hits the IBEX instruments. The solar wind blowing out from the sun streams out in all directions, moving far past the furthest planets, eventually slowing down and bending back along the tail, in response to the pressure from the inflowing interstellar material. The particles join a mass migration of particles moving backward inside the boundary of the heliosphere – a thin layer called the heliopause.
While this is happening, a steady stream of slower, neutral atoms originating from elsewhere in the galaxy, travel across the solar system. When one of these neutral atoms collides with one of the faster charged particles, they can exchange an electron. The result can be a slow charged particle and a fast neutral atom. The neutral is no longer bound to the magnetic fields, and instead speeds straight off in whatever direction it was pointed at that moment. Some of these travel for years until they are detected by IBEX.
-

“By collecting these energetic neutral atoms, IBEX provides maps of the original charged particles,” said McComas. “The structures in the heliotail are invisible to our eyes, but we can use this trick to remotely image the outermost regions of our heliosphere.”
Early results from IBEX on the heliotail originally suggested there might just be a small region of slow-moving wind down the heliotail, but once scientists had collected enough data they realized they had initially seen only part of the picture. Based on the map of the heliotail they have now provided, someone looking straight down the tail sees a shape a little like a four-leaf clover. The two side leaves are filled with slow moving particles, and the upper and lower leaves with fast ones. This shape makes sense, given the fact that the sun has been sending out mostly fast solar wind near its poles, and slower wind near its equator for the last few years – a common pattern in the most recent phase of the sun’s 11-year activity cycle.
The four-leaf clover does not align perfectly with the sun, however. The entire shape is rotated slightly, indicating that as it moves further away from the sun and its magnetic influence, the charged particles have begun to be nudged into a new orientation, aligning with the magnetic fields from the local galaxy. Scientists still do not know how long the tail is.
“The tail is our footprint on the galaxy, and it’s exciting that we’re starting to understand the structure of it,” said Christian. “The next step is to incorporate these observations into our models and start the process of really understanding our heliopshere.”
Scientists can test their computer simulations of the heliosphere against the new observations and improve their models as needed. Together, data from instruments in space and analysis at labs on the ground will continue to improve our understanding of the comet-like tail streaming out behind us.
IBEX is a NASA Heliophysics Small Explorer. The Southwest Research Institute leads IBEX with teams of national and international partners. Goddard manages the Explorers Program for NASA's Science Mission Directorate in Washington.
. 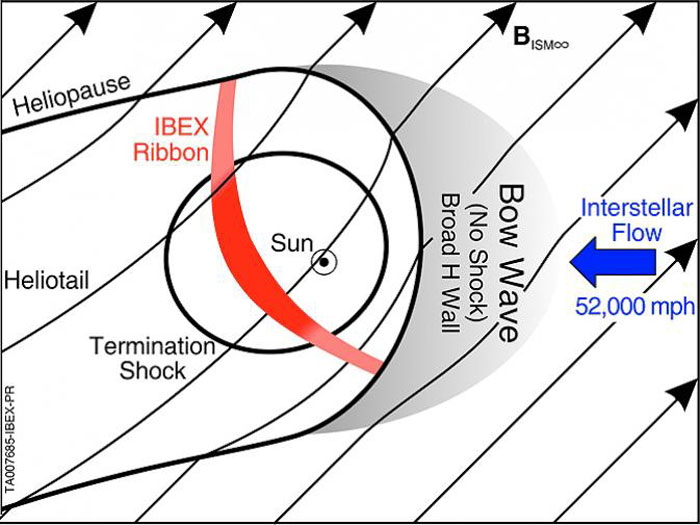 The heliosphere surrounding our solar system is buffeted by strong magnetic fields, shown here as the black, diagonal, upward-pointing arrows. The heliosphere and the interstellar material of the local cloud pass by each other at a speed of 52,000 miles per hour, as shown by the blue arrow.
Quelle: NASA
« Zum vorherigen Eintrag Zum nächsten Eintrag »
4016 Views
Created with page4