Join us live for the spacewalk by ESA astronaut Luca Parmitano and NASA’s Chris Cassidy. Streaming starts at 11:00 GMT (13:00 CEST). The  spacewalk begins at 12:55 GMT (14:55 CEST). Luca's suit is all-white, while that of Chris bears the red stripes.

Their tasks include laying cable routings for the future Russian Nauka laboratory module, installing and replacing communication and heat management systems, and retrieving a camera and experiments for return to Earth. Part of his work will involve Luca standing on a work platform on the Station’s robotic arm under the control of NASA astronaut Karen Nyberg inside the Cupola observation module. Their long day will finish around 21:00 GMT (23:00 CEST) when they return inside NASA’s Quest airlock. Their exertions will be followed by a quiet day to allow them to recover and begin preparing for their second spacewalk in mid-July.

Two Expedition 36 astronauts wrapped up a successful 6-hour, 7-minute spacewalk at 2:09 p.m. EDT Tuesday, completing the first of two July excursions to prepare the International Space Station  for a new Russian module and perform additional installations on the station’s backbone.
Flight Engineers Chris Cassidy of NASA and Luca Parmitano of the European Space Agency began the spacewalk at 8:02 a.m. as they switched their spacesuits to battery power.  After the two spacewalkers exited the hatch, Cassidy moved to the top of the Z1 truss to remove and replace a Space-to-Ground Transmitter Receiver Controller.  This unit, one of two that allows for two independent strings of Ku-band communication for video and data, failed in December 2012.
In parallel to this, Parmitano headed out to the Express Logistics Carrier-2 on the starboard truss segment and retrieved two experiments that were part of the Materials International Space Station Experiment-8, or MISSE-8.  The Optical Reflector Materials Experiment III (ORMatE-III) and the Payload Experiment Container, which assessed the impacts of the space environment on materials and processor elements, are scheduled to return to Earth aboard the SpaceX-3 commercial cargo craft later this year.
.
Brief Summary
The Materials on International Space Station Experiment - 8 (MISSE-8) is a test bed for materials and computing elements attached to the outside of the International Space Station (ISS). These materials and computing elements are being evaluated for the effects of atomic oxygen, ultraviolet, direct sunlight, radiation, and extremes of heat and cold. This experiment allows the development and testing of new materials and computing elements that can better withstand the rigors of space environments. Results will provide a better understanding of the durability of various materials and computing elements when they are exposed to the space environment, with applications in the design of future spacecraft.
.
While he was out on the on the starboard truss, Parmitano also photographed the Alpha Magnetic Spectrometer-02 (AMS-02) to provide the research team a visual assessment of the condition of this state-of-the-art particle physics detector.
.
Brief Summary
The Alpha Magnetic Spectrometer - 02 (AMS-02) is a state-of-the-art particle physics detector constructed, tested and operated by an international team. The AMS-02 uses the unique environment of space to advance knowledge of the universe and lead to the understanding of the universe's origin by searching for antimatter, dark matter and measuring cosmic rays.
.
Cassidy meanwhile routed power cables to support the addition of the new Russian Multipurpose Laboratory Module scheduled to arrive at the station later this year. Cassidy routed cables from the Unity node to the interface between the Pressurized Mating Adapter-1 and the Zarya module. The station cosmonauts will complete that set up during a future spacewalk. The new module, known as Nauka, will serve as a research facility, docking port and airlock for future Russian spacewalks and will replace the Pirs docking compartment.
The two spacewalkers teamed back up to remove two Radiator Grapple Bars (RGBs) and install one on the port side truss and the other on the starboard side so they will be more strategically located. These RGBs, which are intended to aid in the removal and replacement of failed thermal radiators, were delivered to the station aboard SpaceX-2. While riding at the end of the station’s Canadarm2 robotic arm under the control of Flight Engineer Karen Nyberg, Parmitano transported the RGBs to the worksites where Cassidy bolted them down.
As Parmitano rode the arm back from the starboard side to port, he used that opportunity to remove a failed camera assembly. The Mobile Base Camera Light Pan-Tilt Assembly, which failed back in May 2012 just before the arrival of the Japanese H-II Transfer Vehicle, was one of the prime viewing systems for monitoring visiting vehicles.  Mission managers plan to bring the assembly back to Earth for refurbishment and return it to the station later as a valid spare.
With those tasks complete and the RGBs installed, Cassidy began the installation of two Z1 truss Y-bypass jumpers to provide power redundancy and stability for critical station components. The bypass jumper installation will be completed during the July 16 spacewalk.  In conjunction with some cable reconfigurations completed earlier this year inside Unity, the two Y-bypass jumpers will allow the station team to quickly regain critical loads in the event of a loss of one of the external power modules without the need to commit to a spacewalk.
Working briskly ahead of the planned timeline, Parmitano installed a multi-layer insulation cover to protect the docking interface of Pressurized Mating Adapter-2 mounted to the Harmony module.
The two spacewalkers then moved on to a couple of get-ahead tasks -- including the initial routing of cables from the Zarya module to Pressurized Mating Adapter-1 -- before moving back into the Quest airlock to end the spacewalk.
With the completion of his fifth career spacewalk, Cassidy now has a total of 29 hours, 42 minutes of total spacewalking time to his credit.  It was the first spacewalk for Parmitano, and the first for an Italian.
Tuesday's spacewalk  was the 170th in support of station assembly and maintenance, totaling 1,073 hours, 50 minutes.
. 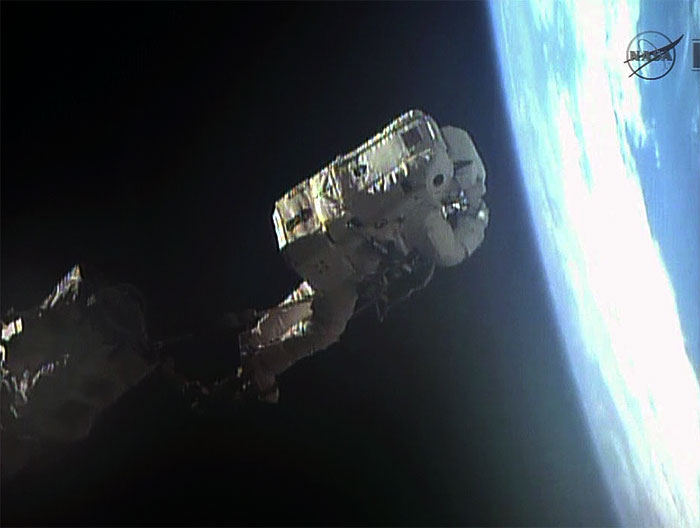 Flight Engineer Luca Parmitano rides Canadarm2 to an International Space Station worksite during Tuesday's Expedition 36 spacewalk.
.
Quelle: NASA
.
Update: 10.07.2013
.
Yesterday, at 12:02 GMT, astronauts Luca Parmitano and Chris Cassidy switched their spacesuits to battery power and began their spacewalk outside the International Space Station.
The sortie was planned for six and half hours, but the astronauts proceeded faster than planned and had time for extra ‘get-ahead’ tasks, routing cables and staging equipment to help future spacewalkers. The final duration of Tuesday’s extravehicular activity was 6 hours and 7 minutes.
The primary goals were to replace a Ku-band communications transceiver, retrieve two science experiments that exposed material samples to space, install cables for Russia’s coming Nauka laboratory module, and carry out routine maintenance. Nauka will replace the Pirs module currently attached to the Station.
The highlight of the spacewalk for Luca was surely riding on the platform at the end of the Station’s Canadarm2 robot arm – this moment is shown in the image.
Operated by Karen Nyberg inside the Station, the arm moved Luca to the port side of the Station’s long central truss to remove a failed camera that will be returned to Earth for analysis.
Finally, Luca installed a multilayer insulation cover to protect the docking interface of the Pressurized Mating Adapter-2 on the Harmony module.
Luca and Chris will venture out to space again next week to continue work started during this spacewalk.
. 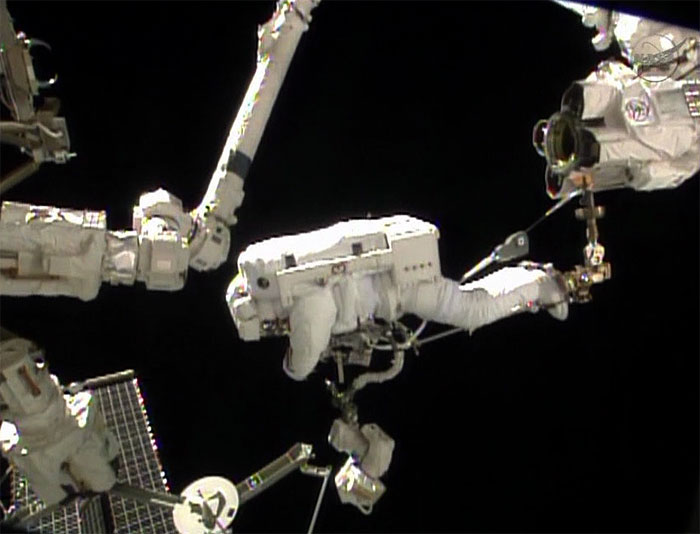 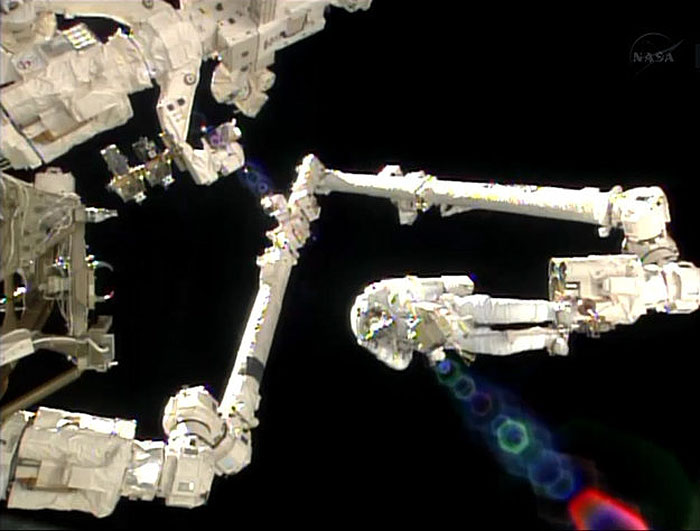 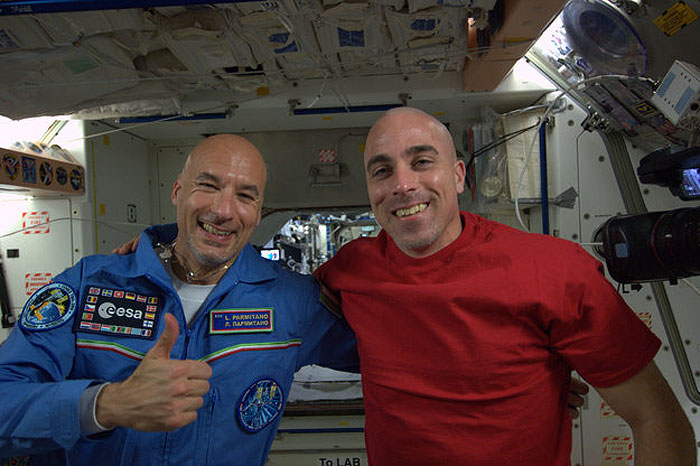 ESA astronaut Luca Parmitano gives a thumbs up with NASA astronaut Chris Cassidy in his first image tweeted from the International Space Station.
. 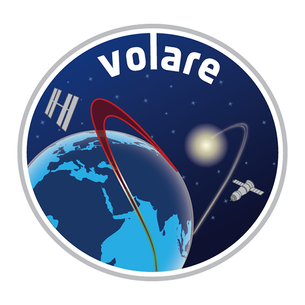