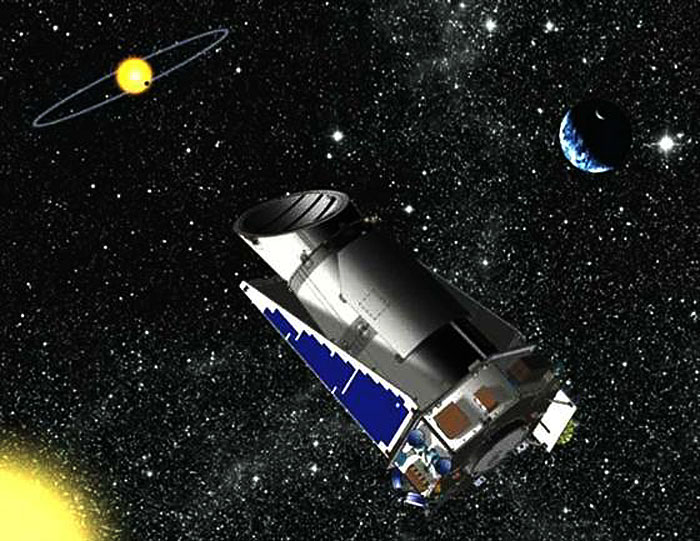 The team behind NASA's planet-hunting Kepler observatory says it will start trying to revive the ailing probe in mid- to late July.
Two of the four reaction wheels in Kepler's fine-pointing guidance system are out of commission, which has left the 15-foot-long (4.7-meter-long) spacecraft in limbo since mid-May. Three wheels have to be working in order for Kepler to observe distant stars with the precision needed to detect planets.
Kepler identifies distant worlds by looking for the telltale dips in starlight that occur when a planet passes across its sun's disk. The spacecraft is designed to stare at 150,000 stars in a patch of sky that straddles the constellations Cygnus and Lyra. Since the telescope's launch in 2009, Kepler has identified 3,277 planet candidates and 134 confirmed planets — and there's lots more archived data yet to be analyzed.
Roger Hunter, project manager for the $600 million mission, laid out the rescue plan in an update issued Wednesday. "The engineering team has devised initial tests for the recovery attempt and is checking them on the spacecraft test bed at the Ball Aerospace facility in Boulder, Colo.," he wrote. "The team anticipates that exploratory commanding of Kepler's reaction wheels will commence mid- to late July."
The spacecraft is currently in an energy-conserving mode known as Point Rest State, and will remain in that mode during the tests, Hunter said. He said other adjustments have been made to improve the spacecraft's fuel efficiency and reduce the possibility that it would retreat into safe mode. Both those steps should improve the chances that Kepler can be nudged back into service.
When members of the Kepler team announced in May that the spacecraft was out of commission, they said they would probably try spinning one of the two unresponsive wheels backward or forward to get it unstuck.
Kepler is among several aging space probes that are going through transitions:
Jason-1, a U.S.-French satellite that tracked rising sea levels for more than 11 years, was decommissioned this week, NASA announced. John Grunsfeld, NASA's associate administrator for science, noted in a statement that since its launch, Jason-1 "charted nearly 1.6 inches (4 centimeters) of rise in global sea levels, a critical measure of climate change and a direct result of global warming." NASA said a non-recoverable failure in Jason-1's last working transmitter caused the spacecraft to go out of contact on June 21. The spacecraft is expected to remain in orbit for at least 1,000 years.
France's space agency, CNES, said the COROT planet-hunting spacecraft was being retired from service. The probe stopped sending data last November, and efforts to restart observations have been unsuccessful. "A series of operations will now be performed to lower COROT's orbit and conduct some technology experiments before passivating the satellite," CNES said in a statement. "Its journey will end as it burns up on re-entry in Earth's atmosphere."
NASA turned off the decade-old Galaxy Evolution Explorer, or GALEX, after lending it to Caltech for a year of privately funded operation. The $150 million GALEX satellite surveyed hundreds of millions of galaxies to help scientists study stellar evolution. The craft will stay in orbit for at least 65 years before burning up in Earth's atmosphere.
Quelle: NBC

A graph/scatter plot of radius vs period for Kepler planet candidates. Comparing the distributions from 2010-2011 (blue), 2012 (red), and 2013 (yellow), notice how more and more small planets are revealed. This plot excludes "single-transit" events. Period for single transit events must be estimated from the transit duration. Here we demand 2 or more transits for the plot.
.
Kepler Mission Manager Update: Preparing for Recovery
.
Operations in Point Rest State (PRS) have continued for the spacecraft. The spacecraft was placed in PRS on May 15, 2013, after the failure of reaction wheel 4. It has been 53 days since the spacecraft collected new science data.
As noted in the last update, the team has made adjustments to onboard fault parameters for the star trackers to lessen the possibility of entry into safe mode. We have also made additional adjustments to the Thruster-Control Safe Mode to improve its fuel efficiency. This provides yet more protection for spacecraft fuel reserves while the team continues to work on reaction wheel performance assessment and recovery plans.
The engineering team has devised initial tests for the recovery attempt and is checking them on the spacecraft test bed at the Ball Aerospace facility in Boulder, Colo. The team anticipates that exploratory commanding of Kepler’s reaction wheels will commence mid-to-late July. The Kepler spacecraft will remain in PRS until and during the tests.
Later this month, an update to the data processing pipeline software will be deployed. Called SOC 9.1, this enhancement has been underway for several months and is in the final stages of verification and validation. This software release provides additional refinements to better tease out small planet signatures from the four years of Kepler data. It will also decrease the frequency of false positives.
The team continues to disposition Kepler Objects of Interest (KOIs) found by searching the observational data from Quarters 1 to Quarter 12. With 63 more planet candidates added since the last report, the count now stands at 3,277.
While Kepler data analysis continues, we were pleased to note the discoveries recently announced by European Southern Observatory (ESO).  A team of astronomers has combined new observations of Gliese 667C with existing data from HARPS at ESO’s 3.6-metre telescope in Chile, revealing a system with at least six planets. A record-breaking three of these planets are super-Earths lying in the zone around the star where liquid water might exist, making them possible candidates for the presence of life. This is the first system found with a fully packed habitable zone.
Also this month, a research team from the Harvard-Smithsonian Center for Astrophysics in Cambridge, Mass., used Kepler data to find two planets smaller than three times the size of Earth orbiting sun-like stars in a one billion year old star cluster named NGC 6811. The result demonstrates that small planets can form and persist in an open cluster, and casts the net wider in the search for planets the size and temperature of Earth. With this discovery, 134 planets have been confirmed using Kepler data.
And, finally we note the announcement from France's space agency, Centre National d’Etudes Spatiales (CNES), on the retirement of the Convection, Rotation, and planetary Transits (CoRoT) mission. The CoRoT spacecraft was launched Dec. 26, 2006, and paved the way for Kepler in terms of space-based identification of transiting exoplanets and also the detection of acoustic oscillations in sun-like stars. We congratulate CNES on a great run with the CoRoT spacecraft!
Quelle: NASA
« Zum vorherigen Eintrag Zum nächsten Eintrag »
3980 Views
Created with page4