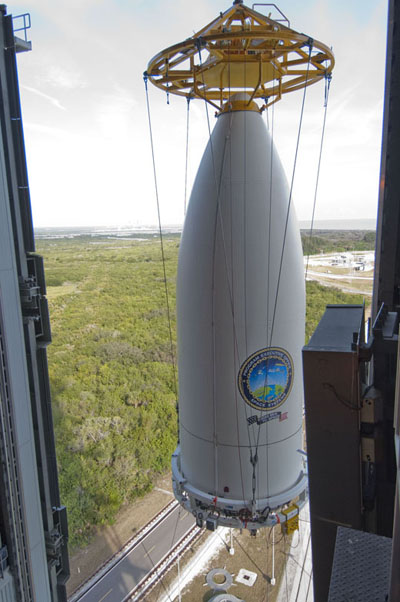 The second satellite in the orbital assembly of the U.S. Navy's new mobile communications network was being loaded atop its United Launch Alliance Atlas 5 rocket booster today at Cape Canaveral.
Liftoff is scheduled for July 19 during a morning window of 8:48 to 9:32 a.m. EDT (1248-1332 GMT) from Complex 41.
At nearly 15,000 pounds, the Mobile User Objective System satellite is a hefty cargo requiring the most powerful version of the Atlas 5 to carry the payload into a highly elliptical geosynchronous transfer orbit.
The 551 configuration of the Atlas features five strap-on solid-fuel boosters and the five-meter-diameter nose cone. Previous flights have included hurling NASA's New Horizons probe to Pluto and Juno to Jupiter.
ULA created this cutaway illustration that shows the elements of the rocket.
It will be the fifth Atlas 5 of the year, the 39th in the past decade and the second for the MUOS series following the successful first deployment in February 2012.
The Atlas 5 and its Centaur upper stage will deliver the MUOS 2 spacecraft into a preliminary orbit about three hours after liftoff, allowing the Lockheed Martin-built satellite to begin its independent series of maneuverings to achieve a geosynchronous orbit 22,300 miles above Earth.
MUOS is a next-generation space communications system that utilizes commercial 3G cell phone technology to provide voice, data and video services to military troops on the move.
Each MUOS satellite is likened to a cell tower in the sky to serve ships, submarines, aircraft, land vehicles and terminals in the hands of troops. The design enables increases in the number of users and amount of communications that can be routed to military forces in contrast to current satellites.
When completed by 2017, the MUOS constellation will feature four primary birds and one spare in orbit to ring the planet and provide capacity, availability and global coverage for mobile military communications like never before.
. 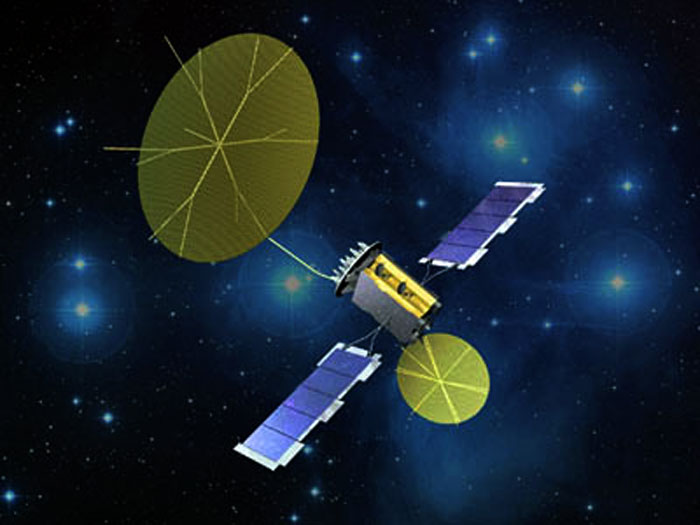 An artist's concept of MUOS. Credit: Lockheed Martin
.
MUOS 2 arrived in Florida on May 13 after being flown on an Air Force C-5 transport aircraft from Lockheed Martin's satellite factory in Sunnyvale, Calif.
Unloading at the Shuttle Landing Facility, the craft was taken to the commercial Astrotech satellite processing campus in nearby Titusville for final testing, the loading of propellants and encapsulation within the rocket's payload fairing.
Crews early Monday moved the satellite across Kennedy Space Center and down to the Vertical Integration Facility where the Atlas awaited the arrival of its cargo. MUOS was hoisted atop the rocket to begin the connection process and complete the assembly of the 206-foot-tall launcher.
A tip-to-tail electrical check, called the combined systems test, will be run this week to verify all is in readiness for flight.
Rollout of the Atlas 5 aboard its mobile platform to the launch pad is planned for July 17. The launch team will initiate the seven-hour countdown in the early morning hours of July 19.
Quelle: US-NAVY
« Zum vorherigen Eintrag Zum nächsten Eintrag »
4020 Views
Created with page4