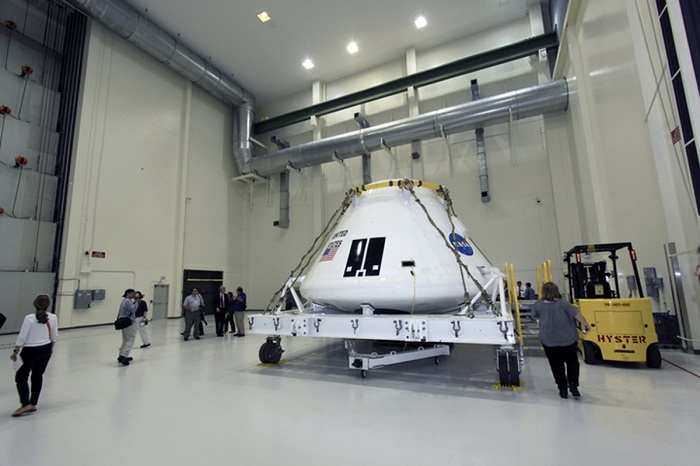 The boilerplate test article was modified at Langley Research Center in Virginia for Orion recovery testing.

Engineers and technicians at Kennedy Space Center in Florida, Langley Research Center in Virginia and Lockheed Martin Space Operations in Denver, Colo., prepared unique hardware that was used in a fit check June 25-28 of equipment that will be used to recover Orion upon splashdown in the Pacific Ocean. The recovery operations are led by the Ground Systems Development and Operations Program at Kennedy.

After traveling 3,600 miles above the Earth for its Exploration Flight Test-1 mission in September 2014, Orion will splash down for a landing in the Pacific Ocean, where it will be recovered with the help of the United States Navy. A test of the recovery equipment and procedures will take place in August at the Naval Station Norfolk port facility in Norfolk, Va. To be ready for that test, a fit check of the hardware was conducted at the “Trim Pad” near Langley.

For the first time, the crew module recovery cradle designed by Lockheed Martin, the boilerplate handling fixture bumper assembly designed by Kennedy, and the Orion boilerplate test article (BTA) – a life-size test version of the spacecraft designed and built by Langley – was assembled and tested in one place.

The BTA originally was used for water impact testing at Langley’s hydro impact basin for the Orion Structural Passive Landing Attenuation for Survivability of Human-crew (SPLASH) project. Langley redesigned, analyzed, and modified the BTA to simulate the EFT-1 crew module’s mass properties and improve its water resistance for recovery operations.

“One of the goals of this fit check was to practice putting together and taking apart the recovery hardware,” said Mike Generale, Orion recovery operations manager and recovery test director at Kennedy. “It’s a chance to learn how to operate the newly developed hardware and confirm that it is compatible.”

The “Trim Pad” is a large area of concrete near the hangar where the hardware was stored for the fit check. Prior to checkout, the team painted the outline of a ship’s well deck onto the concrete in order to confirm that the configuration of the recovery hardware will fit.

The one-of-a-kind handling fixture assembly was developed at Kennedy’s Prototype Laboratory and manufactured at the center’s Launch Equipment Test Facility by several Engineering Services contractors. It is the first piece of landing and recovery hardware to be completed and delivered to Langley in May.

“We started with an initial design using computer modeling,” Parr said. “As the requirements were refined, we kept working towards a final design. The design portion took about one month to achieve.”

Essentially, the handling fixture is a steel beam frame about 17 feet wide and 19 feet long. The fixture has a bolt-on bumper assembly with cushions, or bumpers, that float up and down on guide rails. The assembly frame and bumper will be used to guide the Orion test article into the proper orientation over the handling fixture.

The crew module recovery cradle then will be used to secure the Orion crew module in the recovery ship and to move it out of the ship after returning to port.

“The collaboration between the Navy and NASA during the fit check ensured operational success and will benefit the Orion EFT-1 mission,” said Lisa Hawks, SPLASH operations and integration manager."