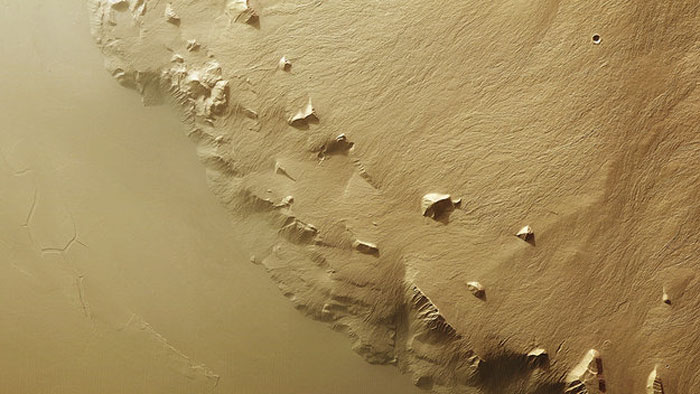 Hundreds of individual lava flows are seen frozen in time on the flanks of Olympus Mons, the largest volcano in the Solar System.
The images, taken on 21 January 2013 by ESA’s Mars Express, focus on the southeast segment of the giant volcano, which towers some 22 km above the surrounding plains. This is more than double the height of Mauna Kea, the tallest volcano on Earth at 10 km, when measured from its oceanic base to summit.
Like Mauna Kea, Olympus Mons is a shield volcano, with gently sloping sides that extend outwards at low angles. But unlike other shield volcanoes, it has an abrupt cliff edge, or scarp, separating it from the surrounding plains.
The scarp circles the entire volcano, in places reaching 9 km high. It was likely formed during a number of catastrophic landslides on the flanks of the volcano, during which the resulting debris was transported several hundred kilometres beyond the extent of these images.
Lava flows cover the base of the volcano, punctuated by a handful of pointy and flat-topped blocks that were either rotated or uplifted during the collapse.
. 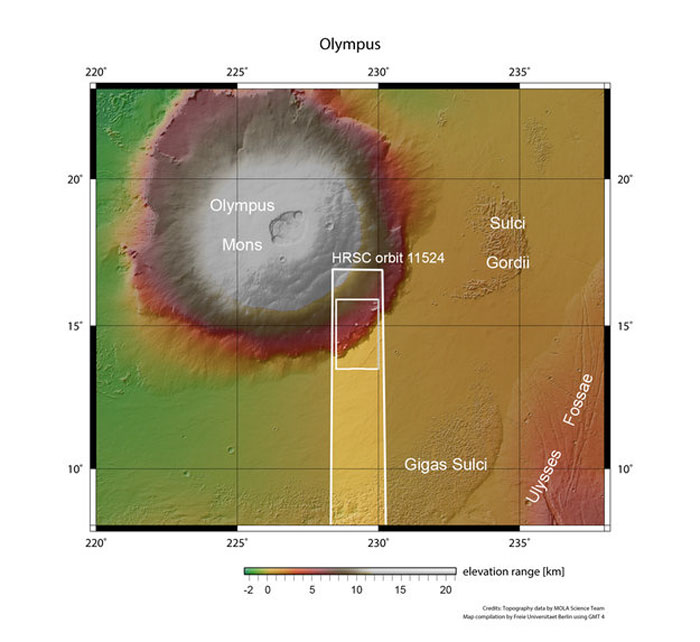 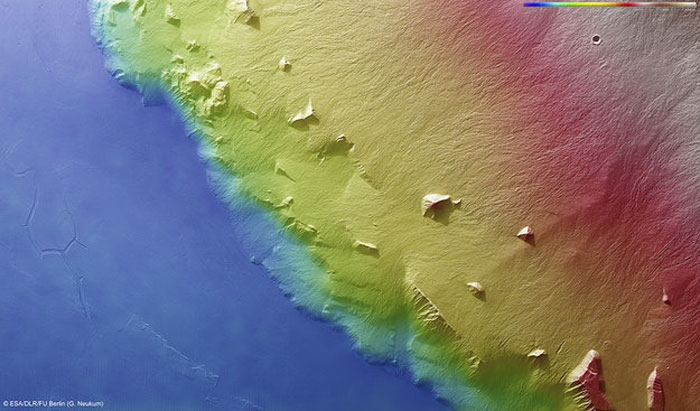 Olympus Mons flank topography
.
The transition from the towering heights of the volcano down onto the flat lava plain at the base of the scarp can be easily seen in the colour-coded topography image.
In the leading colour image and perspective views, extensive networks of narrow, overlapping lava flows are proof of an extremely active volcanic past. The lava, long since solidified, once spilled down the natural contours of the volcano, spreading out into broad fans as it reached the scarp and plains below.
Flows that ended before reaching the scarp did so with rounded tongues, as the lava cooled and crept to a stop.
. 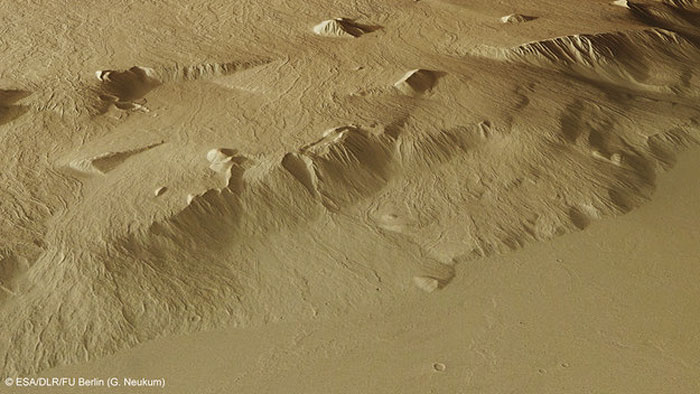 Perspective view of Olympus Mons flanks
.
Some lava flows are bounded by steep channel walls, while others were contained in lava tubes. Zooming in to the top left portion of the flank in the leading image reveals one example of an ancient lava tube, its winding track partially exposed in channel segments where the roof of the tunnel has since collapsed.
. 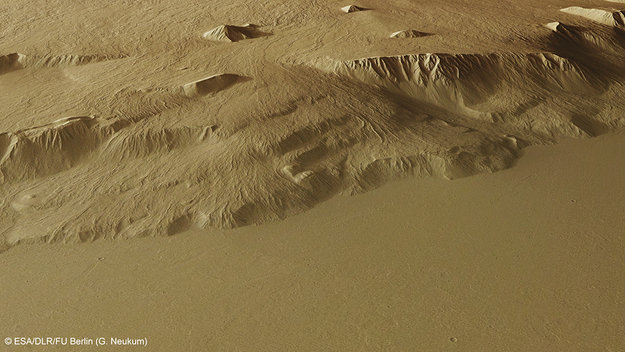 The chaotic lava flows on the flanks provide a stark contrast to the smooth plains seen surrounding the volcano.
Here, only two prominent features are visible: a ‘wrinkle ridge’ in the lower centre of the main image, which formed as lava cooled and contracted to buckle up and distort the surface, and a channel system that branches out into a horseshoe shape. This channel was likely carved by lava, but water may have once flowed here, too.
.

The flank of Olympus Mons in 3D
.
The occurrence of only a few small impact craters in this scene shows that it is relatively young compared with more heavily cratered regions elsewhere on Mars – the older the surface, the greater the exposure time to impact events by asteroids or comets.
Furthermore, by looking at how the lava flows overlap, one can determine their relative ages: those that lie on top, cutting through and overprinting other flows, are the youngest.
For example, the vast lava plain surrounding the volcano truncates the majority of lava flows extending from the flanks, suggesting it is younger still, and that it originated from a location outside of this scene.
The volcanic region hosting Olympus Mons and several other large volcanoes is thought to have been active until tens of millions of years ago, relatively recent on the planet’s geological timescale that spans 4.6 billion years.
Quelle: ESA
« Zum vorherigen Eintrag Zum nächsten Eintrag »
3894 Views
Created with page4