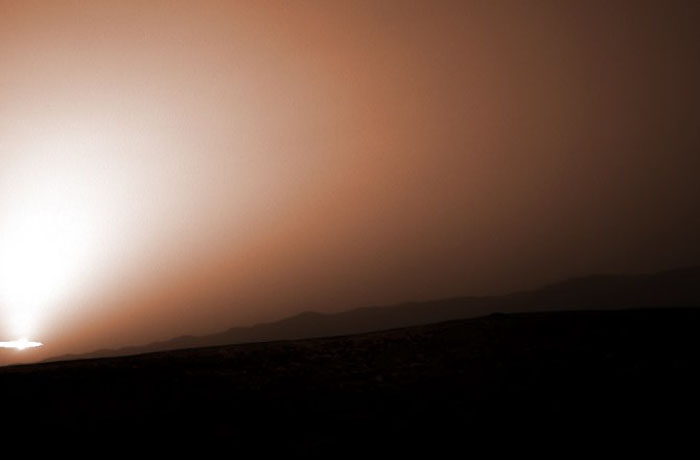 The sun sets over the rim of Gale Crater as seen by NASA's Mars Science Laboratory Curiosity on sol 312 of the mission. False color added.

Mars rover Curiosity may have a busy schedule of science while exploring Gale Crater, but that doesn't mean it can't enjoy the view once and a while.
Over the past few days, NASA's nuclear-powered rover has still been imaging the rocks and dust beneath its wheels, but it has also angled its cameras to the sky.
On sol 312 of the mission (June 22), Curiosity shared a series of photographs of a very alien, yet familiar phenomenon: Mars sunset.
As Mars is 34 percent further away than Earth is to the sun, Martian sunsets are certainly less bright than their terrestrial counterparts, but they are no less beautiful.
.
A sequence of photos spanning just five minutes show the sun dipping below the rim of Gale Crater. 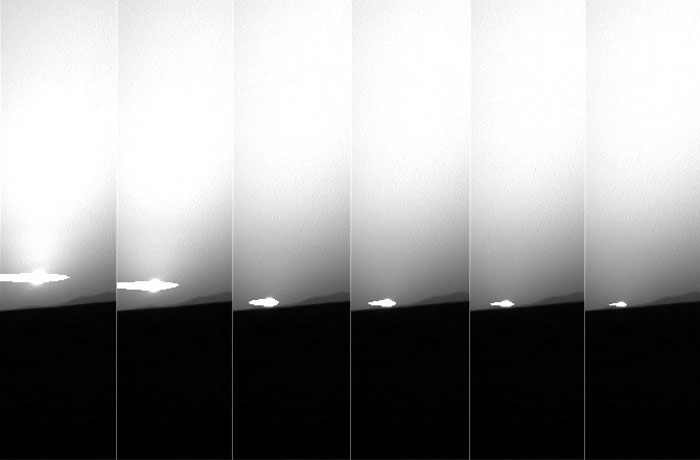 Sequence of raw images showing the sun setting over Gale Crater on sol 312. The sequence of images span 5 minutes. The horizontal lines covering the sun's disk are caused by CCD saturation -- the bright light from the sun causes a 'bleeding' effect across rows of pixels. This is a common phenomenon in CCD optics.
.
But Curiosity didn't stop at snapping the sun going down.
On sol 317 (June 28) of its mission, Curiosity timed it just right to look up and take a series of images with its Navigation Camera at night just as Mars' biggest moon, Phobos, scooted across the sky. A selection of the sequence of photographs are shown below. 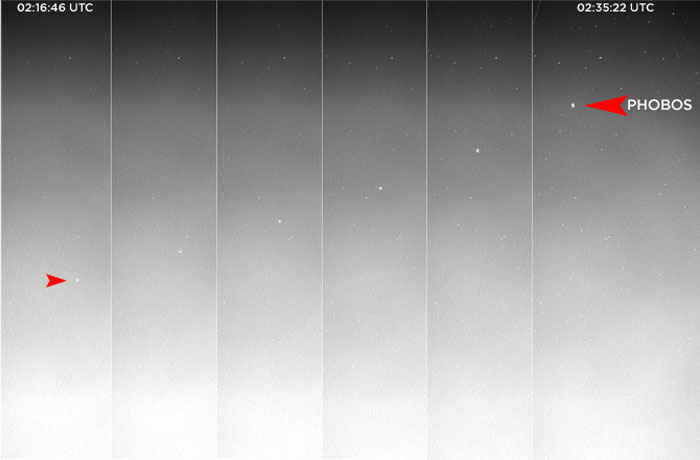 Phobos rises over Curiosity: Sequence of raw images captured by the rover's NavCam of Mars' largest moon on sol 317 of the mission. This sequence spans 19 minutes.
.
Over 27 minutes, Curiosity snapped 86 photos, all of which have been compiled by NASA to create a cool time-lapse video of Phobos rising.
Curiosity may be a robot, but in addition to the awe-inspiring science the mission is producing, it's happy to also take some time out to show us some of the beauty and romance of sunset and moonrise over the Martian landscape.
Quelle: D-News
« Zum vorherigen Eintrag Zum nächsten Eintrag »
3807 Views
Created with page4