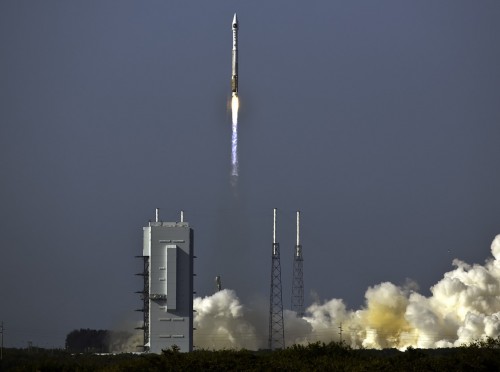 CAPE CANAVERAL, Fla — United Launch Alliance (ULA) is preparing to launch an Atlas V 401 rocket with the Air Force’s Global Positioning System (GPS) IIF-4 from Cape Canaveral Air Force Station’s Space Launch Complex 41 (SLC-41) in Florida. Launch is currently set to take place May 15 at 5:38 p.m. EDT. The launch window only extends for 18 minutes. If you are in town and have never watched a launch before, here’s your chance for a rare opportunity.
But where? Which spots provide the best viewing opportunities? Which ones are horrible? What if you’re on a budget? Not all locations are ideal, and while one spot might be perfect to view a certain launch vehicle, given the sheer amount of terrain that Cape Canaveral covers, another location might provide poor viewing.
One of the best spots for those that want to view the launch in person is Playalinda Beach. This is due to the virtually unobstructed view of SLC-41 and, therefore, the Atlas rocket. It only costs $5 to enter the park, which closes at sunset and provides for plenty of time to view this launch. The park can be contacted at: 321-267-1110
For those taking a cruise, Port Canaveral is also a popular viewing spot. In actuality, one can stop at almost any point on SR-528 or SR-401 behind the Port to gain a clear view of launch, as well as to experience the thrill of hearing the roar of the RD-180 engines powering it aloft. Even at a distance of 10 miles you can still hear the rocket’s engines throttle loudly into the black.
Quelle: ULA
.
Update: 16.05.2013
.

A United Launch Alliance Atlas 5 rocket boosted a new Global Positioning System satellite into orbit Wednesday, the latest in a series of upgraded navigation beacons with improved accuracy and longevity.

The Atlas 5's RD-180 first stage engine roared to life and throttled up at 5:38 p.m. EDT (GMT-4), pushing the 188-foot-tall booster away from launch complex 41 at the Cape Canaveral Air Force Station with 860,000 pounds of thrust.
Burning more than a ton of liquid oxygen and highly refined kerosene per second, the rocket quickly accelerated, climbing away on a northeasterly trajectory atop a rushing torrent of fiery exhaust visible for miles around.
The first stage shut down four minutes and four seconds after liftoff and fell away, followed seconds later by ignition of the Centaur's hydrogen-fueled second stage engine.
Generating 22,300 pounds of push, the Pratt & Whitney RL10A engine burned for nearly 13 minutes to put the spacecraft in a preliminary near-circular orbit at an altitude of about 11,050 miles. A second 1.5-minute firing was planned three hours later to put the payload in its operational orbit.
The $121.3 million GPS 2F-4 satellite, the fourth in a series of 12 being built by Boeing, was released from the Centaur second stage three hours and 24 minutes after launch. In a news release, United Launch Alliance declared the launching a success.
Following tests and checkout operations, the 3,600-pound solar-powered satellite will be turned over to the Air Force for operational use.
The new satellite joins a constellation of 30 other Global Positioning System navigation stations operating in six different orbital planes. At least four satellites fly in each plane and multiple spacecraft are above the horizon at any given moment as viewed from any point on Earth.
Each satellite transmits signals that specify its exact orbital location and the exact time, using ultra-precise on-board atomic clocks.
Combining the signals from four or more visible satellites, GPS receivers on the ground, at sea and in the air can compute a user's position, altitude and velocity. Encrypted high-precision military signals are available, along with a slightly less precise public signal used in a wide variety of commercial applications.
The GPS 2F series provide "greater navigational accuracy through improvements in atomic clock technology, a more secure and jam-resistant military signal, an improved (system) that will eventually assist in commercial aviation and search-and-rescue operations, and an onboard reprogrammable processor," said Jan Heide, Boeing program director. "And this is with a 12-year design life for long-term service and reduced operating costs."
Col. Steve Steiner, chief of the Air Force's GPS Space Systems Division in Los Angeles, said the satellites "provide precision, day or night, all-weather, guidance and timing to numerous platforms and weapons that we have."
"GPS is critical to how we fight wars on land, sea and air," he told reporters in a pre-launch news briefing. "Space systems truly are an embedded part of how the U.S. military operates these days."
And the same goes for more familiar commercial applications.
"The timing capabilities of the vehicle are also integral to the U.S. economy," Heide said. "Every ATM transaction that happens essentially is facilitated by GPS timing capabilities. Cellphone is another fantastic example. The ability to walk up and pay at the pump to get gas, fantastic capability.
"It's almost integrated into everything that current societies are accustomed to having," he added. "It's like telephone utility service that people just have an expectation that the satellite and the mission capability are going to be there for them."
Quelle: CBS
.
Frams: Start-Video ULA
.