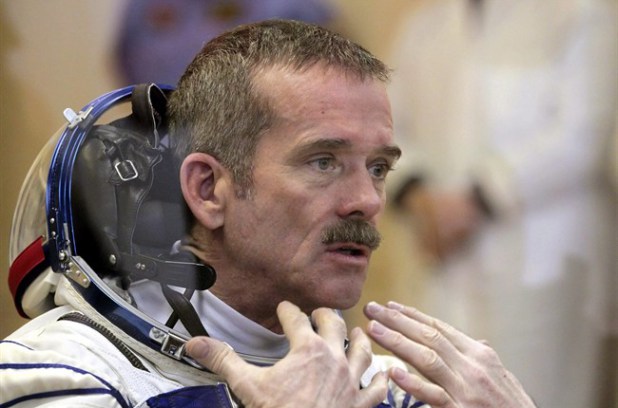 WASHINGTON -- NASA Television will provide live coverage May 12-14 as three crew members aboard the International Space Station end five months in orbit and return to Earth for a scheduled landing May 13.

Expedition 35 Commander Chris Hadfield of the Canadian Space Agency, Tom Marshburn of NASA and Roman Romanenko of the Russian Federal Space Agency (Roscosmos) will undock their Soyuz TMA-07M spacecraft from the station at 7:08 p.m. EDT May 13, heading for a landing on the steppe of Kazakhstan southeast of Dzhezkazgan at 10:31 p.m. (8:31 a.m. Kazakh time, May 14). They will have spent 146 days in space since their Dec. 19 launch from Kazakhstan.

Undocking will mark the official start of Expedition 36 under the command of Pavel Vinogradov of Roscosmos. Vinogradov and his crewmates, Chris Cassidy of NASA and Russian cosmonaut Alexander Misurkin, will tend to the station as a three-person crew for two weeks until the arrival of three new crew members, NASA astronaut Karen Nyberg, Russian cosmonaut Fyodor Yurchikhin and Luca Parmitano of the European Space Agency.

NASA TV coverage will begin Sunday, May 12, with the change of command ceremony between Hadfield and Vinogradov. Coverage will continue May 13 and 14 with Expedition 35 landing and post-landing activities.

Tuesday, May 14:
Noon -- Video file of post-landing activities and interviews

TORONTO – Canadian astronaut Chris Hadfield is packing his bags as he wraps up his five-month mission aboard the International Space Station.

Hadfield tweeted this morning that he “proudly” hands command of the station to Pavel Vinogradov, a Russian cosmonaut.

He also tweeted that it’s “time to rev up the Soyuz” for the trip home.

Plans call for Hadfield and two other crewmembers to leave the station Monday just after 7 p.m. E-T aboard a Russian Soyuz spacecraft.

They’re due to land in Kazakhstan about three and-a-half hours later.

A helicopter will take them to a local airport, where a waiting NASA plane will fly them to Houston, Texas.

The Soyuz spacecraft bearing Expedition 35 Commander Chris Hadfield (seen at left after landing), Soyuz Commander Roman Romanenko (center) and Flight Engineer Tom Marshburn (right) landed at 10:31 p.m. EDT in Kazakhstan. Ground-crew teams will land and begin the process of checking the vehicle and getting the crew out. 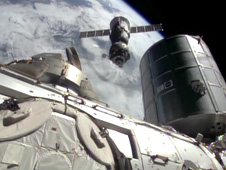 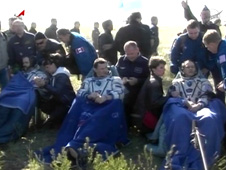 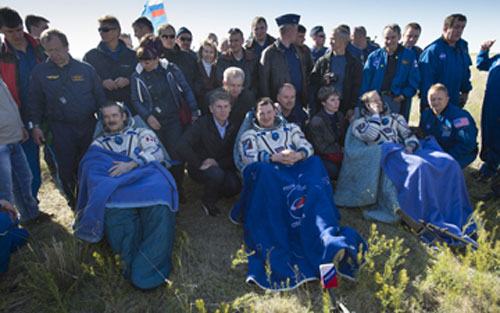 The trio launched aboard the Soyuz TMA-07M spacecraft from the Baikonur Cosmodrome in Kazakhstan in December and spent 144 days living and working aboard the International Space Station.

Romanenko was at the controls of the spacecraft as it undocked at 7:08 p.m. Monday from the Rassvet module.

Vinogradov, Cassidy and Misurkin will remain aboard the orbiting complex as a three-person crew until the May 28 launch and docking of Expedition 36 Flight Engineers Karen Nyberg, Fyodor Yurchikhin, Luca Parmitano.

Hadfield, Marshburn and Romanenko spent their final morning aboard the station Monday packing some final items for return to Earth aboard their Soyuz spacecraft. Marshburn removed a sample canister from a Japanese protein crystal growth experiment and handed it off to his Russian crewmates to stow inside the Soyuz.

With the successful completion of the Binary Colloid Alloy Test-6, or BCAT-6, Hadfield stowed the experiment hardware in the Zarya module. BCAT-6 took a look at how gasses and liquids come together and separate in space. Results from this experiment may lead to improvements in the shelf-life of household products, food and medicine.

Hadfield also assisted Cassidy with a periodic fitness evaluation as flight surgeons keep track of the crew’s health during these long-duration missions. Cassidy exercised on the station’s exercise bike -- the Cycle Ergometer with Vibration Isolation and Stabilization – while Hadfield collected blood pressure measurements.

Cassidy also installed a new HD camera in the Destiny lab and upgraded a video encoder card in an associated computer.