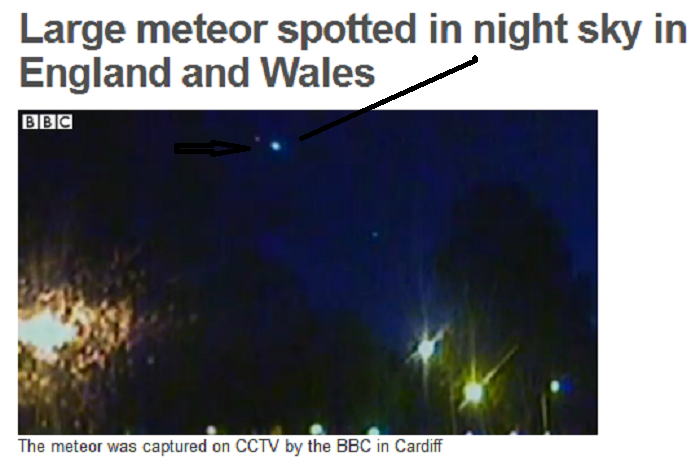 A meteor has been spotted travelling across the night sky by people in many parts of England and Wales.

Sightings of the celestial body were reported on Twitter in areas such as Cornwall, Hampshire, Lancashire, south Wales and Worcestershire.

Suzy Buttress, of Basingstoke, described witnessing the meteor as a "once in a lifetime thing".

Space scientist Dr Maggie Aderin-Pocock said the phenomenon was likely to have been debris from Halley's Comet.

Ms Buttress, who was driving home on the M3 when she saw the meteor, told the BBC: "It was amazing, so big, bigger than a shooting star. It had a strange greenish tinge to it, with a definite tail behind it.

"This was definitely a ball with a tail. It took its time going across the sky. It went behind a cloud, then came out the other end.

"At first I hoped it wasn't an aircraft crashing. It's a once in a lifetime thing."

Richard Escott, a security supervisor for the BBC in Cardiff, explained what he saw.

"I was standing outside having a bit of fresh air and as I turned round I saw this very bright blue light which was dimming," he said.

"It was coming very steadily, progressing across the night sky, but it was at sort of building level and then died out to nothing. I saw it for about five, 10 seconds."

Dr Aderin-Pocock explained what could have caused the spectacle.

"Unfortunately I didn't see this meteor myself, but I think what's unusual is the size of this one. With meteor showers people will see a number of meteors over an hour, so let's say six or 10 an hour.

"It seems that this one was particularly large and particularly bright, which is why it's caught so much attention.

"It's quite likely to be part of the Eta Aquarids, which is the debris left by Halley's Comet.

"And twice a year we pass through the debris left behind by the comet and when this happens we see more of these shooting stars but there must have been a large lump left behind which is what caused such a bright meteor to be seen."