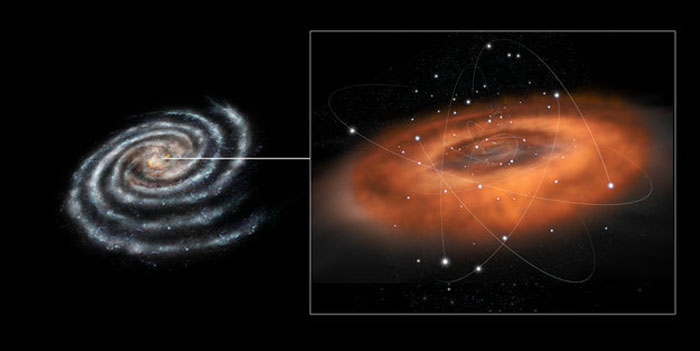 ESA’s Herschel space observatory has made detailed observations of surprisingly hot molecular gas that may be orbiting or falling towards the supermassive black hole lurking at the centre of our Milky Way galaxy.
Our local black hole is located in a region known as Sagittarius A* – Sgr A* – after a nearby radio source. It has a mass about four million times that of our Sun and lies around 26 000 light-years away from the Solar System.
Even at that distance, it is a few hundred times closer to us than any other galaxy with an active black hole at its centre, making it the ideal natural laboratory to study the environment around these enigmatic objects.
Vast amounts of dust lie in the plane of the Milky Way between here and its centre, obscuring our view at visible wavelengths. But at far-infrared wavelengths, it is possible to peer through the dust, affording Herschel’s scientists the chance to study the turbulent innermost region of our Galaxy in great detail.
.

Molecules on the menu at the Milky Way’s black hole
.
Herschel has detected a great variety of simple molecules at the Milky Way’s heart, including carbon monoxide, water vapour and hydrogen cyanide. By analysing the signature from these molecules, astronomers have been able to probe some of the fundamental properties of the interstellar gas surrounding the black hole.
“Herschel has resolved the far-infrared emission within just 1 light-year of the black hole, making it possible for the first time at these wavelengths to separate emission due to the central cavity from that of the surrounding dense molecular disc,” says Javier Goicoechea of the Centro de Astrobiología, Spain, and lead author of the paper reporting the results.
The biggest surprise was quite how hot the molecular gas in the innermost central region of the Galaxy gets. At least some of it is around 1000ºC, much hotter than typical interstellar clouds, which are usually only a few tens of degrees above the –273ºC of absolute zero.
While some of the heating is down to the fierce ultraviolet radiation pouring from a cluster of massive stars that live very close to the Galactic Centre, they are not enough to explain the high temperatures alone.
In addition to the stellar radiation, Dr Goicoechea’s team hypothesise that emission from strong shocks in highly-magnetised gas in the region may be a significant contributor to the high temperatures. Such shocks can be generated in collisions between gas clouds, or in material flowing at high speed from stars and protostars.
“The observations are also consistent with streamers of hot gas speeding towards Sgr A*, falling towards the very centre of the Galaxy,” says Dr Goicoechea. “Our Galaxy’s black hole may be cooking its dinner right in front of Herschel’s eyes.”
.
Quelle: ESA
« Zum vorherigen Eintrag Zum nächsten Eintrag »
4164 Views
Created with page4