A roughly 3.5-mile high Martian mound that scientists suspect preserves evidence of a massive lake might actually have formed as a result of the Red Planet's famously dusty atmosphere, an analysis of the mound's features suggests. If correct, the research could dilute expectations that the mound holds evidence of a large body of water, which would have important implications for understanding Mars' past habitability.
Researchers based at Princeton University and the California Institute of Technology suggest that the mound, known as Mount Sharp, most likely emerged as strong winds carried dust and sand into the 96-mile-wide crater in which the mound sits. They report in the journal Geology that air likely rises out of the massive Gale Crater when the Martian surface warms during the day, then sweeps back down its steep walls at night. Though strong along the Gale Crater walls, these "slope winds" would have died down at the crater's center where the fine dust in the air settled and accumulated to eventually form Mount Sharp, which is close in size to Alaska's Mt. McKinley.
.

Researchers based at Princeton University, the California Institute of Technology and Ashima Research suggest that Mars' roughly 3.5-mile high Mount Sharp (above) most likely emerged as strong winds carried dust and sand into Gale Crater where the mound sits. If correct, the research could dilute expectations that the mound is the remnant of a massive lake, which would have important implications for understanding Mars' past habitability. (Image by NASA/JPL-Caltech/MSSS)
.
This dynamic counters the prevailing theory that Mount Sharp formed from layers of lakebed silt — and could mean that the mound contains less evidence of a past, Earth-like Martian climate than most scientists currently expect. Evidence that Gale Crater once contained a lake in part determined the landing site for the NASA Mars rover Curiosity. The rover touched down near Mount Sharp in August with the purpose of uncovering evidence of a habitable environment, and in December Curiosity found traces of clay, water molecules and organic compounds. Determining the origin of these elements and how they relate to Mount Sharp will be a focus for Curiosity in the coming months.
But the mound itself was likely never under water, though a body of water could have existed in the moat around the base of Mount Sharp, said study co-author Kevin Lewis, a Princeton associate research scholar in geosciences and a participating scientist on the Curiosity rover mission, Mars Science Laboratory. The quest to determine whether Mars could have at one time supported life might be better directed elsewhere, he said.
. 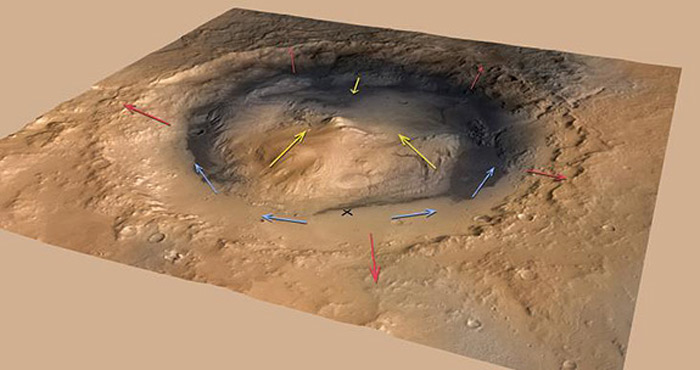 The researchers report that air would have flowed up the crater rim (red arrows) and the flanks of Mount Sharp (yellow arrows) in the morning when the Martian surface warmed, and reversed in the cooler late afternoon. The researchers created a computer model showing that the fine dust carried by these winds could accumulate over time to build a mound the size of Mount Sharp even if the ground were bare from the start. The blue arrows indicate the more variable wind patterns on the floor of the crater, which includes the Curiosity landing site (marked by the "x"). (Image by NASA/JPL-Caltech/ESA/DLR/FU Berlin/MSSS)
.
"Our work doesn't preclude the existence of lakes in Gale Crater, but suggests that the bulk of the material in Mount Sharp was deposited largely by the wind," said Lewis, who worked with first author Edwin Kite, a planetary science postdoctoral scholar at Caltech; Michael Lamb, an assistant professor of geology at Caltech; and Claire Newman and Mark Richardson of California-based research company Ashima Research.
"Every day and night you have these strong winds that flow up and down the steep topographic slopes. It turns out that a mound like this would be a natural thing to form in a crater like Gale," Lewis said. "Contrary to our expectations, Mount Sharp could have essentially formed as a free-standing pile of sediment that never filled the crater."
Even if Mount Sharp were born of wind, it and similar mounds likely overflow with a valuable geological — if not biological — history of Mars that can help unravel the climate history of Mars and guide future missions, Lewis said.
"These sedimentary mounds could still record millions of years of Martian climate history," Lewis said. "This is how we learn about Earth's history, by finding the most complete sedimentary records we can and going through layer by layer. One way or another, we're going to get an incredible history book of all the events going on while that sediment was being deposited. I think Mount Sharp will still provide an incredible story to read. It just might not have been a lake."
. 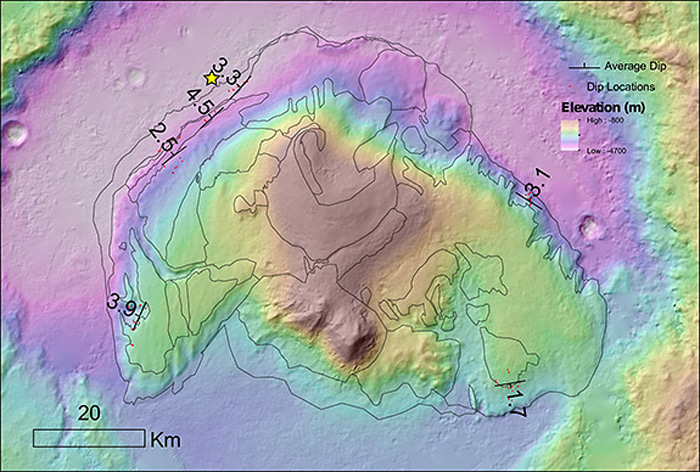 Features of Mount Sharp are more consistent with wind deposition rather than an ancient lakebed, the researchers reported. Satellite images show that the various layers of sediment that make up Mount Sharp likely did not extend to the crater wall and also display a consistent tilt, or "dip," away from the center of the mound. The red dots denote dip areas with the average degree of slope indicated. The yellow star marks the landing site of the NASA Curiosity Mars rover. (Image from Kevin Lewis)
.
Dawn Sumner, a geology professor at the University of California-Davis and a Mars Science Laboratory team member, said that the specificity of the researchers' model makes it a valuable attempt to explain Mount Sharp's origin. While the work alone is not yet enough to rethink the distribution of water on Mars, it does propose a unique wind dynamic for Gale Crater then models it in enough detail for the hypothesis to actually be tested as more samples are analyzed on Mars, Sumner said.
"To my knowledge, their model is novel both in terms of invoking katabatic [cool, downward-moving] winds to form Mount Sharp and in quantitatively modeling how the winds would do this," said Sumner, who is familiar with the work but had no role in it.
"The big contribution here is that they provide new ideas that are specific enough that we can start to test them," she said. "This paper provides a new model for Mount Sharp that makes specific predictions about the characteristics of the rocks within the mountain. Observations by Curiosity at the base of Mount Sharp can test the model by looking for evidence of wind deposition of sediment."
The researchers used pairs of satellite images of Gale Crater taken in preparation for the rover landing by the High-Resolution Imaging Science Experiment (HiRISE) camera onboard the Mars Reconnaissance Orbiter satellite managed by Caltech for NASA. Software tools extracted the topographical details of Mount Sharp and the surrounding terrain. The researchers found that the various layers in the mound did not form more-or-less flat-lying stacks as sediments deposited from a lake would. Instead, the layers fanned outward from the mound's center in an unusual radial pattern, Lewis said.
Kite developed a computer model to test how wind circulation patterns would affect the deposition and erosion of wind-blown sediment within a crater like Gale. The researchers found that slope winds that constantly exited and reentered Gale Crater could limit the deposition of sediments near the crater rim, while building up a mound in the center of the crater, even if the ground were bare from the start, Lewis said.
The researchers' results provide evidence for recent questions about Mount Sharp's watery origins, Lewis said. Satellite observations had previously detected water-related mineral signatures within the lower portion of Mount Sharp. While this suggested that the lower portion might have been series of lakebeds, portions of the upper mound were more ambiguous, Lewis said. First of all, the upper layers of the mound are higher than the crater walls in several places. Also, Gale Crater sits on the edge of Mars' northern lowlands. If it had been filled with water to near the height of Mount Sharp then the entire northern hemisphere would have been flooded.
Soil analyses carried out by Curiosity — the rover's primary mission is two years, but could be extended — will help determine the nature of Mount Sharp and the Martian climate in general, Lewis said. Wind erosion relies on specific factors such as the size of individual soil grains, so such information gleaned from the Curiosity mission will help determine Martian characteristics such as wind speed. On Earth, sediments need some amount of moisture to become cemented into rock. It will be interesting to know, Lewis said, how the rock layers of Mount Sharp are held together and how water might be involved.
"If the mechanism we describe is correct, it would tell us a lot about Mars and how it operates because Mount Sharp is only one of a class of enigmatic sedimentary mounds observed on Mars," Lewis said.
The paper, "Growth and form of the mound in Gale Crater, Mars: Slope wind enhanced erosion and transport," was published in the May 2013 issue of the journal Geology. The work was supported by grants from NASA, Caltech and the Princeton Department of Geosciences' Harry Hess fellowship.
.
Quelle: Princeton University
« Zum vorherigen Eintrag Zum nächsten Eintrag »
4036 Views
Created with page4