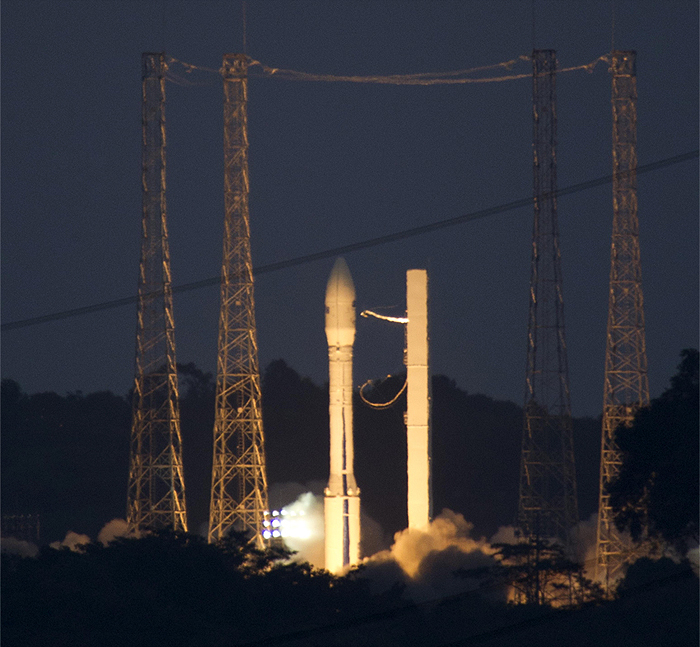 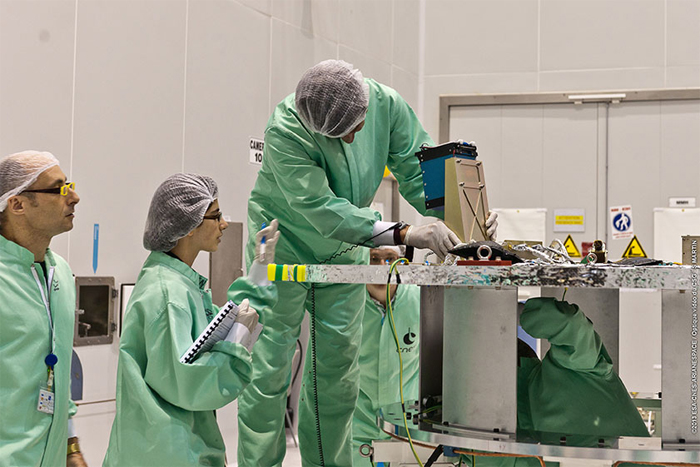 The ESTCube-1 nanosatellite is shown during installation on the P2 Plate of Vega’s payload “stack” (Foto oben). It subsequently was joined on the P2 Plate by VNREDSat-1 (Foto unten), completing the lower component of this upcoming mission’s payload arrangement. 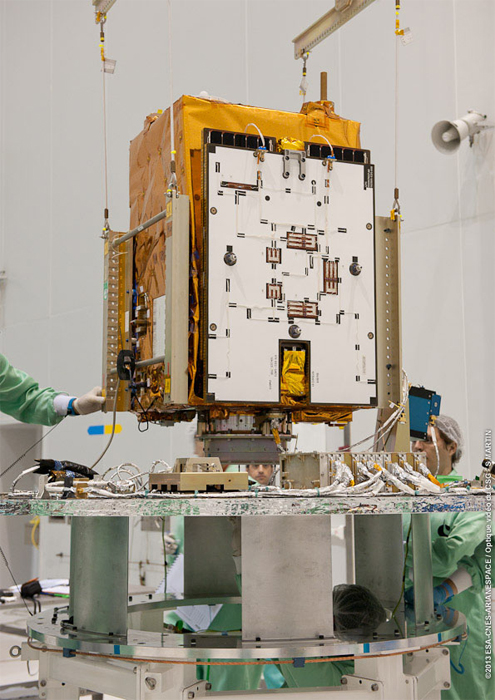 .
Payload integration is underway for Vega’s second mission from the Spaceport
.
The multi-satellite payload “stack” for Vega’s upcoming flight from French Guiana is now taking shape as the Arianespace-managed integration process advances at the Spaceport.
This activity began in the Spaceport’s S5 clean room facility with installation of Estonia’s ESTCube-1 student nanosatellite on a flat mounting surface called the P2 Plate – which serves as the lower interface in the Vega’s payload stack.  The small cube-shaped satellite and its dispenser were integrated using a bracket that was mounted to the P2 Plate.
The next step was the placement of Vietnam’s VNREDSat-1 with its interface adapter on the P2 Plate, joining ESTCube-1.
Both satellites are located in the payload stack’s lower position, and will ride inside a larger dispenser system called VESPA.  Completing the payload arrangement will be installation of the mission’s third satellite – Proba-V – which is to ride atop the VESPA dispenser.
Proba-V will have a mass at liftoff of 160-kg., and is to monitor global vegetation growth.  Produced by prime contractor QinetiQ Space Belgium for the European Space Agency, the satellite is equipped with a newer version of the Vegetation imaging instrument that previously operated on the Spot series of Earth observation satellites – which also were orbited by Arianespace.
VNREDSat-1 is to support the Vietnamese government’s initiative to create an infrastructure enabling better studies of climate change effects, improving predictions for natural disasters and optimizing the country’s natural resource management.  Weighing 120 kg. for liftoff, it was built by Astrium on behalf of the Vietnam Academy of Science and Technology.
The 1.3-kg. ESTCube-1 cubesat was designed to test electric solar wind sail technologies, as well as help establish an Estonian infrastructure for future space projects. It was built by a collaboration of students from Tartu University, Estonian Aviation Academy, Tallinn University of Technology and University of Life Sciences – and was developed in conjunction with the Finnish Meteorological Institute and the German Space Center (DLR).
Vega’s upcoming mission – designated Flight VV02 in Arianespace’s launcher family numbering system – is scheduled for liftoff from the Spaceport on May 2.  This will be the second launch for Arianespace’s new lightweight vehicle and is being conducted in conjunction with the European Space Agency’s VERTA (Vega Research and Technology Accompaniment) program.
Quelle: arianespace
.
Update: 22.04.2013
. 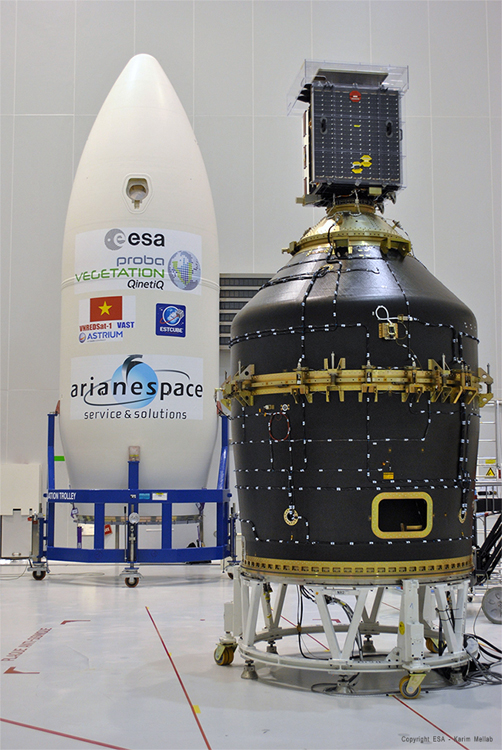 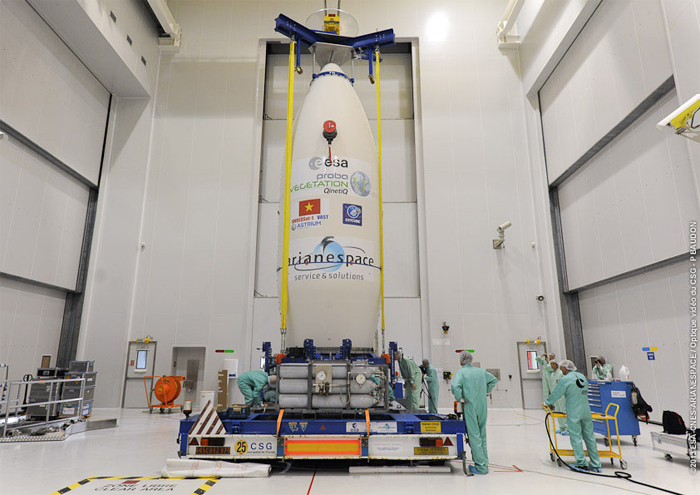 The integrated payload stack is readied for its transfer from the Spaceport’s S5 preparation facility to the ZLV launch site for Vega.
.
The payload “stack” for Vega’s second mission from French Guiana has been completed and is ready for installation on the lightweight launch vehicle at the Spaceport.
This milestone completes the integration of all three payloads to be orbited on the May 2 mission, and underscores the capabilities of Arianespace’s latest launcher family member to accommodate a variety of satellite passengers.
The payload stack begins with Vietnam’s 120-kg. VNREDSat-1 and the 1.3-kg. ESTCube-1 Estonian student nanosatellite, which are positioned inside a dispenser container system called Vespa.  Installed atop the Vespa dispenser is Proba-V, a 160-kg. spacecraft for the European Space Agency (ESA).
To complete the integration process, the payload stack was encapsulated inside Vega’s payload fairing – readying it for transfer from the S5 preparation facility to the Spaceport’s ZLV launch site.
The May 2 flight – which follows Vega’s qualification mission in February 2012 – marks the debut of Europe’s VERTA (Vega Research and Technology Accompaniment) program – which is to demonstrate the light-lift vehicle’s flexibility and versatility.  At a planned minimum of two launches annually, this ESA program will allow the smooth transition of Vega into Arianespace’s commercial operations.
After its deployment by Vega on the upcoming flight, Proba-V will begin the satellite’s mission of mapping land cover and vegetation growth across the Earth every two days. The miniaturized ESA satellite is to provide data for the instrument’s worldwide scientific user community and service providers once its in-orbit commissioning is completed.
Proba-V was produced by prime contractor QinetiQ Space Belgium and carries a new, advanced version of the Vegetation instrument – the latest in a series already deployed on France’s full-sized Spot-4 and Spot-5 satellites, which have been observing the planet since 1998 after their launches by Arianespace.
The Astrium-built VNREDSat-1 will support the Vietnamese government’s initiative to create an infrastructure enabling better studies of climate change effects, improving predictions for natural disasters and optimizing the country’s natural resource management.  It was built on behalf of the Vietnam Academy of Science and Technology.
ESTCube-1 is to test electric solar wind sail technologies and help establish an Estonian infrastructure for future space projects. This satellite was produced in a collaboration of students from Tartu University, Estonian Aviation Academy, Tallinn University of Technology and University of Life Sciences – and developed in conjunction with the Finnish Meteorological Institute and the German Space Center (DLR).
Once in orbit, ESTCube-1 will deploy a small conductive tether which is to be electrically charged to 500 Volts using electron guns contained within the 10 x 10 x 10-cm. cubesat.
Quelle: arianespace
.
Update: 26.04.2013
.
Arianespace VV02 – Proba-V, VNREDSat-1 and ESTCube-1: Launch postponed by 24 hours
Evry, April 25, 2013
To carry out additional checks on the mobile gantry system used on the Vega launch complex (SLV), the European Space Agency (ESA) and Arianespace have decided to postpone the Vega launch VV02 for 24 hours. It was originally scheduled for the night of May 2 to 3.
Liftoff is scheduled for the night of May 3 to 4, 2013, at exactly:
11:06:31 pm (local time in French Guiana, on May 3, 2013)
10:06:31 pm (Washington, DC)
02:06:31        (UTC) on May 4, 2013
4:06:31 am   (Paris)
9:06:31 am   (Hanoi)
.
Update: 28.04.2013
.

ESA’s Vega VV02 rocket is now fully assembled on its launch pad, 22 April, 2013. Final preparations are in full swing for the rocket’s flight.

Vega VV02 is the first of the five flights scheduled in ESA’s Vega Research and Technology Accompaniment – VERTA – programme, which aims to demonstrate the flexibility of the launch system. At a minimum rate of two launches per year, the programme will allow the smooth introduction of Vega for commercial exploitation.

VV02 will loft Proba-V, the first of four ESA missions, into space. Proba-V carries a reduced version of the Vegetation instrument currently flying on the Spot satellites to provide a daily overview of global vegetation growth.
This first VERTA flight will also demonstrate Vega's capability to launch multiple payloads. The second payload is the Vietnam Natural Resources, Environment and Disaster Monitoring Satellite (VNREDSAT) built by Astrium for the Vietnamese government. 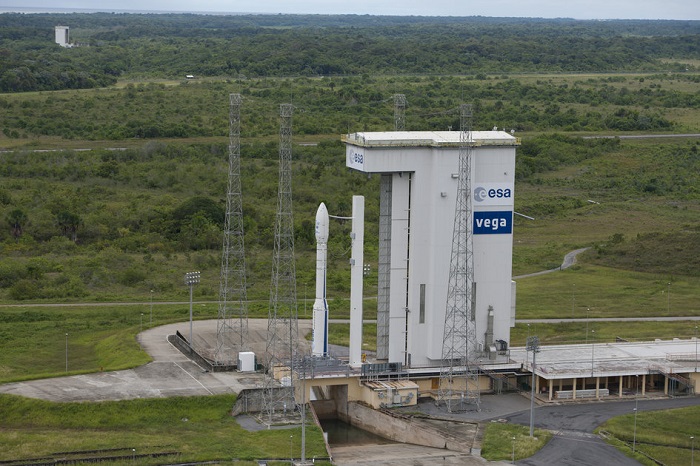 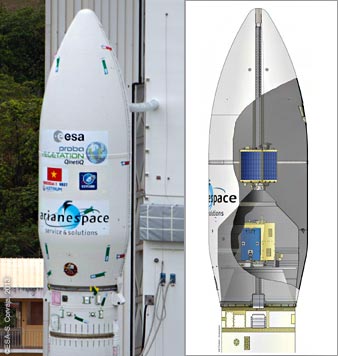 The VV02 mission’s three satellite passengers are encapsulated in the Vega payload fairing, which is shown in an aerial photo of the Spaceport’s SLV launch site (photo at left) and illustrated by the cutaway drawing at right.

The second Vega mission from French Guiana has been given its “green light” for liftoff tomorrow night, following completion of the launch readiness review earlier today at the Spaceport.

This assessment – held prior to each flight of an Arianespace launcher family member – confirmed that the lightweight vehicle and its multi-passenger payload are flight-ready, along with the Spaceport’s infrastructure and the network of downrange tracking stations.
The mission is designated VV02 in Arianespace’s numbering system, and it will be performed from the Spaceport’s SLV launch site – where the Vega was assembled and now stands in a flight-ready configuration, protected by a mobile gantry that will be withdrawn prior to liftoff.
All is set for a May 3 launch beginning precisely at 11:06:31 p.m., local time at the Spaceport in French Guiana, with the flight lasting 2 hours, 48 seconds from liftoff to separation of the final spacecraft in its payload “stack” – which is composed of the Proba-V, VNREDSat-1 and ESTCube-1 satellites.
Proba-V – produced by prime contractor QinetiQ Space Belgium for the European Space Agency – is to be deployed first in the flight sequence, injected from its position atop Vega’s VESPA (Vega Secondary Payload Adapter) dispenser system.
It will be followed by release of the two spacecraft riding inside the VESPA dispenser: VNREDSat-1, which was manufactured by Astrium on behalf of the Vietnam Academy of Science and Technology (VAST); and the ESTCube-1 cubesat that was built by a collaboration of students from Tartu University, Estonian Aviation Academy, Tallinn University of Technology and University of Life Sciences – and developed in conjunction with the Finnish Meteorological Institute and the German Space Center (DLR).
Tomorrow’s Vega launch is part of multiple missions in the European Space Agency’s VERTA (Vega Research and Technology Accompaniment) program, which is to demonstrate the launch system’s capabilities in orbiting small- to medium-sized satellites.  Vega was developed in a European program led by Italy’s ASI space agency and industrial prime contractor ELV SpA.
With Vega as a member of Arianespace’s launcher family, the company is able to launch payloads of all sizes – operating this lightweight vehicle along with the medium-lift Soyuz and heavyweight Ariane 5 in side-by-side operations from the Spaceport.

High-altitude winds over the Spaceport in French Guiana have resulted in the decision by Arianespace and the European Space Agency to postpone tonight’s Vega mission with three satellite payloads.

This postponement was based on strict safety conditions applied for Arianespace launch operations.  The Vega vehicle and its three spacecraft passengers – Proba-V, VNREDSat-1 and ESTCube-1 – remain in a safe, standby mode at the Spaceport’s SLV launch site.

A new launch date will be decided based on the evolution of the weather conditions.

The Proba-V passenger for this mission is a 160-kg. European Space Agency spacecraft, designed to map land cover and vegetation growth across the Earth every two days.  Produced by prime contractor QinetiQ Space Belgium, it carries an advanced version of the Vegetation instrument.

VNREDSat-1 is a 120-kg. optical satellite for Vietnam, designed to support the country’s creation of an infrastructure to enable better studies of climate change effects, improving predictions for natural disasters and optimizing natural resource management.  It was built by Astrium on behalf of the Vietnam Academy of Science and Technology (VAST).

Joining these two payloads is Estonia’s ESTCube-1 student nanosatellite, which will test electric solar wind sail technologies and help establish the basis infrastructure for future Estonian space projects.  The 1.3-kg. cubesat was produced in a collaboration of students from the Estonian Aviation Academy, Tallinn University of Technology, Tartu University and the University of Life Sciences – and developed in conjunction with the Finnish Meteorological Institute and the German Space Center (DLR). 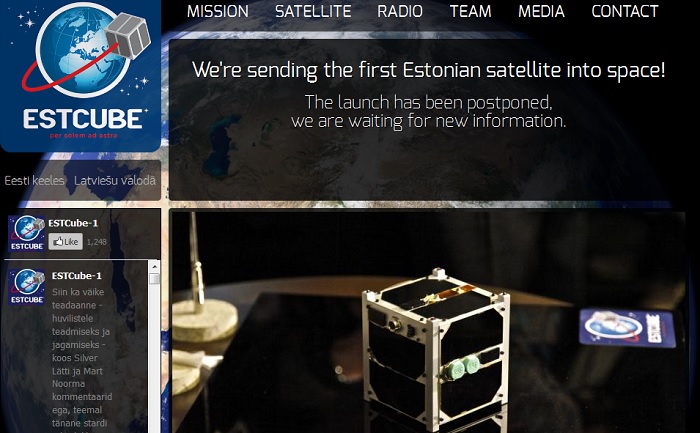