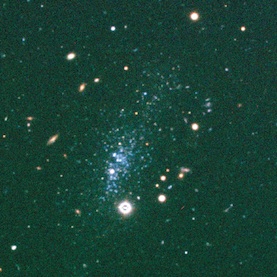 HELLO, NEIGHBOR: The newfound galaxy Leo P, which lies some five million light-years away from the Milky Way. Image: From Katherine L. Rhode et al. in The Astronomical Journal, vol. 145, page 149; 2013. Reproduced by permission of the AAS.

In recent years astronomers have extended their view almost to the very edge of the observable universe. With the venerable Hubble Space Telescope researchers have spotted a handful of galaxies so faraway that we see them as they appeared just 400 million years or so after the big bang.

But even as astronomers peer ever deeper into the universe to explore the cosmic frontier, others are finding new realms to explore in our own backyard. Such is the case with Leo P, a dwarf galaxy that astronomers have just discovered in the Milky Way’s vicinity. At a distance of some five million or six million light-years from the Milky Way, Leo P is not quite a next-door neighbor, but on the vast scales of the universe it counts as a neighbor nonetheless.

Intriguingly, Leo P seems to have kept to itself, rarely if ever interacting with other galaxies. So the discovery, detailed in a series of studies in The Astronomical Journal, offers astronomers a rare glimpse at a cosmic object unsullied by disruptive galactic encounters. It also suggests the presence of other small galaxies that await discovery in our corner of the cosmos.

Leo P is one of just a few dozen local galaxies that does not swarm around the Milky Way or its massive sibling Andromeda, each of which has been extensively scanned for companion galaxies in recent years. “There has been a massive increase in the number of these nearby galaxies” around the Milky Way and Andromeda, says astronomer Alan McConnachie of the National Research Council Canada’s Herzberg Institute of Astrophysics, who did not contribute to the new research. “There have really been very, very few discoveries of dwarfs that are sort of sitting out in the middle of nowhere.” Those lonely dwarf galaxies, such as Leo P, are hard to spot because they are faint, distant, and could be found anywhere on the sky.

In its cosmic isolation the newfound galaxy appears to have led a relatively serene life, undisturbed by the tugs and twists imparted by the gravitational pull of a larger galaxy. “It is a product of a sedate environment, away from major galaxies,” says Riccardo Giovanelli of Cornell University, one of the astronomers who discovered Leo P. He and his colleagues first spotted it as a cloud of hydrogen gas with the Arecibo Observatory radio telescope in Puerto Rico, then confirmed the discovery with optical telescopes at Kitt Peak National Observatory in Arizona, which identified individual stars within the galaxy.

Compared with the Milky Way, Leo P is a true pip-squeak. Its stars may number in the hundreds of thousands whereas the Milky Way has hundreds of billions. Nevertheless, Leo P is actively making new stars—it contains a number of bright, blue, newly formed stars as well as a region of ionized gas that indicates the presence of a luminous young star. Its large gas reservoir and current star formation are unusual for such a small galaxy—many of its ilk have had their star-making gas stripped away during encounters with bigger galaxies.

By definition, dwarf galaxies are tiny, McConnachie notes. “So they’re very sensitive to the things that are going on around them. They get harassed, they get pulled apart, they get stripped of their gas,” he says. “Chances are, when we look at a galaxy like Leo P, we’re seeing how a dwarf galaxy should look if left to its own devices.” Indeed, the “P” in the galaxy’s name stands for “pristine”; the rest refers to the galaxy’s location in the constellation Leo as viewed from Earth.

Large galaxies such as the Milky Way grow by pulling in and cannibalizing dwarf galaxies that draw too close, so the study of small galaxies can shed light on how the giants of the cosmos came to be. “The small galaxies and the big galaxies have kind of a shared history, if you like,” McConnachie says. “But all the [dwarfs] that we see have sort of been too messed up to tell us much about the intrinsic properties of the small galaxies.”

The discovery of the pristine Leo P could be a bit of a happy accident—its current bout of star formation made the galaxy stand out. “If there hadn’t been some of these bright young blue stars—and they only have lifetimes in the millions of years, not the billions of years—it would have been much harder to pick up this thing,” says astronomer Katherine Rhode of Indiana University Bloomington, who led the optical observations of the galaxy.

Astronomers may soon know whether other, similar objects lurk nearby. In a new study in The Astrophysical Journal, Giovanelli and two colleagues catalogued 59 additional clouds of gas that were spotted in the same sky survey that unearthed Leo P. On further inspection some of those clouds may also prove to be low-mass galaxies that are faint enough to have so far escaped notice. “We have many dozens of these objects now,” Giovanelli says. “We’re going to see which we can pull out of the muck.”